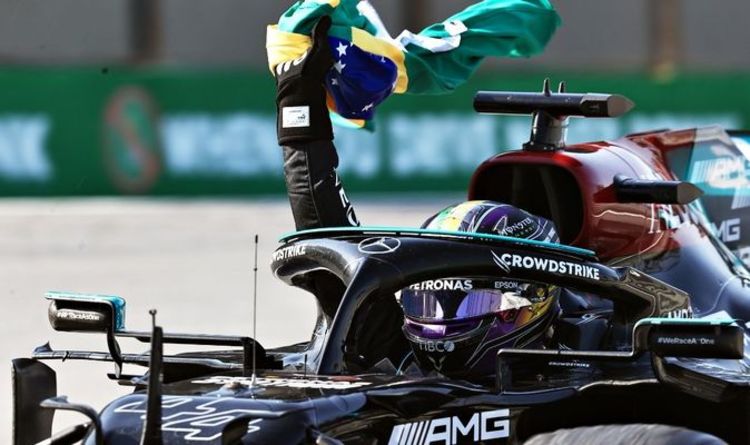 Lewis Hamilton has been fined £4,200 (5000 euros) after being summoned to the stewards for the second time this weekend after an alleged breach of his “use of safety belts”. Hamilton waved to the crowds on his cool-down lap after winning the Brazilian Grand Prix and stopped off to the Brazilian flag from a steward.

After a superb performance to beat his main title rival Max Verstappen, the clasp of Hamilton’s seatbelt appeared visible from onboard footage as the car was still moving, so he could receive the flag as he made his way to parc ferme.

But the Stewards said: The driver of car 44, Lewis Hamilton, undid his seat belts on the in-lap at the end of the race.

“While the Stewards are sympathetic to the desire to celebrate, it is fundamentally unsafe to undo the seatbelts while the car is in motion.

“Slow speeds in these cars are very fast for an unrestrained occupant. Further, Formula 1 drivers set the example for junior categories. It is critical that junior category drivers learn the importance of using all the safety devices of the car at all times.

“The suspension of the penalty is subject to compliance with Appendix L, Ch. III of the ISC during the period specified.”

JUST IN:
Max Verstappen’s ‘FIFA points’ to take a hit after huge punishment

It’s the second time this weekend Hamilton has been summoned to the stewards after being thrown out of qualifying after Friday’s session due to a rear wing infringement.

A post-session technical check into the Mercedes rear wing showed the DRS was found to be opening the wing more than the permitted distance, with Hamilton stripped of his fastest time in Brazil and was forced to start the sprint race from the back of the grid.

The stewards have been busy across the weekend after video footage appeared on Friday of Red Bull’s Verstappen touching the back of Hamilton’s Mercedes when it was under strict parc ferme conditions.

Verstappen was then hit with a hefty £42,500 (€50,000) fine ahead of the sprint race for breaching parc ferme rules, yet the Dutchman was able to see the funny side of it.

He said: “It’s quite a big fine, so I hope they have a nice dinner and a lot of wine. I hope good expensive wine, that would be nice. They can invite me for dinner as well. I’ll pay for that dinner too.”

Hamilton pulled off a superb win at Interlagos after another fierce battle with Verstappen during the latter few laps of the race.

Hamilton, who qualified P5 but started P10 due to an engine change ahead of the weekend, carved his way through the field to take the fight to Verstappen.

During the second pit stop stint, Hamilton found himself side-by-side Verstappen on lap 48, on fresher tyres than the Dutchman, battling for the lead.

The pair went wheel-to-wheel into Turn 4, with the seven-time world champion on the outside of the track as Verstappen looked to keep control of the race.

But Hamilton seemed to be pushed wide, as Verstappen held on a few laps longer in front.

The incident was deemed a racing incident by the stewards and was not worthy of an investigation.

Hamilton, who was left frustrated by the decision, continued his pursuit on Verstappen before eventually taking the lead on lap 54.

It means the 36-year-old cut Verstappen’s lead to just 14 points heading into the final three races.