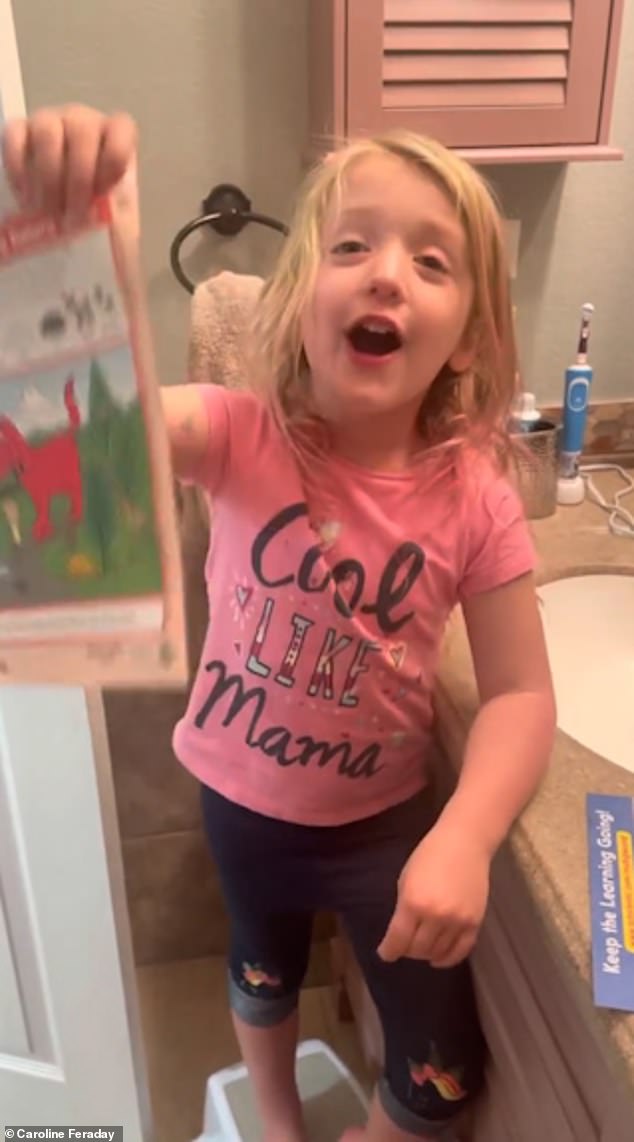 What did she say? Hilarious moment little girl struggles to say ‘Kirk’ during naming game and it sounds MUCH ruder

By Elmira Tanatarova For Mailonline

A three-year-old gave her mother a scare as she came up with a new name for Clifford the Big Red Dog.

In a hilarious clip shared by Caroline Feraday, 43, who lives with her daughter Elsie Feraday-Fields in Agora Hills, Los Angeles, the young girl can be heard renaming the beloved children’s book character ‘Kirk’, but her pronunciation makes it sound like a rude word.

The panicked mother asked her daughter to repeat herself before realising what she’s saying in the video shared on December 3.

The young girl and her mother, who live in Agora Hills, Los Angeles, play teacher as three-year-old Elsie gets her mother to name Clifford the Big Red Dog

In the short clip, Elsie, playing teacher, points to a picture of Clifford on a magazine and says ‘tell me who’s name this is’.

Satisfied, the young girl pulled out another picture of Clifford and asked yet again for a name.

Elsie Feraday-Fields, 3, points to different pictures of the dog and asks her mother for a name

The three-year-old has different names for the dog, including Elsie and Kirk

When her mother tried to answer as she did last time, Elsie objected.

Feraday then tried ‘Difford the big red cog’, which was also shot down by her daughter who informed her that the dog is in fact called ‘Elsie’.

Pulling out yet another picture of Clifford, the three-year-old then announced: ‘Call this one Kirk.’

Faraday, who appears to do a double-take at this, then asks: ‘Pardon?’

Elsie with her mother Caroline Feraday, 43. They are both from Kent but live in Los Angeles

Elsie calls one of the Cliffords Kirk, but her pronunciation makes it sound much ruder

Her mother says that Elsie has a;ways ‘been very, very funny’

In the video she then gets Elsie to repeat the name over and over before realising her daughter isn’t saying a rude word.

‘That’s a relief,’ Faraday can be heard saying.

Faraday, a radio broadcaster who is originally from Kent as is her daughter Elsie, said: ‘She’s just always been very, very funny and had quite a sense of humour.

‘With Clifford, it was just making me chuckle that she was playing teacher to be honest which is why I was filming it.

‘And and then she wanted to get more imagination involved.