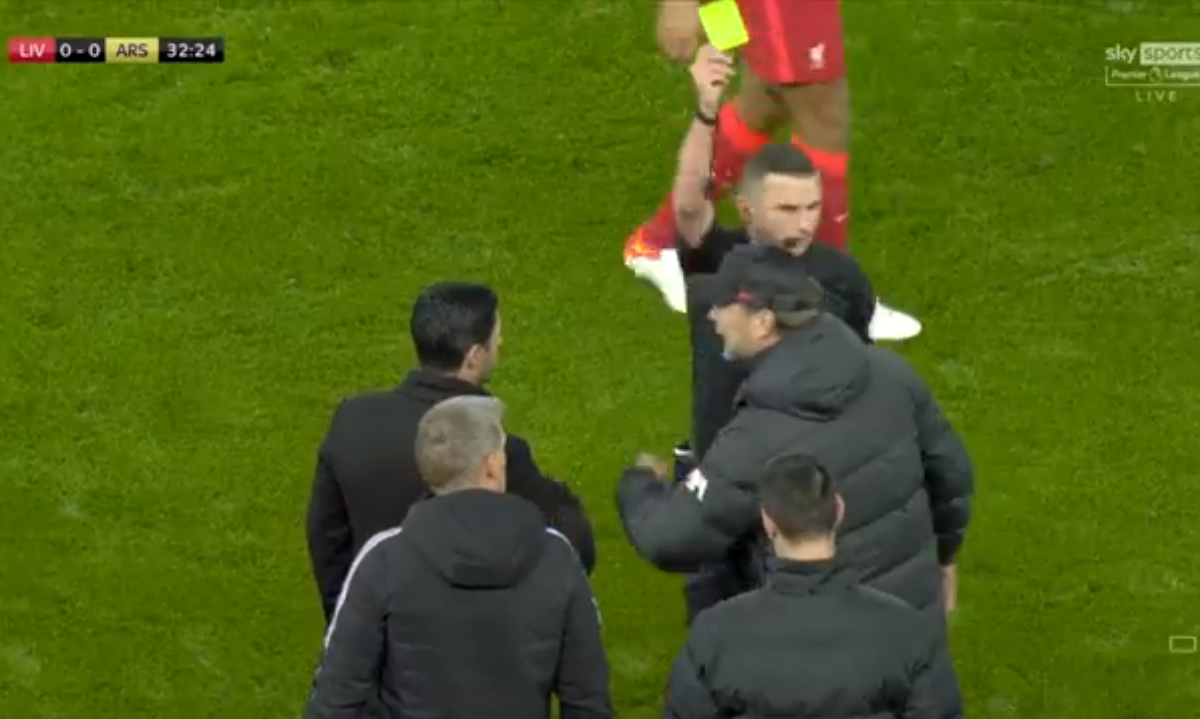 Jurgen Klopp has revealed the reason why he and Mikel Arteta clashed during the first half of Liverpool’s dominant 4-0 victory over Arsenal at Anfield.

The Reds sprung into life to seal an impressive victory after a touchline scuffle between the two managers, where the Gunners boss could be seen telling Klopp to ‘f*** off’.

Sadio Mane opened the scoring late in the first half before the hosts ran away with it after the break as Diogo Jota, Mohamed Salah and substitute Takumi Minamino – with his first touch – all got on the scoresheet at Anfield.

And Klopp admitted to talkSPORT he saw red because he thought Arteta and other members of the coaching staff were trying to influence the referee to get Mane booked after he caught Takehiro Tomiyasu with a rogue elbow.

The Senegal ace did receive a yellow card, but Klopp says he couldn’t understand what Arteta was trying to achieve with his protests.

“With the situation, Sadio didn’t touch the player,” the German said the incident.

“Then they go up and ask for a yellow card. It happens against Sadio so often. It happened against Real Madrid last year and he couldn’t do anything because the ref was on him saying ‘one more thing and your off’.

“For an offensive player, he’s not a hard player or crazier tackler.

“For Atletico here [at Anfield], we had to take him off at half time because they tried to decrease our number here.

“I just asked: ‘What do you want in that situation? To show yellow cards for no contact, otherwise it would be a crazy game.”

Arteta insisted both managers were merely trying to back up their own team as he played down the severity of the incident.

“That stays on the pitch, that’s it and we shook hands after.”

Last time out before the international break the Reds lost their 26-game unbeaten run with defeat at West Ham but bounced back in some style by clinically taking apart the Gunners as their 10-match streak without defeat ended.

Asked if his side’s display was perfect by talkSPORT’s Sam Matterface, Klopp added: “No. Perfection was not the word I had in my mind since the game finished but I thought we did really well.

“We cannot take these kind of performances and goals for granted and we will not, but the international break is not a great time.

“It’s not just a problem for us, but we lost the last game and the boys go all over the planet.

“Then they came back and it’s bits and bobs there and we have just one session to prepare the for game against the in-form side in the league. So it’s tricky.”