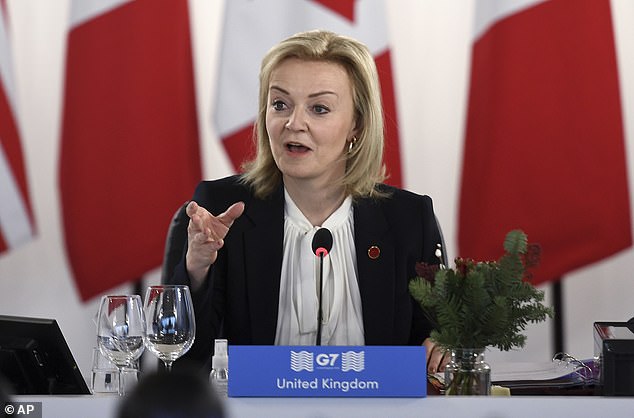 She expressed ‘deep concern’ about the build-up of Russian troops at the border, saying that the UK would seek to damage Russia’s economy in the event of any incursion by Moscow.

Her strong message came as she hosted her counterparts in Liverpool in a show of Western unity against Russia, China and Iran.

She told allies from the US, Canada, France, Germany, Italy and Japan of the need to ‘defend ourselves against the growing threats from hostile actors’.

‘We need to come together strongly to stand up to aggressors who are seeking to limit the bounds of freedom and democracy,’ she added.

Speaking at the G7 summit in Liverpool on Friday, Foreign Secretary Liz Truss (pictured) expressed ‘deep concern’ about the build-up of Russian troops at Ukraine’s border

Last week, US intelligence revealed that President Vladimir Putin has amassed in excess of 100,000 troops near Ukraine’s border, and has begun plans for a possible invasion, to take place as early as next year.

US President Joe Biden spoke to Boris Johnson and the leaders of Germany, Italy and France – dubbed the Nato ‘Quint’ – twice last week, as Western leaders deliberated on how to deal with the threat.

Ms Truss said it would be a ‘strategic mistake’ for President Putin to send troops across the border, adding: ‘What the G7 meeting is about is a show of unity between like-minded major economies that we are going to absolutely be strong in our stance against aggression with respect to Ukraine.’

She added: ‘There will be severe consequences if anything were to happen. And we’re building security and economic relationships with like-minded partners, including Ukraine, to protect them in the future.’

President Putin invaded the Crimea and annexed it in 2014, when tensions between Russia and Ukraine flared after protesters ousted the pro-Moscow government in Kiev.

Last week, US intelligence revealed that President Vladimir Putin (pictured) has amassed in excess of 100,000 troops near Ukraine’s border, and has begun plans for a possible invasion

Moscow has denied planning to invade Ukraine, saying it is ‘alarmed’ by the Western push to supply Kiev with weapons.

Ms Truss said Britain would also be pushing for an alternative to Russian gas supplies in a bid to establish stronger energy security in Europe.

She said: ‘There have been decisions made by the free world in the short term to obtain cheap energy or cheap financing, and that has a long-term cost for freedom and democracy. We can’t make that mistake again.’

Her comments may have been directed at countries such as Germany, which is dependent on Russian gas.

It also appears that she may have been referring to Britain itself, which over the years has become a haven for Russian state-backed oligarchs, who have invested billions in the City and in the London property market, earning the capital the nickname ‘Londongrad’.

America will send its top diplomat for Europe, Karen Donfried, to Kiev and Moscow this week to ‘reinforce the US’s commitment to Ukraine’s sovereignty,’ the State Department announced.

Ms Truss will also discuss ways of building alliances against China, meeting ministers from the Association of Southeast Asian Nations.

The G7 launched its ‘Build Back Better World’ initiative to offer developing nations in Asia and Africa funding for massive infrastructure projects, as an alternative to China’s Belt and Road Initiative.

Ms Truss told her G7 counterparts that democracies needed to fight ‘economic coercion’ and ‘win the battle of technology’ – both pointed references to Beijing’s growing influence around the globe.

Ms Truss and US Secretary of State Anthony Blinken also discussed how to revive the ailing Iran nuclear deal, and both indicated that if the Islamic Republic signed up to the deal, there may be a possible loosening of sanctions.

The Foreign Secretary warned that the nuclear talks taking place in Vienna are ‘the last chance for Iran to sign up’ again to the deal.