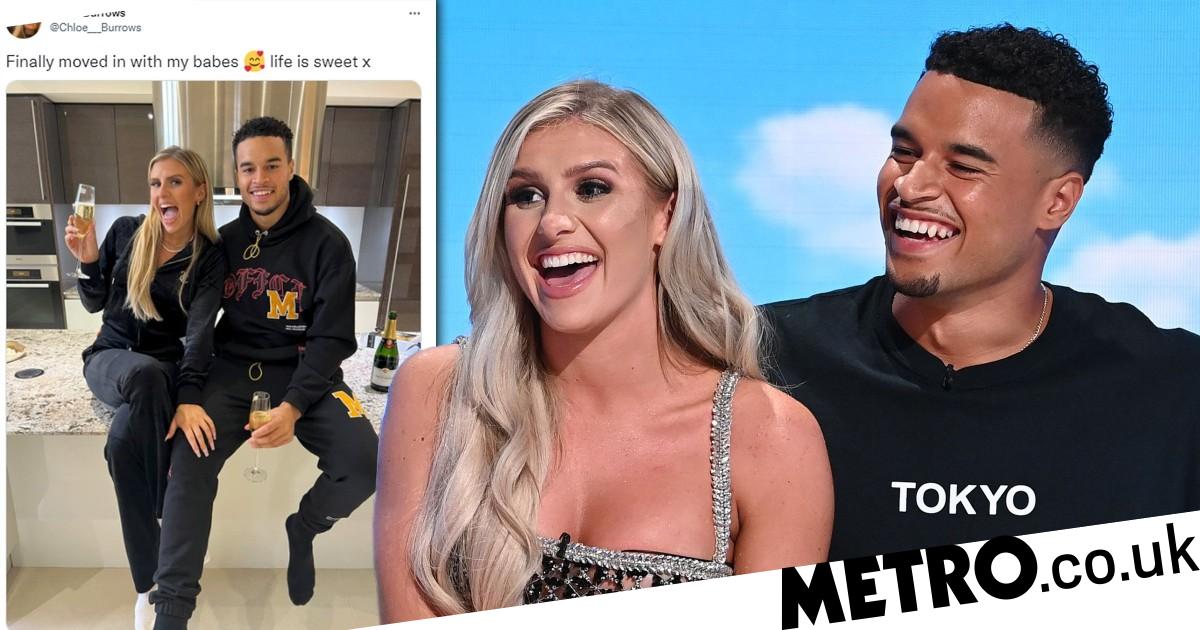 Love Island stars Chloe Burrows and Toby Aromolaran have officially moved in together after four months of dating.

Chloe, 26, who was recently announced as JD’s first-female brand ambassador, shared a cute pic of her and the 22-year-old football player in their new digs on social media.

In an Instagram post, the loved-up couple were all smiles, as they posed on their kitchen counter with a glass of champagne. No better way to celebrate than with a bottle of bubbly!

The star also shared the same picture on Twitter and captioned the post: ‘Finally moved in with my babes, life is sweet x.’

Toby echoed Chloe’s snap and wrote: ‘Cheers to us finally moving in.’

The stars were runner-ups in this year’s series of Love Island, which saw Millie Court and Liam Reardon win, and they have been just as smitten with each other ever since.

Their fellow co-stars were quick to congratulate the pair, Liberty Poole said: ‘Congrats you naughty twosome!’

Abi Rawlings, who was coupled up with Toby on the show, also replied saying: ‘Proper grown up stuffs that!! Congrats my lovelies.’

Chloe and Toby have been living the dream since leaving the villa back in August, with Chloe working the sports-fashion brand, heading to festivals, and even jetting off to Dubai.

Toby recently celebrated a collaboration with online retailer BoohooMAN, speaking to Metro.co.uk, he said: ‘It’s incredible, I like to wear [the collection] and other people say they like to wear it as well, it’s a nice feeling.’

Looks like this year’s islanders are all in sync, as winners Millie and Liam recently celebrated moving into their ‘perfect’ £1million home.

Faye Winter and Teddy Soares have also moved in together, and they both posed in a series of snaps on their stunning new staircase, which splits in two directions towards the upper floor.

Love Island is available to stream on ITVHub now.

MORE : Love Island’s Olivia Attwood is not fussed about having kids yet: ‘I find children boring’