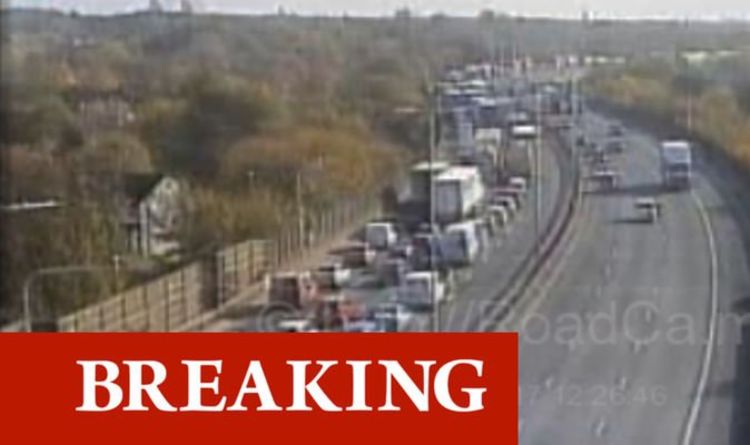 The 71-year-old woman was travelling in a Kia, one of three vehicles involved in the northbound smash between junction 17 for Sandbach, Cheshire, and junction 18 for Holmes Chapel in the same county. The woman died at the scene of the collision, which happened on Saturday at around 12.30am.

A 49-year-old woman from Lancashire was taken to hospital after suffering serious injuries, reports Cheshire Live.

Police confirmed they’ve arrested a 41-year-old man from Stockport, Greater Manchester, who has since been released under investigation.

The fatal victim, who was from Burscough, Lancashire, is yet to be named publicly by police.

A spokesman for Cheshire Police said today: “At 12.30am on Saturday, October 30, police were called to a collision on the M6 northbound carriageway between junction 17 to junction 18.

“The collision involved three vehicles – a Mercedes, Kia and HGV.

“A passenger in the Kia died at the scene.

“The family of the 71-year-old woman, from Burscough, has been informed and is being provided support by specialist officers.

“A 49-year-old woman from Lancashire sustained serious injuries and was taken to hospital by ambulance.

“He has been released under investigation.”

Cheshire Fire and Rescue Service confirmed that four engines were sent out to the scene.

A spokesperson said: “The collision involved two vehicles on the northbound carriageway between junction 19 to junction 18.

“Crews extricated two passengers from a vehicle. The woman and man were handed to the care of paramedics. Air ambulance attended to a third person.”

It is the second fatal crash on the M6 between junctions 17 and 18 in recent months after a lorry driver died in September when his vehicle collided with a railway bridge.