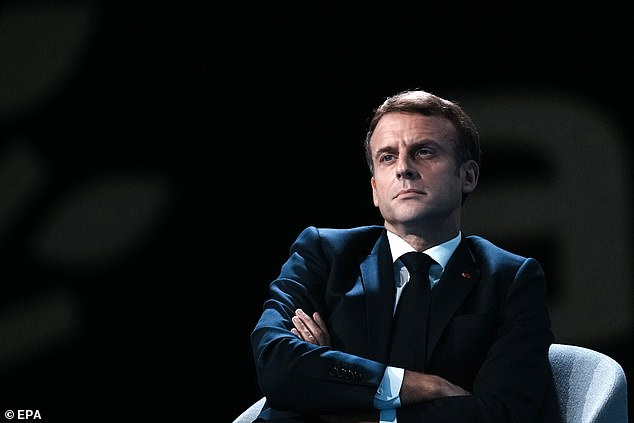 Emmanuel Macron delivered a stinging rebuke at UK ‘provocation’ over the Channel migrant crisis today warning that the UK must accept people who want to reunite with family.

And he pledged to use Paris’s rotating presidency of the EU to ramp up work to address the origins of the crisis.

The intervention came amid increasing pressure on Ms Patel and Boris Johnson to find a way of stemming the numbers arriving illegally on British shores.

One senior MP told MailOnline it had been one of the most significant sources of unrest when the PM appeared before the Tory backbench 1922 committee earlier this week.

‘Where most people’s concerns were being addressed was illegal immigration,’ they said. ‘We have the constant drip drip drip of small groups but cumulatively large groups of illegal immigrants arriving on our shores.

‘We need to do something about it.’

Ms Patel looks to be trying to take the heat out of the row with France, unleashing an excoriating attack last night on the broader EU’s open borders policy.

The Home Secretary railed against Europe’s lack of border checks – the so-called Schengen zone – which has allowed thousands of migrants to sweep across the continent.

She also announced that she had secured agreement with Mr Macron‘s government – once legal changes have been approved – to use drones and tracking technology against people smugglers.

Priti Patel unleashed an attack on the EU’s open borders last night, pointing the finger at Brussels for the Channel crisis

France takes the rotating presidency of the EU in six weeks’ time, with the bloc working out how to react to claims Belarus is engineering major migrant flows to destabilise the area.

In an interview with French newspaper la Voix du Nord, Mr Macron – who is facing a stern challenge from right-wing politicians at looming elections – called for a tougher response.

‘We must take several actions: prevent the establishment of lasting camps, act to dismantle the smuggling networks and strengthen work with the countries of origin to prevent these flows,’ he said. ‘I will carry reforms under the French presidency of the EU.’

Mr Macron also hit out over tensions between London and Paris.

‘We have the British, who oscillate between partnership and provocation. We need to further strengthen collaboration,’ he said.

‘If those who want to join Britain have family there, it must be part of family reunification. If they are smuggled, we have to break this system.’

Downing Street said the UK was working ‘extremely closely’ with the French to prevent illegal migrants crossing the Channel.

A No 10 spokesman said there was a ‘global migration crisis’ which required a co-ordinated response from countries across Europe.

‘Our work to date has prevented more than 20,000 migrant attempts so far this year but we have been clear that we need to do more, both ourselves and the French, which is why we continue to work extremely closely with them,’ the spokesman said.

‘We are facing a global migration crisis choreographed by organised crime groups who put people on these boats to make these incredibly dangerous crossings.

‘This is an urgent issue for the whole of Europe requiring incredibly close working together with our neighbours – France, Belgium and the Netherlands – as well as our friends across the continent. It is a shared problem, so we need shared solutions.’

Keir Starmer accused Mr Patel of failing to deliver on promises to stem the flow of illegal migrants crossing the Channel.

The Labour leader linked the increase in numbers making the dangerous journey to Government cuts in Britain’s foreign aid budget.

‘We have not had strong enough agreements with France on this and we haven’t done the work upstream,’ he told the BBC Radio 4 Today programme.

‘One of the reasons many Tory MPs were unhappy with the Government for cutting its foreign aid budget is because they knew that budget is used in part to deal with some of the problems that are driving the movement of people.

‘You have got to do the work upstream otherwise you will never solve this problem.’

Speaking on a trip to the US, Ms Patel said offshore processing centres remained ‘on the table’ but refused to discuss specific negotiations. There have been suggestions that migrants could be sent and held abroad while their cases are looked at.

‘We keep everything on the table… and this is why the new Nationality and Borders Bill is just so important,’ she said..

‘I’m the only Home Secretary over a 20-year period that has taken on the challenge of reforming what is fundamentally a broken system of asylum and illegal migration.’ She admitted for the first time that Britain was facing a ‘mass migration crisis’.

In a marked a change of tone after months of friction with the French government, she said the flow of small boats must be treated as a ‘Europe-wide problem’. She said France was ‘overwhelmed’ by asylum seekers heading for the UK.

And she blamed Brussels – which governs EU border policy – for failing to act. ‘Let’s not forget the real problem on illegal migration flows is [that] the EU has no border protections whatsoever,’ she said.

‘On stopping crossings, France can’t do it on their own. Other countries have to do much more in terms of border protection.’

Seven out of ten migrants who attempt to cross the Channel have entered France through Belgium according to French officials, Miss Patel said.

Video footage taken this Tuesday – the same day that a staggering 1,000 migrants made it to the UK – showed groups of migrants, including young children, clapped in celebration as they managed to restart their boat’s engine on a Calais beach

She added: ‘The EU’s Schengen zone is free movement and open borders. They do not have border controls and border checks. There is no united position across EU member states in terms of how to tackle this issue. It’s an EU competency issue.’

Deploying highly-charged language, the Home Secretary went on: ‘There is a mass migration crisis. I’ve said this from day one – from the minute I walked into the Home Office. For everyone who complains about this – and no-one is more angry and frustrated about this than myself, alongside the British taxpayers – there isn’t a silver bullet.

‘There’s no point saying, ‘Well, you could just push boats back’. It will not stop it. There are all sorts of issues with criminal gangs, smugglers, etc.’ Ms Patel said of the French: ‘I think it’s fair to say they are overwhelmed. That is a fact.

‘We are constantly pressing France on this and we’re asking them to be honest with us about where the gaps are because they can’t be everywhere. We have a very, very professional working relationship, but no one country can fix this on their own.’

Again and again, how her promises came to nothing

Priti Patel vows to halve migrant crossings – then a tenth of the current level – by the end of the month and make them an ‘infrequent phenomenon’ by the spring of 2020.

‘I am absolutely committed to doing everything in my power to stop these dangerous Channel crossings which are putting vulnerable lives at risk.’

WHAT HAPPENED? Migrant numbers hit a record 1,185 in a day last week.

‘The number of illegal small boat crossings is appalling and unacceptably high.’

WHAT HAPPENED? Within hours, Ministry of Defence sources suggested the proposals were unworkable.

‘Access to the UK’s asylum system should be based on need, not the ability to pay people smugglers.’

WHAT HAPPENED? The tactics have yet to be used amid opposition from France and even the UK Border Force over legal concerns.

She agrees to give France another £54million to tackle the crisis.

‘The public are rightly angry that small boats are arriving on our shores, facilitated by appalling criminal gangs who profit from human misery and put lives at risk.’

WHAT HAPPENED? In October France accused the UK of withholding the money amid a row over whether Paris was doing enough to stop the boats. The first instalment of UK cash was later paid – but numbers coming over the Channel continue to rocket.

Miss Patel and French counterpart, Gerald Darmanin, vow they will deliver on their pledge to prevent ‘100 per cent’ of illegal crossings.

JOINT STATEMENT: ‘More must be done to stop the dangerous crossings… and make this deadly route unviable.’

WHAT HAPPENED? Days later the French embassy in London said 100 per cent ‘should not be presented as an agreed figure’.

The Home Secretary launches an attack on the EU’s open borders policy, blaming Brussels for the crisis.

‘The real problem on illegal migration flows is the EU has no border protections whatsoever – open borders. On stopping crossings, France can’t do it on their own. They simply can’t.’

WHAT HAPPENED? Free movement for people between member states in the so-called Schengen area is a fundamental EU principle and there is no prospect of it being changed.