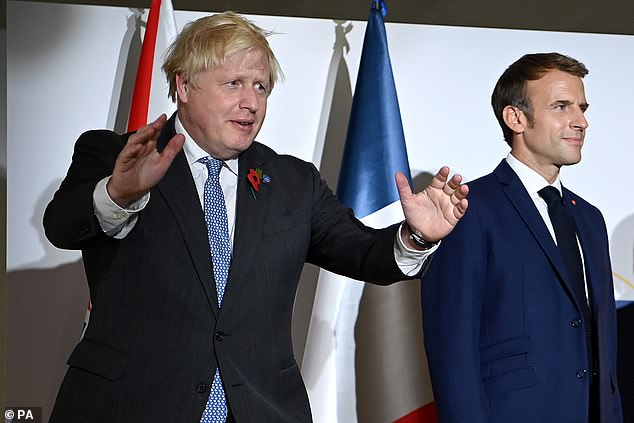 We are promised an ‘impartiality revolution’ at the BBC. The Corporation’s chairman, Richard Sharp, pledges that it now has a chance to become what it was originally intended to be – ‘fair, authoritative and impartial’.

This will be splendid news, if true. But we will wait before rejoicing. A real rebooting of the BBC, back to its Charter, would indeed mean a revolution, as so many of its programmes and staff have demonstrated active and severe bias for so long.

Their most basic problem is that, just as a goldfish has no idea that it is a goldfish, or that there is any other world beyond the watery limits of its bowl, much of the BBC has no clue that its opinions and stances are in fact highly partial.

Why, for instance, did the BBC yesterday morning give great prominence to the predictably haughty remarks by French President Emmanuel Macron about his fishing dispute with Britain, but bury the far more striking news that France‘s Prime Minister, Jean Castex, had blatantly admitted that his country seeks to punish the UK for Brexit?

The BBC had seen Mr Castex’s leaked letter to EU Commission President Ursula von der Leyen, in which he demanded that Brussels made clear that leaving the EU was ‘more damaging than remaining in it’. This is astonishing behaviour by the French premier. But the BBC, pro-EU to the marrow, mentioned it as a mere ‘meanwhile’.

MAIL ON SUNDAY COMMENT: As our neighbours engage in petty squabbles, and confront the demons of their often-tragic pasts, we have no need to join in. All the more reason for Boris Johnson and his Cabinet to emphasise the agility, flexibility and freedom which they rightly say our independence has given us

Deep down, has the BBC yet accepted that Brexit is even a fact? Many of its senior staff will plainly never concede that it was justified, but this really should not influence coverage of the inevitable post-departure complications, such as the cross-Channel fishing quarrel and the problems with the Northern Ireland protocol.

In both of these, Britain has every interest in reaching a friendly compromise. It is the EU which seems to want trouble.

Brussels currently has severe problems with controlling its eastern fringe, especially Poland, and might well see a point in making an exit look difficult and painful.

And that desire comes most especially from the EU’s most militant member, France.

Paris seeks to prove that our decision to leave was a mistake, by making it as needlessly painful as possible.

And President Macron, who faces re-election next year, would benefit from a noisy nationalist brawl with the ancient Anglo-Saxon enemy.

MAIL ON SUNDAY COMMENT: Deep down, has the BBC yet accepted that Brexit is even a fact?

Mr Macron faces a disturbing challenge from the Right-wing populist maverick Eric Zemmour, a defender of the generally despised wartime Vichy regime who is a far more dangerous opponent than Marine Le Pen ever was. He could do with a chance to look tough.

As our neighbours engage in petty squabbles, and confront the demons of their often-tragic pasts, we have no need to join in. All the more reason for Boris Johnson and his Cabinet to emphasise the agility, flexibility and freedom which they rightly say our independence has given us.

It really would be good to see the Government making more use of our escape from Brussels’ interference, our ability to make our own laws, set our own taxes and encourage our own economy. There has, for instance, been very little mention of free ports lately.

Our successful return to the world of fully sovereign nations will be the best answer to the resentful pettiness of some of our entangled neighbours.

Perhaps, as before, they will learn from Britain’s example.

Our fully realised freedom may even, one day, remind the BBC that the first word in its name is ‘British’.