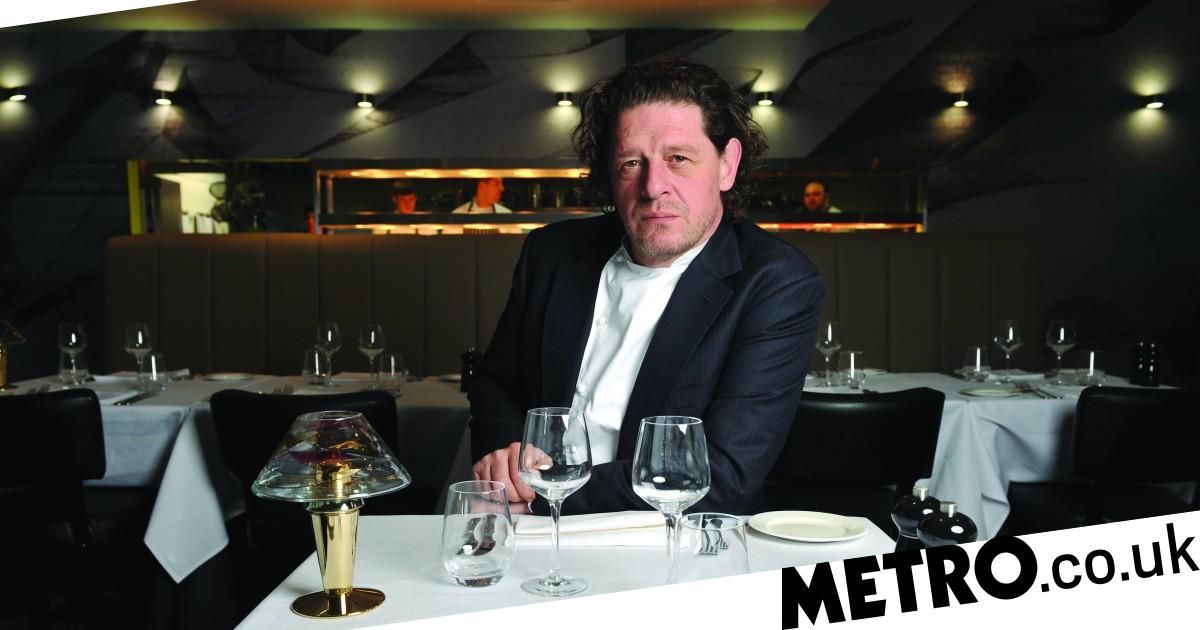 Marco Pierre White has worked his way up the culinary ladder to become one of the most prominent names in the industry, but it is only now that he is at his happiest professionally.

The 59-year-old is set to open the doors to his latest restaurant, Mr White, in Leicester Square on November 3, whipping up menu favourites with a very well-stocked bar to boot.

Chatting with Metro.co.uk ahead of the grand opening, the chef spoke candidly on all aspects of his career, as well as his cookery colleagues and his guilty pleasure of playing Snake on his old-school Nokia phone.

‘Now you’ve got some questions for me, I’m told,’ he begins in a playfully menacing manner before settling into a conversation full of life advice and quotes from his beloved mum, Maria-Rosa.

Marco left school at 16 with no qualifications and took on an apprenticeship at the Hotel St George in Harrogate days later, working hard in various kitchens in a bid to carve out a name for himself, collecting Michelin stars along the way.

Despite the huge success and the awards to his name, it is now that he is most satisfied with his career, as he gets to work alongside his children – Letitia, Luciano, Mirabelle and Marco Pierre White Junior – as they enter the industry.

‘Mirabelle, my youngest daughter she’s working at Rudloe, she’s there learning and doing our management course,’ he says, beaming with pride. ‘My son Luciano is opening his chain of Italian restaurants, My daughter Letitia is a restaurant manager. I suppose this is the happiest time in my career, is working with my children.

‘You can’t stop them [making mistakes]. My son Luciano came to see me about his new menu, and asked me what my thoughts are, and what my opinions are. So tomorrow I’m spending the morning in the kitchen with him to make a calamari Bolognese for gnocchi, which is delicious.

‘I like sharing and imparting my knowledge with my children. [Before this interview] I was just finishing off a meeting, but before that, I had a meeting with my daughter all about development and refinement. As I say, it’s my happiest time of my career working with my children.’

It’s abundantly clear that family is ingrained in every step that Marco takes, down to the naming of his new restaurant, Mr White.

‘It’s after my mother Maria-Rosa White. Mr White but it’s coded so that it’s Maria-Rosa,’ he explains.

‘It is maybe the Italian within me but family is the most important. As I always say in life, self-control is true power, a clear conscience is true strength and good friends and family is true wealth. That’s what I’ve learned in my life.’

Focus turns to another chef, one who has had the food industry in a spin in recent weeks, Salt Bae. The Turkish foodie and internet sensation opened up his Nusr-Et in Knightsbridge recently, with pictures of receipts making the rounds on social media – showing gold-covered burgers and steaks on offer for eye-watering prices.

Marco refuses to be drawn into giving his opinion, claiming that he has no idea who the viral foodie is as he lives in a secluded property in the middle of the woods. ‘I’ve never heard [of him], I don’t even know who he is,’ he insists. ‘What’s his name? I’ve never heard of him, but remember I live in a field, I don’t watch TV, and I don’t read newspapers.

‘I’ve got an old-fashioned Nokia. My battery lasts longer than anybody’s and if I drop my phone my screen doesn’t shatter. It’s as simple as that.’

Talk instantly turned into whether it has Snake available on it and, thank goodness, it does, and it’s actually become the chef’s guilty pleasure, just two decades later than everyone else.

‘Secretly, every so often I play it. I discovered it about a month ago and every so often when I’m sitting somewhere, I just have a little game of Snake. My record is 11, that’s appalling isn’t it? But the screen is so hard, and the buttons are so old fashioned, it’s very hard.

‘Why am I even telling you this? It’s too embarrassing! I’m 60 years old and I’m playing Snake, it’s ridiculous! But it’s a great game…’

With Mr White nestled in between the other Leicester Square eateries, Marco will be making a bold return to London’s West End, serving up a menu filled with pizzas, steaks and salads. He is putting tourists first, with comforting food that everyone can enjoy without breaking the bank, and a meal you don’t have to spend hours waiting around for.

When you think of what chefs like to eat themselves, pizza probably isn’t the first thing that comes to your mind, but he is genuinely enthusiastic about how much he loves the dish and enjoys how much it tends to bring people together more than any other meal.

One thing that you won’t find on his menu, however, is any pizza with pineapple as a topping, and he vows to not serve the controversial foodstuff on one of his dishes any time soon. So pineapple on pizza fiends beware, you may have to sneak your own in or go without…

Some questions may have been raised about Marco’s decision to head back to an already-cluttered area to set up shop, with all the other food options in the vicinity, but he insists he doesn’t ‘think about’ the competition around him, and never has.

‘I think having lots of restaurants together attracts people, doesn’t it? So it’s good for everybody,’ he reasons. ‘It’s been a torrid time. All we’re trying to do is put some stability back into our business and rebuild them, that’s the reality. It has been a very, very, very tough time and it’s just rebuilding.

‘It is creating employment, and creating a bit of interest and that can only be good. When you own a business, what’s important is that you create opportunities for people. And secondly, you have an opportunity to share your knowledge. We’ve got a lot of young people coming on board, and it’s good.’

‘I left school at 16 without any qualifications and just a want to work hard,’ he adds of his own beginnings. ‘I left school on the Friday and on the Monday I started working as an apprentice chef at the Hotel St George in Harrogate. My greatest achievement in life wasn’t Michelin stars. My greatest achievement, in my opinion, was being invited to address the Oxford Union.