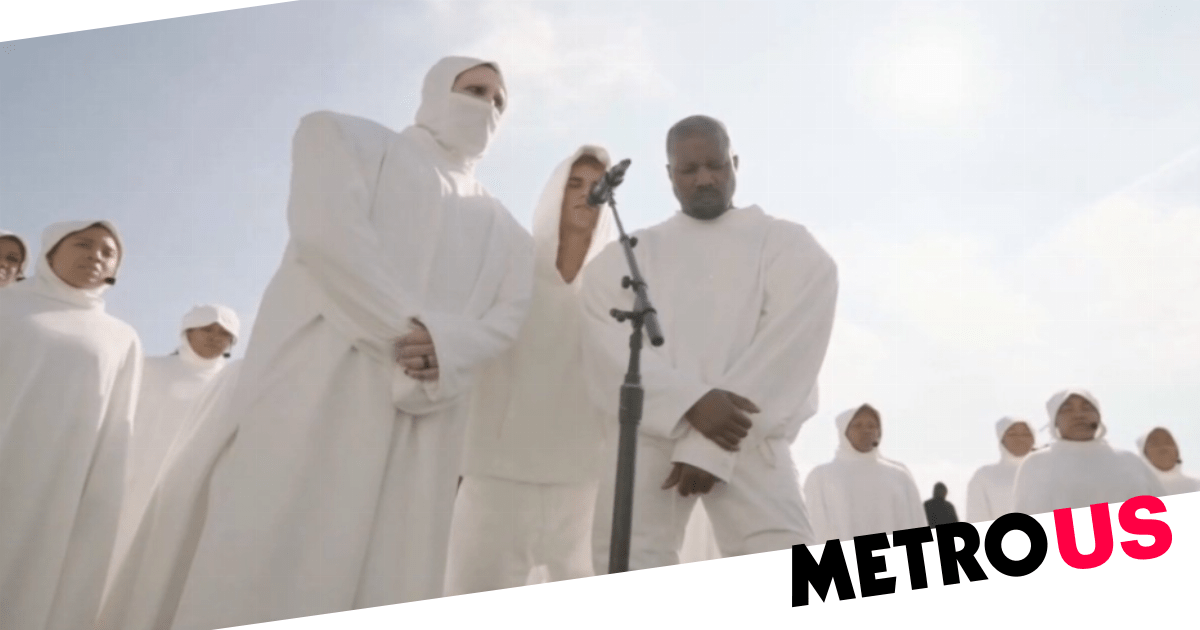 Kanye has started a new round of his religious services and on Halloween, he invited the rocker, who currently faces allegations of sexual misconduct and abuse from multiple women.

Manson, real name Brian Warner, was seen standing at the front and centre of the choir, with everyone in attendance dressed entirely in white, and some having their heads covered with hoods or masks.

The 52-year-old had half of his face covered, and was seen touching foreheads with Kanye, 44, as they bowed with their eyes closed.

Musician Kenny Bear tweeted during the stream: ‘justin bieber just said “we cast out any demonic presence on this day in the name of jesus” and marilyn manson nodded dfkjsfnksdjdnfksdnkfdsjnfdk.

Bieber, 27, laid low at the service, but did speak to pray at one point.

At the service, which featured a children’s choir, the Donda songs No Child Left Behind, Hurricane, Moon and Come to Life were performed, while Roddy Ricch performed Pure Souls.

This isn’t the first time Manson has joined West at an event, after the rapper brought him out during one of his Donda listening parties – alongside DaBaby, who at the time was embroiled in a scandal over homophobic comments he made about HIV and AIDS at Rolling Loud Festival.

Manson appears on West’s song Jail, Pt 2, although the star claimed that his record company tried to block the song from the album Donda.

Kanye wrote: ‘UNIVERSAL PUT MY ALBUM OUT WITHOUT MY APPROVAL AND THEY BLOCKED JAIL 2 FROM BEING ON THE ALBUM.’

The track was added to the streamed record hours after release.

Manson is facing lawsuits from four women who allege sexual and emotional abuse, with Game of Thrones actress Esmé Bianco alleging that the star used ‘drugs, force, and threats of force to coerce sexual acts from Ms. Bianco on multiple occasions’ and violated sex trafficking laws.

The Dope Show singer has denied all of the allegations, and in a motion to dismiss Bianco’s lawsuit, Manson’s team called her and the other women ‘co-conspirators’ who are ‘desperately trying to conflate the imagery and artistry of Warner’s “shock rock” stage persona, “Marilyn Manson”, with fabricated accounts of abuse’.


MORE : Alec Baldwin poses with wife Hilaria and children for Halloween photoshoot after speaking out over Halyna Hutchins shooting