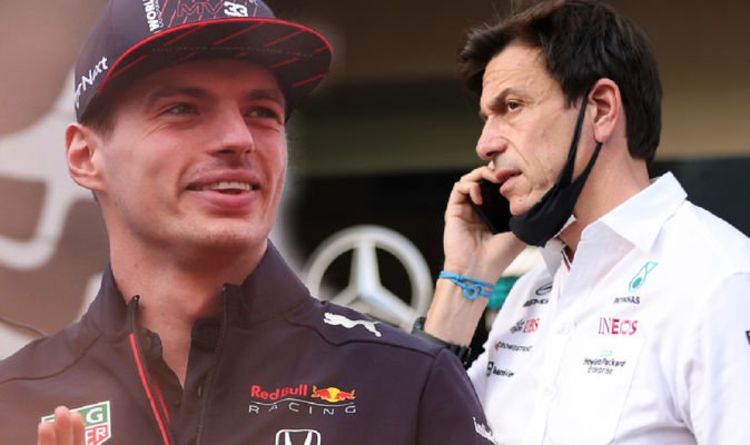 Christian Horner and Toto Wolff endured an intense head-to-head battle in 2021 Formula One season as Red Bull and Mercedes fought to become constructors’ champions. It was a battle in which Wolff came out on top after Mercedes’ comfortable victory.

Yet despite this, the decision by the FIA to allow unlap cars through and give Max Verstappen a chance to win the Drivers’ Championship ahead of Lewis Hamilton in Abu Dhabi left Wolff infuriated.

Verstappen won the championship by just eight points after the pair went into the final race neck-and-neck on points.

And the Mercedes chief has spoken of how the Dutchman offered him a ‘thank you’ for the strong participation the two teams showed in the battle for the driver’s and constructors’ titles.

The Austrian, 49, was left livid after a controversial decision by FIA director Michael Masi left Hamilton in the lurch with just one lap to go in Abu Dhabi.

Verstappen consequently got round Hamilton on the final lap of the season to take his first ever Drivers’ Championship crown.

Relations between both sets of bosses had reached boiling point, with the multiple clashes between Verstappen and Hamilton adding fuel to the fire.

But in the aftermath of the fracas, Wolff acknowledged the successes of the Red Bull team after a long and strenuous season, texting both Horner and Verstappen.

And Wolff has told of the reply Verstappen sent back to the Mercedes boss.

“Thank you very much. It was a tough battle, I am looking forward to next year,” Verstappen replied to Wolff according to BILD.

“It is normal when you’re young. Now he’s only getting better, and this year he hasn’t made a lot of mistakes.

“Maybe the one in qualifying in Jeddah, but he was attacking so much, it can happen. He was ready to reach the top.

“With a world title in your pocket, you drive and think differently. As soon as you win one, the pressure is less. He will know even better when to attack and when to take less risks, and in the end he will be a better driver.”