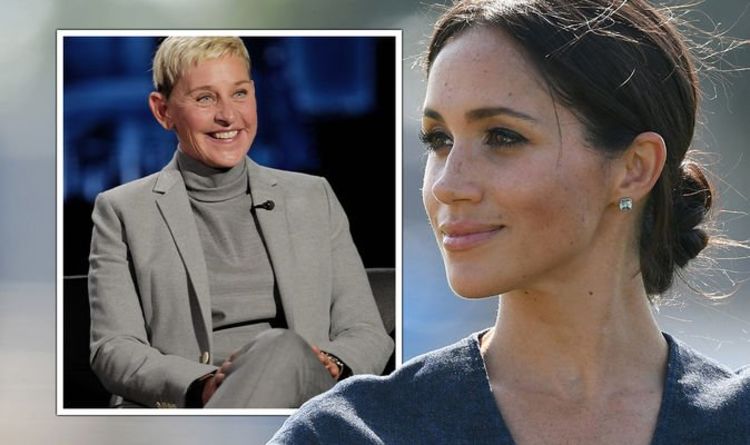 Meghan Markle, 40, and Ellen DeGeneres, 63, have sat down for their interview set to be aired on American channel CBS at 8.00pm. But the pair are said to have been neighbours and friends for some time.

In fact, the story as to how the former-Suits star and TV host forged their relationship involves a shared love for California’s canines.

The Mirror reports the Duchess of Sussex and Ellen DeGeneres first met while visiting the same Los Angeles dog shelter back in 2012.

Meghan, who by 2012 had appeared as Rachel Zane in Suits, returned from her visit to the dog shelter with her very own four-legged friend.

Bogart, a Labrador-German Shepherd cross, went home with the Duchess.

However, while the Duchess has since added a Beagle called Guy to the family, she is said to have claimed Ellen played a significant role in bringing Bogart home.

JUST IN: Meghan to cause ‘no harm’ in new interview– but Duchess warned over Royal Family ‘attacks’

According to reports, when Ms DeGeneres and her wife Portia de Rossi, 48, saw Ms Markle cuddling the pooch, she asked if the dog belonged to the Duchess.

When Ms Markle said the dog was not hers, Ellen replied: “You have to take that dog.”

Even when DeGeneres, who has hosted her own talk show since 2003, left the dog shelter, she supposedly tapped the window to tell the Duchess to take the dog home.

In Omid Scobie and Carolyn Durand’s book on the Sussexes, ‘Finding Freedom’, it is claimed: “Although Meghan didn’t grow up with pets, Bogs, as she called him, became the object of her devotion and in heavy rotation on her Instagram feed.

“But she credits Ellen DeGeneres as the reason she adopted the Lab mix.”

“She said they actually have a lot in common and that Ellen has been a huge support, especially since moving to Canada”.

Despite her role in the Duchess taking home Bogart, Meghan is believed to have left the Labrador-German Shepherd cross in Canada.

A source told the Sun: “Meghan adored that dog but the decision not to take him back was based on Bogart’s relationship with Harry.

“Bogart never took to Harry when they spent time together in Canada.

“He didn’t like Harry. Meghan was very vocal about the fact it wouldn’t be fair to take him back full-time, given Bogart’s feelings for her husband.

“Of course, her staff in the UK who knew about her decision found her statement quite strange, but they accepted it at face value because Meghan knows her dogs.”