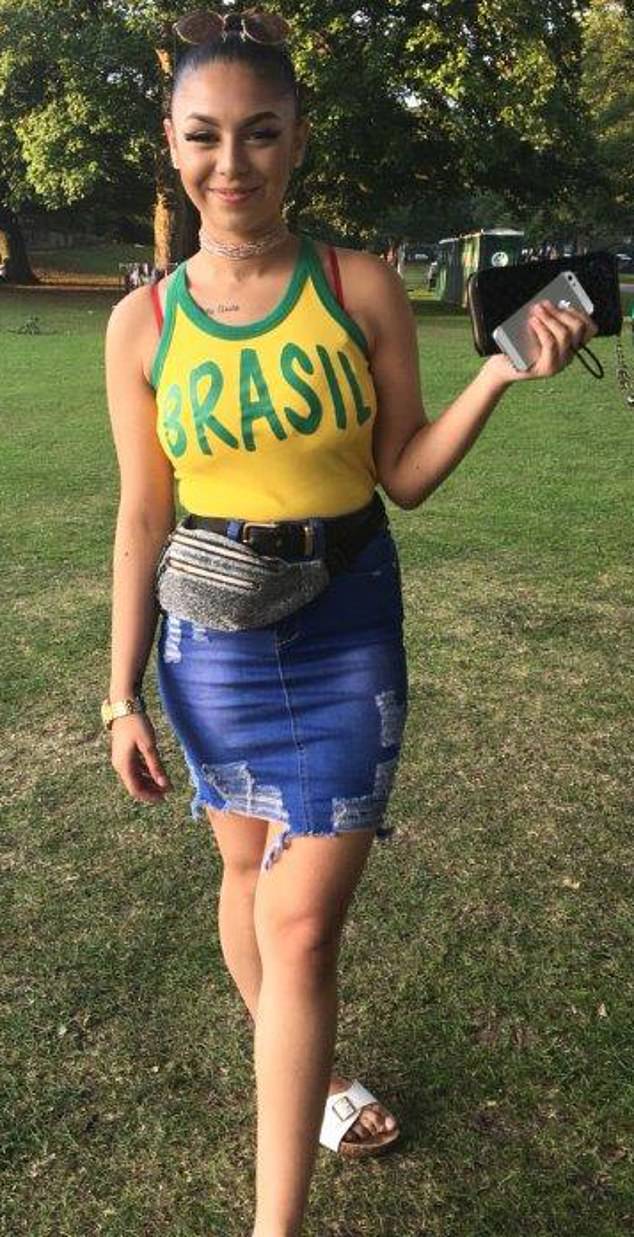 Metropolitan Police missed five opportunities to save the life of a vulnerable teenage girl who ‘fell on a knife’ she kept in her handbag when she was pushed by her abusive and controlling boyfriend.

Katrina Makunova, 17, died outside a block of flats in Camberwell, south London, following a row with her then partner on July 12, 2018.

Met Officers failed to follow-up on reports of domestic abuse, despite being called to her home on multiple occasions in the months prior to her death, and treated further allegations as an ‘isolated incident’ when she attended a police station in person, a report has said.

Oluwaseyi Dada, 21, pleaded guilty to manslaughter and was sentenced to a two-year jail term for the killing in January 2019.

The case has risen to the fore again, though, following the publication of a prevention of future deaths report on Friday criticising the Met’s handling of the case.

Senior Coroner Andrew Harris says the force failed to identify or investigate Katrina’s ‘past and present association with gang members’ and, as such, it was never identified as a risk to her safety.

Mr Harris also highlighted five incidents in which Katrina had contact with police in the months prior to her death.

Katrina Makunova, 17, was killed after falling on a 17-centimetre knife she kept in her handbag after becoming increasingly wary of her partner

A jury returned a ‘long narrative’ verdict at the conclusion of an inquest at London Inner South Coroner’s Court on September 8.

The court heard Katrina ‘suffered a pattern of abuse and coercion and controlling behaviour’ that included ‘violence and threats against her family members and friends’.

Boyfriend Dada would also carry and display a knife in front of the teenager, leaving her feeling ‘isolated, scared and depressed’.

As a result, she began carrying a knife herself.

Following a row outside a block of flats in Brisbane Street, Camberwell, the 5ft 4ins teenager was pushed by the 6ft 3ins Dada and fell on the 17-centimetre blade inside her handbag.

Police and paramedics were called to the scene to find Dada performing CPR on the victim.

Due to her past trauma, experiences and age, Katrina was vulnerable and at an ‘increased risk of contextual harm’.

Her vulnerability also made engaging with local authorities more difficult.

Over the five-month period between February and July 2018, the coroner identified five incidents where police had contact with Katrina and Dada, but her vulnerability was not accounted for when the Met made risk assessments.

Dada stole Katrina’s phone, allowing him to control her communications, but this was not recognised.

Police were called to Katrina’s work address, where she described and police identified ‘clear examples of coercion and controlling behaviour’.

However, when Dada was released from custody, police did not take any mitigating safeguarding actions to protect the teenager.

Police were called to Katrina’s home, but Met officers failed to assess and manage her risk.

There were also failures to investigate allegations of domestic abuse and a failure to provide effective safeguarding as no Merlin report was sent.

A Merlin report is a database operated by the Met that stores information on children who have become known to the police for any reason – ranging from being a victim of bullying to being present while a property is searched. As Katrina was 17, she was still a juvenile.

Police were again called to Katrina’s home, but there was a failure to acknowledge there was a report of criminal allegations of harassment and to record the incident as a crime.

There were also failures to properly assess and manage and record the risk because no ‘booklet 124 D’ (a domestic violence form) was completed. Misleading information was also entered on the crime report and there was another failure to safeguard Katrina as, again, no Merlin report was sent.

The incident was not considered urgent because it was viewed as an ‘isolated’ incident despite previous allegations.

The Met admitted another failure to investigate the allegation of domestic abuse and a failure to provide adequate safeguarding because no Merlin report was sent for a third time.

Makunova, 17, was found with a single knife wound outside a block of flats in Camberwell, south London

As part of the report, Mr Harris identified areas of concern that need addressing in order for future deaths to potentially be prevented.

He said: ‘Whilst significant steps have been taken to recognize contextual abuse by all the organizations since the death, there remains a concern. Police officers knew of the perpetrator’s wearing of a knife.

‘Possession of a knife was not recognized in risk assessments and not always recorded by police, nor social services. It was also unclear from police evidence when gang affiliation should be explored and when it would be recognized as a risk.

‘Those around Katrina, knew of her past and present association with gang members; yet this too never seems to have been investigated and identified by police as a risk factor.

‘Evidence was heard from her brother and another witness that her fear of what harm he might do led her not to make a full disclosure of his controlling behaviour to the police.’

He added that workload pressures within the Met’s Child Safety Units were ‘considerable’, but he was concerned by data presented at court which showed the force may not be able to establish a workforce of ‘sufficient capacity’.

The coroner has recommended that university academics provide expert-based evidence about how the carrying of knives should considered in risk assessments in relation to those at risk of domestic abuse.

He has also asked the Met and the Mayor’s Office to consider whether staffing of Child Support Units needs to be increased to ‘enable proper risk assessment and safeguarding’.