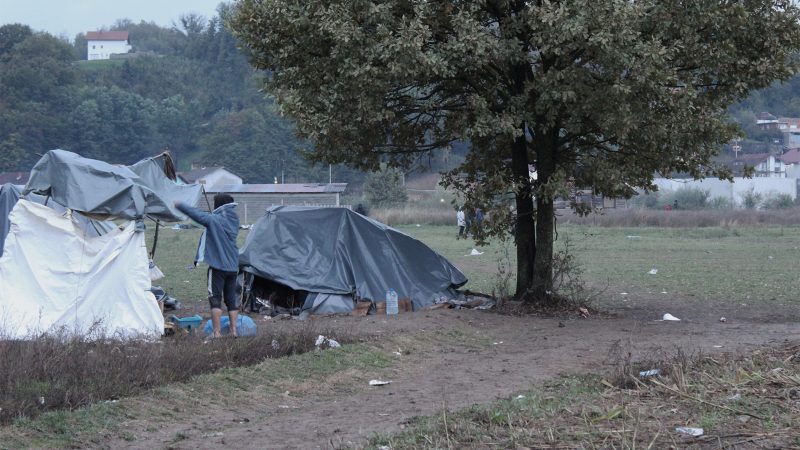 In Bosnia, close to the border with EU member Croatia, fears of cold, isolation, and evictions persist for asylum seekers soon to face sub-zero temperatures outside camps, as the opening of a new housing facility has been delayed several times.

“At the moment as you see our situation, there’s no electricity, there’s nothing,” a teenage girl from Balochistan, Pakistan said as she and her seven-member family huddled in an abandoned building near the Croatian border.

She was one of the hundreds of asylum seekers still staying outside camps mid-October as winter approached.

The new facility in Lipa, half an hour drive from the northwestern city of Bihać  — one of the hotspots on the migration route to Europe that goes through Bosnia — is set to open on Monday (1 November), with a capacity to accommodate 1,000 single men, 200 children and 300 people with families.

It is built in place of the old, temporary eponymous camp that burned down (or was torched, according to some officials) last January, leaving thousands freezing in the Bosnian winter.

The authorities started building the facility in April, promising to finish within three months.

However, as is often the case with Bosnia’s highly dysfunctional governance, delays ensued, so much so that the International Organisation for Migration (IOM) had to take over finding an electricity contractor to ensure the new facility can open before harsh Bosnian winter sets in.

It is only the latest example of the Bosnian’s authorities long track record of insufficient resources and capacities to accommodate the flow of EU-bound migrants, mostly from the Middle East and Africa, through its territory.

Meanwhile, around 700 people have been staying across the dirt road, in what looks like military barracks.

“They call it a camp. It’s not a camp, it’s a survival mission”, Belmin, the new camp manager from the Bosnian Service for Foreigners’ Affairs told EURACTIV.

Rights groups worry that the new camp’s location, some 20 kilometres from the border, could disincentivise those attempting to cross to stay in the camp.

“I think the site has many disadvantages,” Laura Lungarotti, the IOM’s Western Balkans coordinator and chief of mission in Bosnia, told EURACTIV, pointing to the absence of urban centres and public services nearby.

The isolated location, however, was a hard-won compromise between the different levels of government, with all political actors attempting to keep the facilities as far away from local population as possible.

“So we are making it the most humane and the most liveable possible,” Lungarotti said, pointing to the IOM’s plans to provide transport to the city centre, hospitals and schools for children.

The problems of having a camp near a city have become clear some 55 kilometres north from Bihać, in Velika Kladuša, where the initially temporary camp of Miral has slowly turned into a permanent feature of the border-town.

After initial solidarity with the incoming migrants, Kladuša residents grew tired and began protesting against the camp last year.

“I wasn’t feeling very comfortable” at that time, said Alma, a school teacher who has been distributing food and clothing to those in need since 2018. She has since been forced by the authorities to found her own charity organisation, Rahma, to keep her activities legal.

“If I had to give something I would call people to come to some places where there’s no one, where nobody can see me and then take the stuff out of my car and give it and just go,” she said.

In August 2020, the local coordination committee declared restrictions on the movement of migrants, setting up roadblocks and intercepting buses in order to inspect passengers. Helping refugees outside camps was also prohibited.

Though the pressure has somewhat subsided since, local authorities confirmed to EURACTIV they plan to continue clearing the squats.

“I think still a lot of people are worried. And even if they do help, they do it kind of in silence because they don’t want to have problems,” Alma said.

Nevertheless, she said the situation has improved with the arrival of migrant families, rather than only single men, pushing many locals to become more accepting of migrant presence.

Most institutional actors argue that there are enough capacities across camps in Bosnia to accommodate those currently outside of the camps. However, not everyone agrees.

Jelena Sesar, a researcher at Amnesty International, told EURACTIV she was concerned “that even with the new camp in Lipa, the number of people who are sleeping rough in Una-Sana Canton will exceed the available capacity.”

According to September’s IOM report, there are currently about 1,100 people living in squats.

Sesar cautioned that “having recently visited dozens of such locations, each with hundreds of people, our assessment is that this figure could be significantly higher”.

“While there is capacity in other parts of the country, the distance of such facilities from the border with Croatia and the severe restrictions in place targeting migrants, including the ban on the use of public transport, are making their travel through the country, especially during the winter months, extremely difficult,” she added.

The Danish Refugee Council’s (DRC) country director, Hector Carpintero, who agreed with the IOM’s analysis that there is sufficient space to accommodate everyone, said his main concern is the people who will choose to stay outside the camps.

“I’m more worried about the people that are outside of the reception centres”, Carpintero said, adding his team was working on “our contingency winterisation planning to be able to have enough resources so we can support the population” that is not going to go to the camps.

According to Carpintero, many opt to stay outside the camps because of the mandatory seven-day quarantine imposed on all who enter.

Even though the camps are open and residents are free to leave, activists on the ground have expressed fear that authorities may force people to move into the camps for winter.

In early September, authorities came to a squat in Velika Kladuša in an attempt to clear the tents in a field called the Helicopter Place. Alma said “they would just come and force them, put them on buses, only the people who would hide or run away weren’t taken. Everybody else was forced to go.”

“They just came and destroyed the tents … but maybe two days later, half of the people were back,” she added.

Asked whether the DRC feared such forceful evictions, Carpintero said they had not heard of plans to provide “strong encouragement to people to go back”, but they were in talks with other organisations about what their response would be.