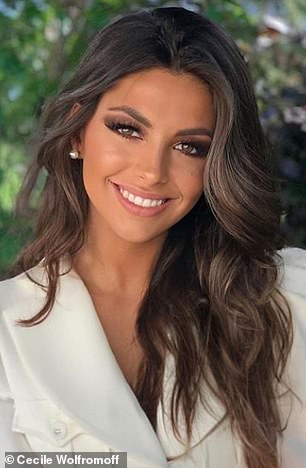 Miss France hopefuls have been warned against overediting their social media photos after there was a public outcry over the difference between their filtered selfies and official photos released by competition organisers.

Fans of the pageant were struck by the heavy editing on social media snaps after ‘natural’ portraits of all 29 finalists were released last week.

Critics said some of the hopefuls’ editing was so dramatic they looked like entirely different people on social media.

Miss France hopefuls have been warned against overediting their social media photos after there was a public outcry over the difference between their filtered selfies and unretouched photos released by competition organisers. Some fans said Miss Alsace, Cecile Wolfromoff, looked different in her Instagram snaps (left) compared to the official portrait (right)

Miss Corse, Emma Renucci, also prompted questions, with one critical Twitter user saying she looked like a different woman. Pictured, Emma on Instagram (left) and in the portrait

‘Wtf, it’s not the same girl,’ one fan wrote of Miss Corsica.

Another tweeted: ‘Miss Alsace is truly a beautiful woman, but I find there is too much of a different between the professional picture and a candid picture of her, a difference I find unhealthy.’

A third added: ‘Misses have to stop with their filters on social media, they are beautiful without them. When you see the official pictures, there is a difference.’

In response Sylvie Tellier, a former Miss France and director of the competition, said the beauty queens had to be careful because they risked disappointing the public at the live final on December 11.

Fans of the pageant were struck by the heavy editing on social media snaps (left) after ‘natural’ portraits of all 29 finalists were released last week. Pictured, Miss Provence, Eva Navarro

Miss Picardie, Hayate El Gharmaoui, in an Instagram photo (left) and the organisation’s portrait (right). Managing expectation is particularly important because viewers’ votes are combined with judges’ scores to decide the winner – and contestants don’t want to miss out

Managing expectation is particularly important because viewers’ votes are combined with judges’ scores to decide the winner.

Seven million people are expected to tune in to watch the competition live.

She told Le Parisien: ‘I tell the girls to be careful, because there are plenty of French people who are not on Instagram and who will vote on December 11 – we must not neglect them and think of everyone.

‘And it’s also important to post makeup-free on social media, as I do from time to time, to show that you’re like everyone else – that’s reassuring for women.’

The reigning Miss France Amandine Petit, also warned the finalists of the dangers.

Youssra Askry, who represents Normandie in the contest shared a picture of herself in a ruby dress and her sash on social media (left). Right, in the official portrait

Lolita Ferrari, Miss Poitou-Charentes, shared a working out selfie with her fans on Instagram, pictured left. Right, striking a pose for the official Miss France photographs

‘She spoke about it in her speech to the contestants in the regional rounds,’ said Ms Tellier. ‘She told them, “Ladies, beware, you are in the Miss France contest, not in the Instagram contest!

‘”So you forget about your apps because you are in reality. By retouching too much, you risk generating disappointing reactions when you get on the Miss France adventure.”‘

The finalists, representing 29 French regions, have jetted out to Réunion, in the Indian Ocean, for rehearsals ahead of the final show.

Questioned on why the Miss France contest released unedited phots, she said the pageant stands for ‘exemplary behaviour’ and they do not want to set unrealistic standards.

An airbrushed snap of Miss Alsace shared to Twitter by a fan of the pageant (left). She said the difference between a professional shot and a candid picture (right) was ‘unhealthy’