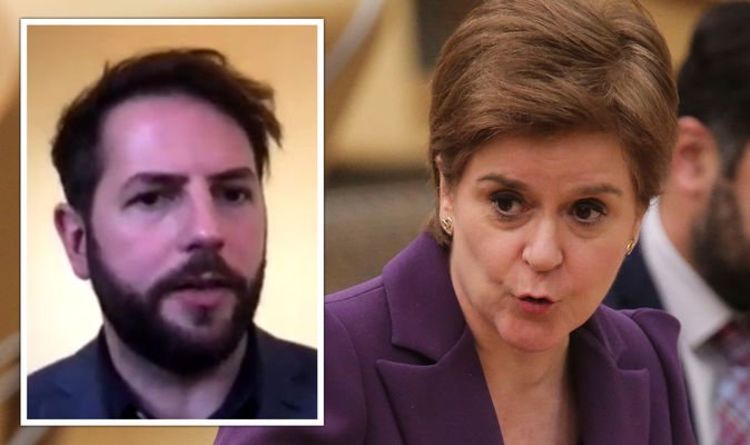 Nicola Sturgeon voiced her strongest opinion so far on the proposed development, saying: “I don’t think that Cambo should get the green light.” But former SNP candidate and spin doctor Fergus Mutch has since warned the First Minister that her comments are not supported by all SNP members. Speaking to ITV’s Representing Border, Mr Mutch said: “It’s disappointing, I’m not sure it makes a lot of sense and it’s also odd what the First Minister was saying just last week at Cop26.

“There she said the two caveats we need to bear in mind when moving to net zero by 2025 are protecting 100,000 jobs in the energy sector here in Scotland and secondly ensuring that we’re not becoming reliant on the interim imported oil and gas which comes with an even heavier carbon footprint.

“I think what she said yesterday about not giving Cambo the green light, not advancing any further exploration development in the North Sea could put both of those things at significant risk.”

Presenter Peter Macmahon asked: “Is your view reflected at least in private by SNP MPs and MSPs in the northeast of Scotland?”

Mr Mutch continued: “There’s plenty of people in the membership and in elected positions in the SNP who will have serious reservations about going too hard and too fast.

“They answer ultimately to their constituents, the people who elected them and when constituents are worried about their future, their livelihoods then certainly they’ll be asking questions about their elected representatives.”

Ms Sturgeon had previously urged the UK Government to reassess the plans, amid growing concern over the impact of fossil fuels on climate change.

But speaking at Holyrood as she updated MSPs on the Cop26 summit in Glasgow, Ms Sturgeon said: “I don’t think we can go on extracting new oil and gas forever, that is why we have moved away from the policy of maximum economic recovery.

“And I don’t think we can go and continue to give the go-ahead to new oil fields. So I don’t think that Cambo should get the green light.”

However she stressed it was the UK Government that has final approval on the development, saying by calling for its reassessment she had “set out a process by which a different decision could be arrived at”.

Labour’s Monica Lennon had raised the issue in Holyrood on Tuesday, telling the First Minister: “There is no rigorous climate change test that Cambo can possibly pass, so the First Minister must do more than ask the UK Government to simply reassess the proposed oil field.”

She urged Ms Sturgeon to “oppose Cambo in the strongest possible terms and provide the political leadership that has been lacking”.

Ms Sturgeon’s comments were welcomed by environmental campaigners, with Mary Church, of Friends of the Earth Scotland, saying: “We welcome the First Minister’s acknowledgement that there is no credible climate test that the Cambo oil field could ever pass.

“This is an important progression of the Scottish Government’s position, which must now translate into clear opposition to all new fossil fuel projects.”

Sam Chetan Welsh, political adviser to Greenpeace UK, said: “We welcome the First Minister showing leadership, listening to the science and saying no to the Cambo oil field, which has no place in the transition to Scotland’s low-carbon future.

“Hopefully this, on top of the many similar comments from scientists, energy experts and leaders around the globe, clarifies the situation for the Prime Minister.”