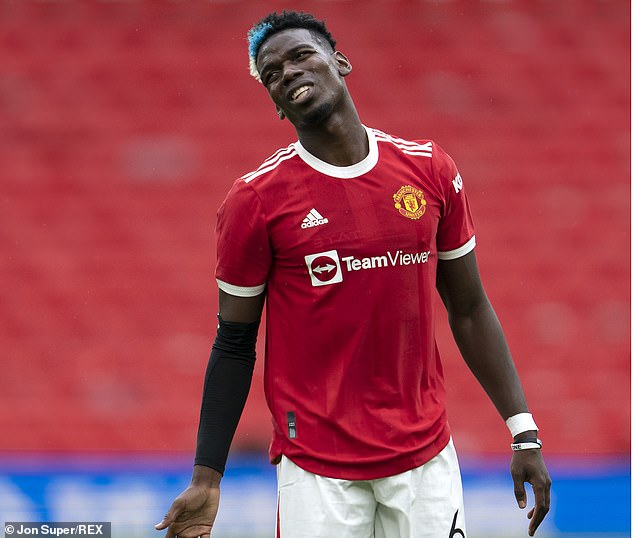 Paul Pogba still ‘another four or five weeks away’ from returning to training, confirms Manchester United boss Ralf Rangnick after unsettled midfielder suffered a setback in his recovery from thigh injury

By David Wood for MailOnline

Manchester United boss Ralf Rangnick fears ‘it will be some time’ before Paul Pogba is back in action after suffering an injury setback.

Pogba returned to Manchester from a warm-weather rehab in Dubai last month following talks with Rangnick who reiterated the prediction of former manager Ole Gunnar Solskjaer that he could play again in early January.

However. the German coach told the club’s official website: ‘As far as I know, I was told a week ago it would be a minimum of at least another four or five weeks before he is fit for training again.

‘I saw him this morning before the training session, he was in the locker room, and I hope he will be back as soon as possible.

‘Right now, he’s not been part of the training group and even if he was back whenever, two, three or four weeks, it will take some time.

‘It’s one thing to be training fit but, on the other hand, he needs to be fit for the match and competition in either the Premier League or the Champions League and this will still take some time.’

Rangnick has already stated that United players will rehab injuries at Carrington in future after he was surprised to arrive at the club and discover that Pogba was in Dubai.

Previously, the Frenchman fell out with Jose Mourinho after recovering from a hamstring injury in Miami.

Under Solskjaer, Pogba travelled to Dubai to recover from an ankle injury and then popped up in Miami where he posted a video of himself playing basketball with NBA star Jimmy Butler – followed by another of him dancing at his brother Florentin’s wedding in France.

The 27-year-old is into the final five months of his contract at United with no sign of him agreeing new terms.

His camp have denied speculation that he has been offered a new £500,000-a-week deal, and it now looks increasingly likely that he will leave Old Trafford for nothing for a second time at the end of the season with Paris Saint-Germain and Real Madrid favourites to sign him.

That would be a disappointing end to Pogba’s time United after he returned to Old Trafford from Juventus in 2016 for a then world record fee of £89million.