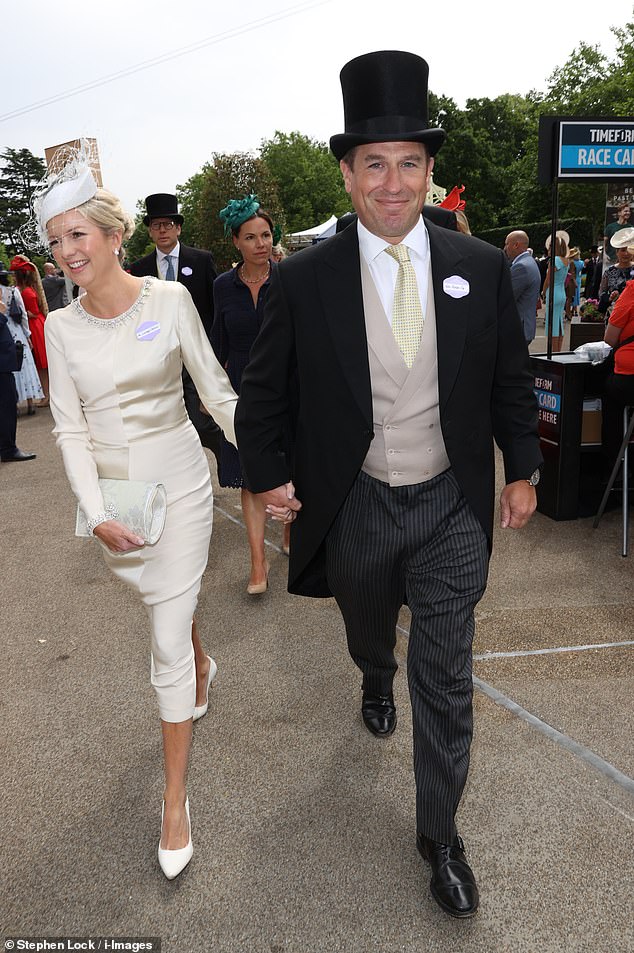 Peter Phillips, 44, and partner Lindsay Wallace have been pictured arriving at the Royal Ascot today after the royals broke with tradition yesterday by bringing Ms Wallace into the royal procession.

Unlike on Friday, when the couple faced soaring temperatures and the Ascot’s iconic dress code had to be relaxed, today the couple will have to dodge the rain – and temperatures which have dipped by 10C.

Today is the final day of racing of the Royal Ascot and the couple are once again expected to appear in the Royal Enclosure this afternoon.

The couple were pictured arriving at Ascot today (June 18) for the final day of racing. Lindsay Wallace is wearing a cream, figure-hugging dress with a matching purse and white shoes

Yesterday the couple were pictured at the races together with Peter Phillips’ arm around his partner. They looked to be enjoying themselves and chatted at length between themselves and with fellow royals

Mr Phillips had a previous marriage which broke down. The divorce was finalised a year ago in June 2021, but his former wife and their two children continue to live in the family home in Gloucestershire

Peter Phillips sent another strong signal that his relationship with his new girlfriend Lindsay Wallace is becoming serious yesterday, as the couple made a high profile outing to Royal Ascot

Yesterday the couple broke royal tradition as Princess Anne’s son brought his girlfriend, a mother of two, into the carriage procession at the parade ground in Berkshire.

The royal procession traditionally only contains the royal family and their married spouses, and bringing a partner prior to marriage is unprecedented.

Ms Wallace, who is an old school friend of Mr Phillips from Gordonstoun school in Scotland, made her public debut at the Epsom Derby during the Platinum Jubilee celebrations.

Ms Wallace, who has also split from her husband, was in the same year as Zara at Gordonstoun, which was also attended by Prince Charles.

She was among the guests at the royal’s 2011 wedding to rugby star Mike Tindall.

The break with tradition signals their relationship is about to get serious – but even young royals Princess Beatrice and Princess Eugenie rode in the procession solo until they were wed.

Rumours of their romance first emerged in March 2021 – which raised questions over whether he had broken lockdown rules.

This was after he was photographed visiting Ms Wallace’s home in St Cyrus, Aberdeenshire – a 460-mile round trip from his Gloucestershire home.

The royal family said the trip to Scotland was made as a marketing consultant for company XF Medical, set up last June to provide rapid Covid and antibody tests for businesses, although sources said he was ‘besotted’ by Ms Wallace.

In January of this year he invited her as his plus-one to his nephew Lucas’s christening.

Prince William and wife Kate Middleton also attended the races and drew many eyes to them – and they seemed friendly and familiar with Ms Wallace, who at times did appear slightly nervous

While Ms Wallace’s outfit might have been suited to the hottest day of the year so far, the royals’ full morning suits complete with top hats must have been a struggle

Lindsay Wallace wore a pale pink dress with statement sleeves and a matching fascinator, and carried a clutch purse

The couple were photographed sharing a cute moment in which Ms Wallace struggled to keep her fascinator on her head, and they had a laugh about it together

Lucas is the Queen’s great-grandson and the daughter of Philip’s sister Zara and Mike Tindall.

The couple were photographed in a car together ahead of the Royal Family gathering.

Peter, the elder of two children of Princess Anne and Mark Phillips, then took the highly significant step of introducing Ms Wallace, the daughter of an oil tycoon, to his grandmother the Queen, who is said to have been ‘delighted’.

Ms Wallace was introduced to Her Majesty at a shooting party at Windsor and the encounter was described as ‘warm’ by a source.

A spokesman for Mr Phillips confirmed at the time that Ms Wallace, 40, had accompanied him to the joint christening of Zara and Mike Tindall’s son, Lucas, and Princess Eugenie and Jack Brooksbank’s son, August, in Windsor yesterday.

It is understood Ms Wallace and Mr Phillips have become close after spending time together following the breakdown of both of their marriages.

Mr Phillips finalised his divorce from wife Autumn in June 2021, 16 months after announcing their separation.

The couple share daughters Savannah, 11, and Isla, 10, and continue to live on Princess Anne’s Gatcombe Park estate, in Gloucestershire.