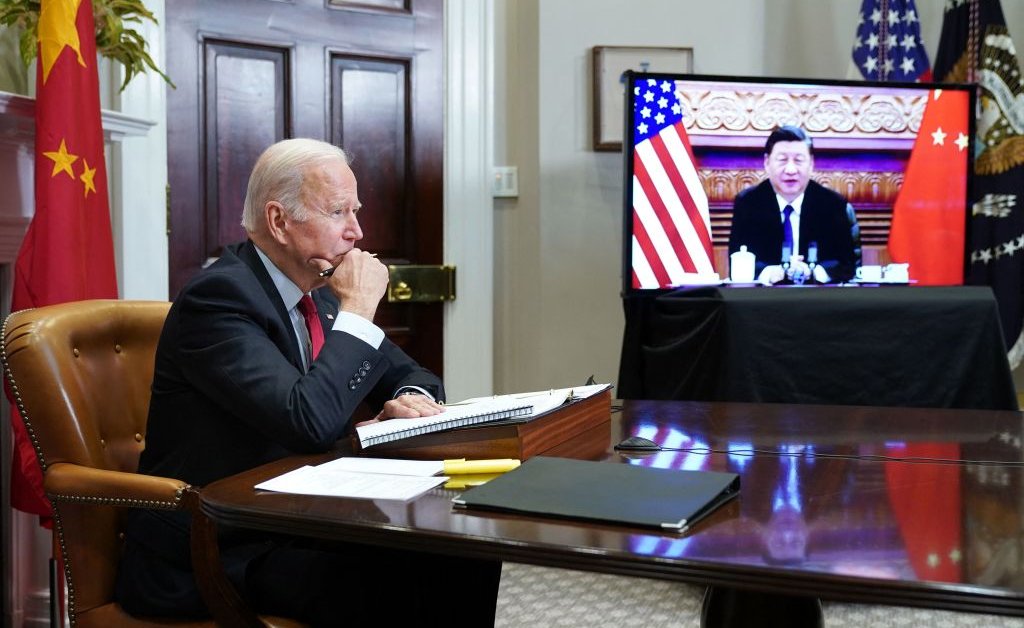 The summit between U.S. President Joe Biden and Chinese president Xi Jinping this week could signal that relations between the world’s two largest economies might soften—despite fundamental differences.

The meeting late Monday came less than a week after Beijing and Washington announced a surprise cooperation on climate change at the COP26 climate summit, saying that they would work together on efforts to curb methane emissions and other climate-related initiatives—which the Biden Administration held up as a small step forward and a sign of possible future cooperation.

Although relations between the countries have spiraled in recent years over issues ranging from trade to Taiwan to technology, the climate agreement and the Xi-Biden summit may indicate that a new era of China-U.S. relations is underway, though experts caution that tensions between the nations are unlikely to be easily solved.
[time-brightcove not-tgx=”true”]

“I think we previously liked to think that this was a Donald Trump problem, but it’s quite clear that it’s not specific to the Trump Administration and it’s structural,” says professor Steve Tsang, director of SOAS China Institute at the University of London.

The tone of the meeting, which took place via video was reportedly cordial. Xi greeted the U.S. president as his “old friend.” Biden and Xi have spent time together over the past decade, including eating at a noodle shop in Beijing in 2011 when both Xi and Biden were vice presidents of their respective nations.

Despite their history, the leaders’ conversation covered a wide range of contentious issues. Biden raised concerns about human rights abuses in Xinjiang, Tibet and Hong Kong, and about China’s “unfair trade and economic policies,” the White House statement said.

He also broached the topic of Taiwan. The U.S. has concerns about signs of China’s increasingly aggressive military posture toward Taiwan—including incursions into Taiwanese airspace by the People’s Liberation Air Force.

Xi, meanwhile, warned against slipping into a “new Cold War” and said that U.S. support for Taiwan, which Beijing considers part of China, was “playing with fire.” “Whoever plays with fire will get burnt,” Beijing’s statement read.

Read More: This Is How Joe Biden Might Start Fixing America’s Relationship With China

“The meeting itself was really about the two leaders discussing ways to manage the competition between the U.S. and China responsibly and ways to establish guardrails,” a senior administration official told reporters in a background briefing after the summit. “We were not expecting a breakthrough. There are none to report.”

Will a change in tone improve relations?

Experts say that despite the lack of clear outcomes, the summit may still help reset relations. Xi hasn’t left China since the start of the pandemic, and U.S. officials say that the virtual summit, which lasted three and a half hours, gave the leaders a chance to engage in a way that they haven’t been able to in the two phone calls they’ve already had this year.

“Rather than substance, the key takeaway was tone,” says Andrew Mertha, the director of the School of Advanced International Studies (SAIS) China Global Research Center at the Johns Hopkins University. The summit signals “a healthier new relationship that represents the closest the two countries have come to standing on an equal footing, at least optically,” he says.

Read More: How U.S. Troops in Taiwan Add Even More Fuel to the China-U.S. Tinderbox

Still, the list of things the superpowers disagree about is long—and future clashes remain possible. But, the recent cooperation between the nations on climate issues may lead to a better way of working together.

“They are trying to find a way that they can work with each other in a more constructive way,” says Tsang of SOAS. “They haven’t really found a way yet, but they are trying.”

—With reporting by Brian Bennett in Washington.