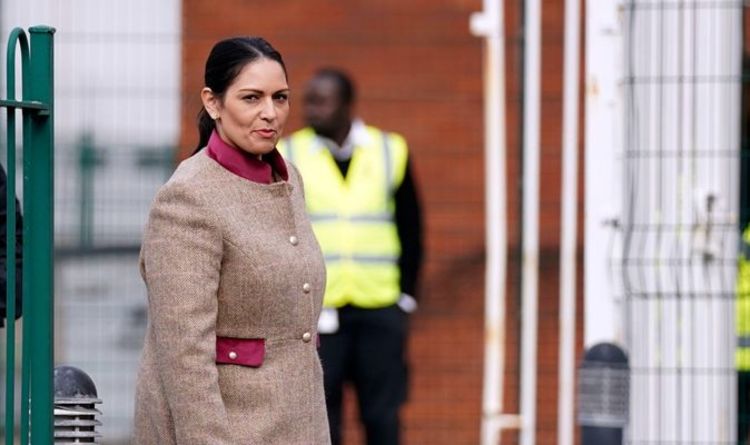 Migrant crossings have seen a huge rise this year, with 25,000 dinghies already reaching the UK this year. This is triple the number of dinghies that reached the UK last year.

But one Cabinet minister said her job may be in serious doubt – should these crossings continue.

The minister told the Sun: “Boris has a soft spot for her and she is broadly unsackable since the reshuffle, but she’s running out of road.”

This comes as some Home Office staff called out Ms Patel over her handling of the situation.

A member of staff for the Home Office said: “She hates us and we all hate her.”

Another added: “What’s become abundantly clear is that she is out for herself and only interested in how this plays out publicly.

“If we actually worked collaboratively, then we could get things done, but instead we just have cloud cuckoo land public statements from the Home Secretary and we all look and think, ‘Well, that won’t work’.”

The Home Sec had threatened to “push back” migrants who were attempting to enter the UK.

However, this was deemed “unworkable” by one official.

Ms Patel and Home Office Permanent Secretary Matthew Rycroft released a statement in an attempt to calm the ongoing situation down.

They said: “While personal and anonymous attacks are regrettable and a very unfortunate part of public life…

“We will not let them distract from building a department able to rise to the challenges of today and tomorrow.

“The Home Office is responsible for delivering some of this Government’s biggest priorities – recruiting 20,000 police officers and cutting crime, keeping our country safe from terrorism, and implementing the New Plan for Immigration.

“We are both hugely grateful for the hard work of the thousands of public servants who work to do this every single day.

“While personal and anonymous attacks are regrettable and a very unfortunate part of public life, as joint leaders of the Home Office we will not let them distract from building a department able to rise to the challenges of today and tomorrow.”

A loyalist of Ms Patel told the Sun: “The postbags are overflowing.

“She is battling for her job now.”