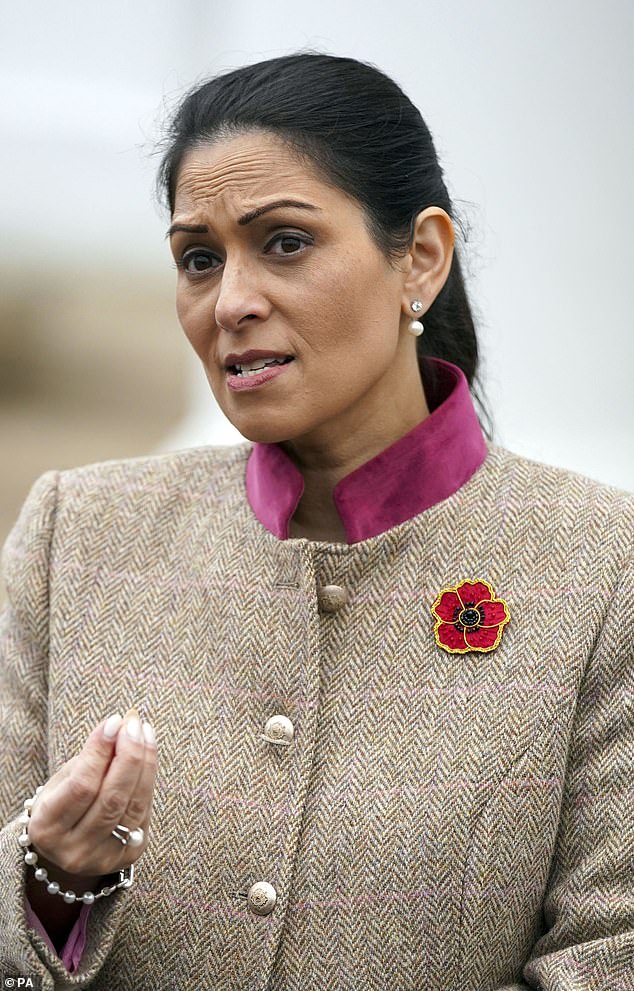 Priti Patel is set to have crisis meetings with France this week in a bid to speed up plans to intercept every migrant that crosses the Channel.

The Home Secretary’s plan to turn back migrant boats is not being implemented by border force and Ms Patel is set to meet the French interior minister, Gerald Darmanin, this week to begin crisis talks and find a ‘shared solution’.

Last week, a record 1,185 migrants crossed the Channel yesterday and three who fell from kayaks are feared dead.

On Thursday, the French intercepted 99 migrants out of the 1,284 who tried to cross the channel and reach the UK, according to The Telegraph.

Clandestine channel threat commander Dan O’Mahoney said: ‘These journeys are illegal, dangerous, unnecessary and facilitated by violent criminal gangs profiting from misery, and we have seen again this week that they can lead to tragic consequences.

‘We are working with the French to stop boats leaving their beaches and crack down on the criminals driving these crossings.

‘People should claim asylum in the first safe country they reach. The Government’s New Plan for Immigration will fix the system, making it firm on those who abuse it and fair on those in genuine need.’

Priti Patel announced her plan to turn back migrants in a Tory conference last month after she took legal advice, according to the Times.

Border Force has rejected requests to use Ms Patel’s new strategy, citing objections such as weather and size of boats being intercepted.

Officials said they do not think the policy will be implemented because of conditions which have to be met and the agency’s lack of support for it.

The Border Force officer said: ‘There is fairly universal agreement that this is not likely to ever happen.

‘The captains of the cutters have control of the process and in practice, if they’re not willing to use it, it will never happen.’

The official said the force will ‘not be easily pushed about’ by the Home Secretary but it is the captain of each vessel’s decision.

An ally of Ms Patel and Conservative MP said: ‘People should be in no doubt about Priti’s determination to stop the boat crossings, whatever unionised officials say.’

Lucy Moreton, of the Immigration Services Union, which represents frontline Border Force staff, said the tactics were unlikely ever to be used because of the risk of killing people.

Ms Moreton said safety at sea is paramount and pushback cannot be used on a vulnerable boat.  Small boats are more likely to be vulnerable.

She said the force cannot turn back a vessel in trouble unless the French are there to receive it and they won’t cooperate with the policy because they do not think it is ‘legal.’

Pictured: Migrants arrive into Dover after crossing the channel in the dangerous journey

Turnback powers are ready to be used after the prime minister gave the green light at the end of September.

Border Force has been seen off Dover practicing the tactics, involving three jet skis surrounding a migrant boat and directing it back to France.

According to guidance, the tactic can only be used in the Channel sections which are 1.8 miles wide and a commander can only agree to the procedure if it is confirmed that a French navy or rescue boat can escort the boat back.

Other safety rules must also be met including weather, sea conditions, number of migrants and size of the boat.

In Australia and Greece, when similar tactics were used, migrants threatened to jump overboard in a bid to force authorities to rescue them.

Ms Patel was frustrated at Matthew Rycroft who is her permanent secretary.

He told MPs in September that Border Force would turn back a small number of migrant boats and the plan would be rarely used because of rules that need to be followed.

The Prime Minister, 57, defended the Government’s policy on migrants and instead hit out at the French president, 43, arguing that France need to shut their borders to prevent migrants from sailing across the English Channel to reach the UK

Speaking at a vaccination centre in Old Bexley and Sidcup, London, Mr Johnson hit out at Emmanuel Macron’s government (pictured) for not policing their beaches, arguing it is difficult for UK Border Force to turn migrants back safely at sea

This comes as the Prime Minister, 57, hit out at Emmanuel Macron’s Government for not policing their beaches to stop migrants from sailing to Britain on small boats, arguing it is difficult for UK Border Force to turn migrants back safely in the English Channel as he defended Priti Patel’s border policies.

Speaking at a vaccination centre in Old Bexley and Sidcup, south east London, Mr Johnson insisted that the UK was dealing with the migrant crisis in the ‘most effective’ way, as he called on France to shut their borders to ‘close off’ the flow of migrants arriving in the country with the purpose of sailing across the Channel to reach the UK.

He told Sky News: ‘They are coming from France. In the end, if the French authorities will not or cannot control those departures it is very difficult for us to turn them back at sea. We want to do that in a safe and in a humane way but it’s very difficult.

‘You have to work with the French and you have to try to persuade them to police the beaches that are sending these people over to us.’