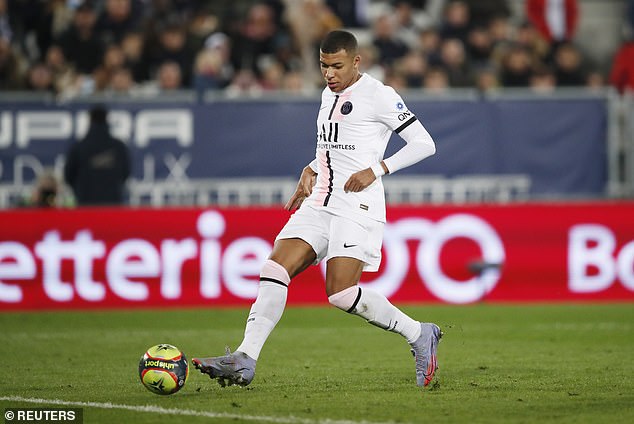 ‘If we give €200m they wouldn’t sell’: Real Madrid president Florentino Perez aims a thinly-veiled jibe at Qatar-backed PSG over ‘clubs owned by countries’ after failing to sign Kylian Mbappe last summer

By Jack Bezants for MailOnline

Madrid have long been admirers of Mbappe and it is believed the France striker’s dream move would be to the Bernabeu.

But last summer, Madrid were rebuffed by Qatar-backed PSG with a £154m offer to buy Mbappe, despite the striker being in the final year of his contract and able to leave for nothing in 2022.

Speaking to Mundo Deportivo, Perez said: ‘We try to bring in good players and the best. But you have to have the possibility of playing.

‘Now if we give €200million they wouldn’t sell. When the contract finishes it is better, but right now there are crazy state clubs and they won’t sell you the players.

‘I fight because management is what prevails, it’s not money that they give you from the outside.

‘The moment will arrive in which the 30 top clubs in Europe are owned by countries.

‘That is not the start of the European community. I have come here to fight and to fight from the start.’

The Madrid president, Florentino Perez, has now  hit out at clubs ‘owned by countries’

Perez’s words come as Newcastle were recently the subject of a Saudi Arabia-backed takeover, with a consortium replacing Mike Ashley as owner of the Magpies.

Manchester City owner Sheikh Mansour is also a member of the Royal family in the United Arab Emirates.

Mbappe, meanwhile, is still to sign new terms at PSG and is still on course to leave for nothing at the end of the year. He has scored 12 goals in 19 games for club and country so far in 2021-22.