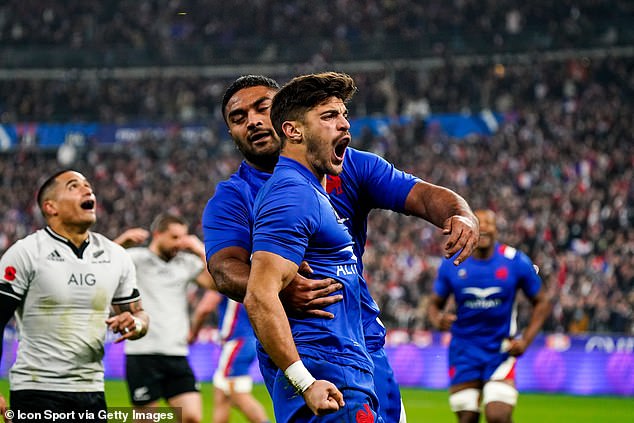 By Daniel Matthews For The Daily Mail


As they had all night, France and New Zealand met head-on around halfway. Neither took a backward step. Both sides continued their laps of honour.

Eventually, Antoine Dupont hoisted the Dave Gallaher Trophy. It was an ominous image for the rest of rugby. The next time these sides meet here a much greater prize awaits, after all.

On this evidence, France and New Zealand could bring the house down on the opening and closing nights of the 2023 World Cup.

Depleted though these All Blacks were after three months away, this win — France’s biggest over New Zealand — was a huge statement.

And yet how different the landscape looked heading into the final quarter, when New Zealand — who had trailed 24-6 at half-time — were stalking their prey.

‘We were scared,’ Dupont admitted. ‘But we kept cool heads.’

No one more than Romain Ntamack. Never more vividly than on 62 minutes, when the fly-half gathered the ball behind his own line. As the All Blacks swarmed, with his back to play, Ntamack evaded Brad Weber, brushed off Richie Mo’unga and glided past Jordie Barrett — all before crossing the try line. Within a minute the tide had turned.

Ntamack was only 18 months old when, in 2000, France last beat New Zealand on home soil. This was the 22-year-old’s crowning night. On his star’s try, France head coach Fabien Galthie added: ‘Incredible moment.’