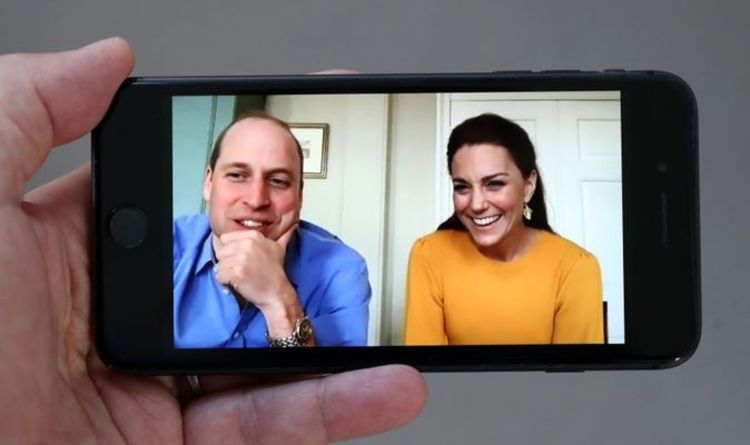 A royal expert has told GB News that the Covid-19 pandemic has “really benefitted” the branding of the Royal Family, as they continued to conduct engagements via video link. Kinsey Schofield said that they had been able to “communicate back and forth” with the general public and have boosted their public image during a period of crisis. Despite cancelling her upcoming engagements due to illness, the Queen has continued with a few virtual engagements, presenting the Queen’s Gold Medal for Poetry on Thurday through a video call.

In a snippet released by Buckingham Palace, Her Majesty can be seen greeting the 2020 winner David Constantine, saying: “I’m very glad to have the chance to see you, if only mechanically, this morning.”

The acclaimed poet visited the Palace alongside the chair of the judging committee, the Poet Laureate, Simon Armitage.

After being presented with the medal for his 11 books of poetry, the 95-year-old monarch joked: “I don’t know what you do with it, do you put it in a cupboard?”

Speaking of the Queen’s appearance, Schofield told GB News host Mark Dolan: “She is so chipper, so witty, she’s on her game and I absolutely adore her so I look forward to seeing her again soon but I am perfectly okay with just seeing her over Zoom.

“I almost feel like the pandemic was really beneficial for the Royal Family’s brand, because all of a sudden, instead of just shaking hands with strangers on the street which they were no longer able to do, we were able to see them communicating with all of these charity workers, with all these NHS workers.

“We were actually able to see them engage with people for the first time to communicate back and forth, we got to hear their voices more often, we got to see Prince William’s quick wit.

“I think that while it’s been a horrible time for the world, as far as the Royal Family’s brand is concerned, it almost elevated them globally

“We’ve had more access to them than we’ve ever had before and specifically with the Queen, we’ve heard her speak more in the last year and a half than we’ve heard in so long.

She will instead address the assembled delegates via a recorded video message and will continue to undertake “light desk-based duties” from her home in Windsor Castle.

The announcement came after it emerged that she had spent an evening in hospital undergoing “preliminary investigations” and would take a period of two weeks to rest from royal duties.

Other members of the Royal Family have received praise over the course of the pandemic for their efforts to life community spirits via virtual audiences, in particular the Duke and Duchess of Cambridge.

The couple have frequently spoken to NHS healthcare workers and emergency service staff to thank them for their efforts throughout the pandemic.

Both Prince William and Kate are due to attend the COP26 summit alongside Prince Charles and Camilla between November 1-5.