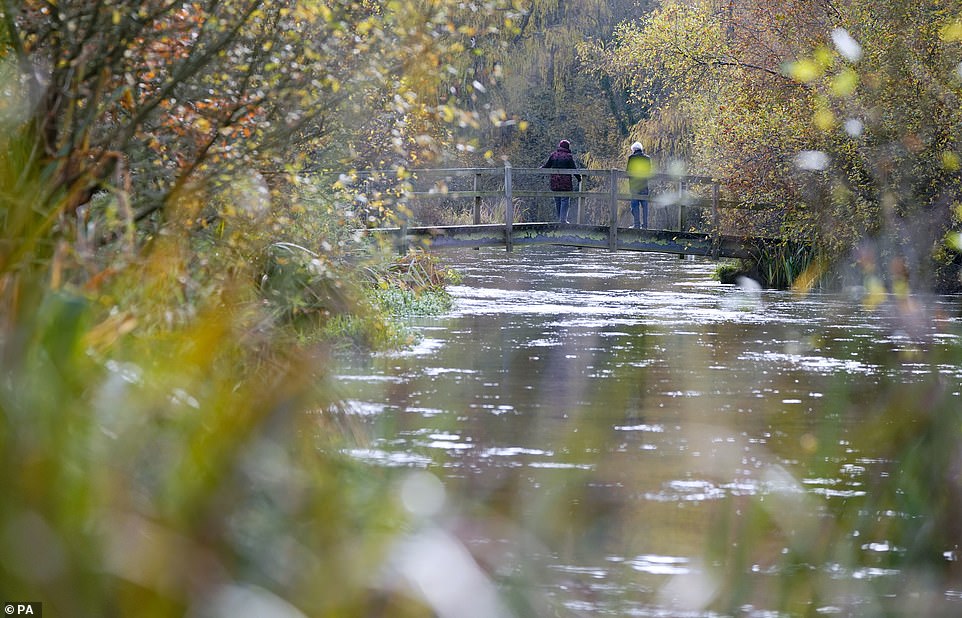 By Darren Boyle for MailOnline

Britain could be plunged into a brief cold snap towards the end of next week with cold winds heading south from Iceland.

Snow flurries at the end of next week could hit Scotland, especially in higher areas, while much of the rest of the country could face overnight sharp frosts.

For the past several days, much of the country has had dry and mild weather, with little wind and rain and only mild overnight frost.

The calm conditions have been cited as one of the reasons why so many migrants are successfully crossing the English Channel from northern France.

The Icelandic air is expected to arrive in the final ten days of November and will continue into early December.

However, warmer than normal temperatures are expected to continue until Monday at the latest.

There were pleasant conditions on the River Itchen near to Ovington in Hampshire with people out enjoying the warmer than normal conditions.

According to a spokesperson for the Met Office: ‘Temperatures across the UK have been milder than average of late, notably in parts of Eastern Scotland where the Foehn effect has helped temperatures reach the mid-teens today.

‘Through the weekend a colder mass of air will bring closer-to-average temperatures to the UK. There is a chance that some showers in Scotland over high ground could fall as snow, however no significant accumulations are expected, and any settled snow will not persist as milder conditions move in on Monday

‘By the middle of the week there is an increasing chance that some colder air could once again move in from the north. There is uncertainty over how cold this air could be and how much progress it will make across the UK

‘As such there is also low confidence on the likelihood of any snow that could fall in the UK by the end of next week. The conditions required for snow to fall are quite specific and this level of detail will only be clear closer to the time. If there is snow, it would not be unusual as we move into late November and close to the start of winter.

An Icelandic cold snap could hit the UK next week, depending on what happens with weather fronts out in the Atlantic and over continental Europe

From tomorrow, early patches of mist will be slow to lift with cloudy conditions in Scotland. Much of the rest of the country will have sunny spels.

On Saturday and Sunday rain will spread across Northern Ireland and Scotland and move towards northern England.

However, those in the South of England will have sunny spells.