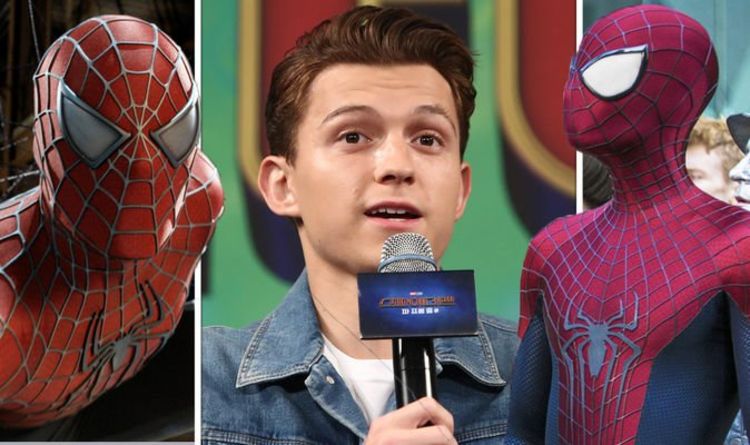 Reports that Maguire and Garfield will be joining Holland on Spider-Man No Way Home have been rife for over a year at this point. A number of “leaks” and screenshots have supposedly shown off the former actors back in their Spidey gear on Twitter, but Marvel have remained resoundingly quiet about it. Despite this, it has been confirmed that some former actors from the movies will be returning – but mostly villains from the movies.

Alfred Molina features in the film’s trailer, reprising his role of Doctor Octopus, while the likes of Willem Dafoe’s Green Goblin and Jamie Foxx’s Electro have also been teased.

Holland was recently asked about working on set with a collection of these classic Marvel actors, with Garfield and Maguire mentioned along the way.

He replied: “Everyone puts their trousers on in the same way in the morning. It was interesting having those guys come in because they have a certain ownership over Spider-Man in their own way, and… [pause] …I’m talking about Alfred [Molina] and Jamie [Foxx] and those guys.”

The 25-year-old clarified: “To see Alfred come in, and have to adapt and change to the way that the films are made, but also change director, and also [the fact that] I’m now Spider-Man. It was really interesting to see these actors adapt and change what they were doing to fit the modern era.” (Via Total Film)

READ MORE: Shang-Chi Disney Plus: How to watch Shang-Chi for free online

Holland was reportedly then quizzed on whether he had slipped up, and he was actually talking about Garfield and Maguire.

But, he doubled down in confirming they are “not” a part of this upcoming movie.

He said: “People don’t believe me when I say that [Maguire and Garfield] are not coming back. But people are going to have to believe me at some point.

“It means a lot to me. The first time you see Doc and the rest of the characters that come back, it’s so exciting.”

Holland clarified: “It’ll be a continuation of the Spider-Man movies that we’ve been making.

“I honestly have no idea what this film is about and I’m eight weeks into shooting it.”

Other members of the team have been quite open about their apparently secret return, however.

Molina explained back in April that returning to play Doc Ock was “wonderful”.

Molina continued: “It was very interesting going back after 17 years to play the same role, given that in the intervening years, I now have two chins, a wattle, crow’s feet and a slightly a slightly dodgy lower back.”

He also confirmed that, although his character died in the 2004 film Spider-Man 2, his character would be saved just before the fatal attack.

It is not yet certain how Foxx’s character Electro will be returning.