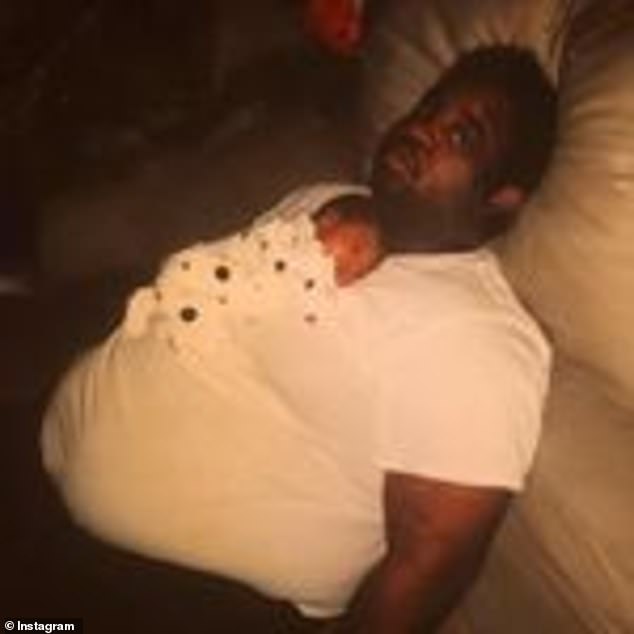 A pricey Park Avenue triplex townhouse appears to be being used as a den of iniquity during the pandemic by squatters who were initially subletting the pricey 3,000 sq foot property for $16,000 a month.

According to a newly-filed lawsuit, the Murray Hill townhouse which is said to be worth close to $7 million is now allegedly a venue for people to play poker, hold parties late into the night and has even been a place for prostitution in what has essentially become ‘members only’ club.

Kenyatti Adams, pictured, is allegedly squatting in the Park Avenue townhouse which has been the scene of ‘pot smoking, loud parties and prostitution’ since the pandemic began

But in court papers seen by the New York Post, Jurman does not appear to be just any other tenant.

Soon after moving into the property, complaints about noise and anti-social behavior began piling up with calls to the city’s 311 hotline with the NYPD receiving 14 complaints about loud music in the four months since November 2020 to March 2021.

Nearby residents living along Park Avenue complained about the music, pot smoking and the sheer numbers of people coming and going from the building.

One of the complainants noted how people would wait in line to enter the townhouse before emerging onto a balcony to drink and smoke.

‘It appears that they are using an apartment as a club. Loud music, marijuana smell, not following social distancing rules. Not wearing mask. Two men that act as bouncers standing outside. This happens on the weekend,’ one complaint to the Department of Buildings in December 2020 notes.

Another bizarre complaint arose from another resident of the building, Shan Haider, that depicted video of a straggler from Jurman’s apartment breaking and entering into his own, alongside a woman, with his genitals exposed.

‘I complained so many times,’ he told The Post nothing that partying would regularly continue until 4am.

The apartment is owned by Mitch Spaiser who had bought the pad in 2012 as an investment. But the calls about incessant partying appeared to begin once Jurman moved in.

‘I was getting calls from people in the neighborhood like threatening my life,’ he said to the Post.

Upon trying to evict Jurman, he demanded tens of thousands of dollars to pack his bags and leave.

A lawsuit has now been brought against both designer Taub and Jurman in the hope of bringing the unhappy episode to an end.

Another of those named in the lawsuit is Kenyatti Adams who moved in with Jurman in the spring of last year.

‘Adams is using the premises to host illegal poker games, to host sex trafficking and prostitution activities, and to hold illegal after hours parties. He mainly enters on the weekend and leaves during the weekdays,’ court papers allege.

Spaiser filed a lawsuit after his tenant, Brazilian interior designer, Patricia Taub, sublet the pad to Ashley Jurman who has since allowed Kenyatti Adams to live there, who is refusing to leave

Adams is now said to be the sole occupant of the residence after Jurman moved out.

He has claimed COVID-19 hardship since moving in and has said he is unable to pay rent due to the pandemic.

He has acknowledged that he plays poker but has denied ever doing anything illegal. at the property.

One social media posting included in the papers sees an invite to a poker game that required a $1,000 minimum to play with an event featuring drinks and ‘talent.’

‘This is a case of the most egregious abuse of New York’s tenant protection laws being wrongfully used by bad actors to manipulate and take advantage of the system at the expense of the owners,’ said Spaiser’s lawyer, Victor Feraru.

Adam’s lawyer, Lowell Sidney, noted that his client paid rent in the past and was neither a squatter or hosting any kind of activities that might be illegal.

Meanwhile, Jurman’s lawyer, Michael Mueller, also ‘denies having any part in any alleged drug use or prostitution.’