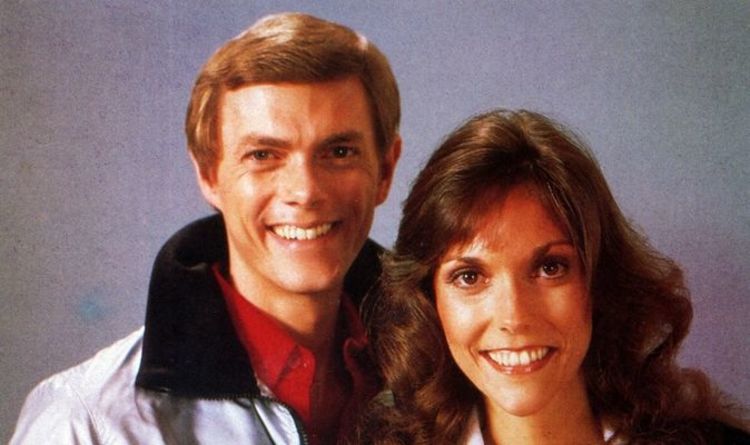 “Melody, that’s the universal language,” Richard Carpenter tells me. “And Karen’s magical voice. It was timeless. She would have been a hit in any decade. She could make someone happy or melancholy depending on how she sang.”

His inspired arrangements mattered too, of course. The duo’s incredible run started with (I Want To Be) Close To You in 1970 and didn’t dry up for eleven years. “But we weren’t teen idols,” says Richard. “Visually I wasn’t David Cassidy – I wasn’t that cute. Our demographic was from 5 or 6-year-olds to mothers, fathers, grandmothers, grandfathers…that’s why we sold so many albums.”

Their audiences rarely screamed and were generally well-behaved. “In New Orleans once when I was singing a girl came bounding up on stage after me. Our road manager grabbed her to steer her off and I said, ‘What are you doing? Leave her up here!’”

He laughs and adds, “It happened once with Karen too, but it was all very respectable.”

They sold out the Royal Albert Hall in August, 1971. “We were astonished,” says Richard, 75. “We’d had a hit and a half. Karen and I had been paying attention to the US Billboard charts, we didn’t know we’d become a hit in Britain and Japan. So much, so fast…”

And it didn’t end until his sister Karen’s tragic death from an anorexia-related heart attack in February 1983 – less than a month away from her 33rd birthday.

New official book, Carpenters: The Musical Legacy, packs in stories about their songs and Karen’s detailed itineraries of their tours, but doesn’t shy away from the darker side.

“I didn’t want it to be yet another authorised biography where a famous person never admits to a single mistake,” says Richard. “We weren’t perfect. You’ve got to deal with Karen’s anorexia by late 1973, and you have to deal with my use of Quaaludes.”

He formed his first combo, the “light-jazz”-orientated Richard Carpenter Trio in 1966, after the family moved from New Haven, Connecticut, to Downey, Los Angeles. He played piano, Karen, then 16, drummed, and Wes Jacobs played upright bass and tuba. They followed this with rock group Spectrum, before being a brother-sister duo in ’68.

“I wasn’t a born jazz pianist and I knew damn well I’d never be a first-class concert pianist but I had other skills,” he says. “But Karen’s voice had real potential and by the time she was 18 she pretty much had the sound.”

Picking hits was Richard’s forte. “I could spot winners,” he says. “It was a talent I was born with. You can’t learn it. I was into the Top 40 by the time I was three.”

The Carpenters with a Honda motorcycle as a prop during their UK tour. (Image: Keystone/Hulton Archive/Getty Images)

Growing up he realised he could hear a song and tell if it’d chart. “If it didn’t, it surprised me until I realised it was because the arrangement wasn’t right.”

They were signed by Herb Alpert’s A&M label. “Most A&R men were looking for the next Dylan or Beatles but when Herb signed the Carpenters we had a sound of our own. And A&M’s philosophy was to let the act do what they want.”

Their first single was a cover of the Beatles’ Ticket To Ride. Richard slowed it down, changed the melody and altered chords. Released in 1969, it wasn’t a hit, but it wasn’t a flop either. It was on and off the US charts for six months, finally peaking at 54.

Early fans included Burt Bacharach. “We played a benefit party after the premiere of Hello Dolly, and we opened with an arrangement of Burt’s I’ll Never Fall In Love Again. We didn’t know he was there! The next thing we know, he’s standing right in front of us below the stage!”

Herb Albert gave Richard the sheet music for Close To You – written by Bacharach and Hal David – and Carpenter came up with the free-flowing arrangement.

“It was in the can waiting to be released, but Ticket To Ride wouldn’t quit. It set the way for us because DJs heard it and were aware of us. So Close To You was an overnight success when it was released on May 15, 1970.”

Six weeks later, it was Number One. “Karen was 20 and I was 23. Our whole world changed. I felt vindicated because our demo had been turned down by so many record labels.”

A&M needed a follow-up single. Richard had heard We’ve Only Just Begun as a jingle on a TV advert. “It had no bridge, but I recognised the singer’s voice and got a demo of the full song. It needed a new arrangement, but we knew it was a hit.”

It became the wedding song of a generation.

Speaking from his home in Westlake Village, California, Richard adds, “That first year was great, but we were growing so fast, the venues weren’t as big as they should have been by the time we got there. We didn’t have a road manager – we packed our own instruments, and set off in rental cars.

“We’d get to Idaho and Montana and it was freezing. We knew freezing from New Haven, but this was nothing like that, it was 40 degrees below zero.

What is happening where you live? Find out by adding your postcode or visit InYourArea

“We weren’t a stadium act. We could draw the same amount of people as the Stones but we’d do it over five nights.”

But touring and TV appearances left him little time to write songs or pick and arrange new material. “In retrospect we should have toured in the Summer and done Vegas and Tahoe the rest of the year. We were doing the best we could but there was too much on me.”

He still picked winners though – Richard heard Bette Midler sing I’ll Never Fall In Love Again on TV, and Goodbye To Love referred to in a 1940 Basil Rathbone film. The Carpenters went on to sell more than 100million records…and attract a stalker.

In 1973, a man turned up outside the family home in Downey in a GTO blitzed with “Jesus saves” stickers. He told their father Harold that Karen wanted to see him because all of her songs were aimed at him.

After returning repeatedly, the obsessive fan broke into the house, telling the arresting police officers that he was Karen’s fiancé.

The pressures of stardom were complicated by a hugely hostile rock press. President Nixon describing the Carpenters as “young America at its best” didn’t help. It took decades before their music was appreciated for its remarkable combination of novel arrangements and sublime multi-layered harmonies.

In 2018, Richard recorded the 18-track Carpenters With The Royal Philharmonic Orchestra album; next month he releases an album of piano interpretations of their greatest hits.

“My job was to arrange them in a way to do them credit without extra orchestration – just piano. Keep the song recognisable without trampling on the melody.

“The human soul is built in with a love of melody, whether a person can sing or not. Bing and Perry Como made singing seem so easy…the average guy in the shower thought he sounded just like Bing but of course he didn’t…”

Disney musicals aside, he feels that few good songs are written today. “It’s been fifty years since we signed, before that there were Cole Porter, Rodgers and Hammerstein, all those marvellous songs…It’s rare now that someone wants to sound like themselves, they’re trying to sound like somebody else.

“You need someone who can sing the good melody and then songs will be written for that person. One feeds the other.”