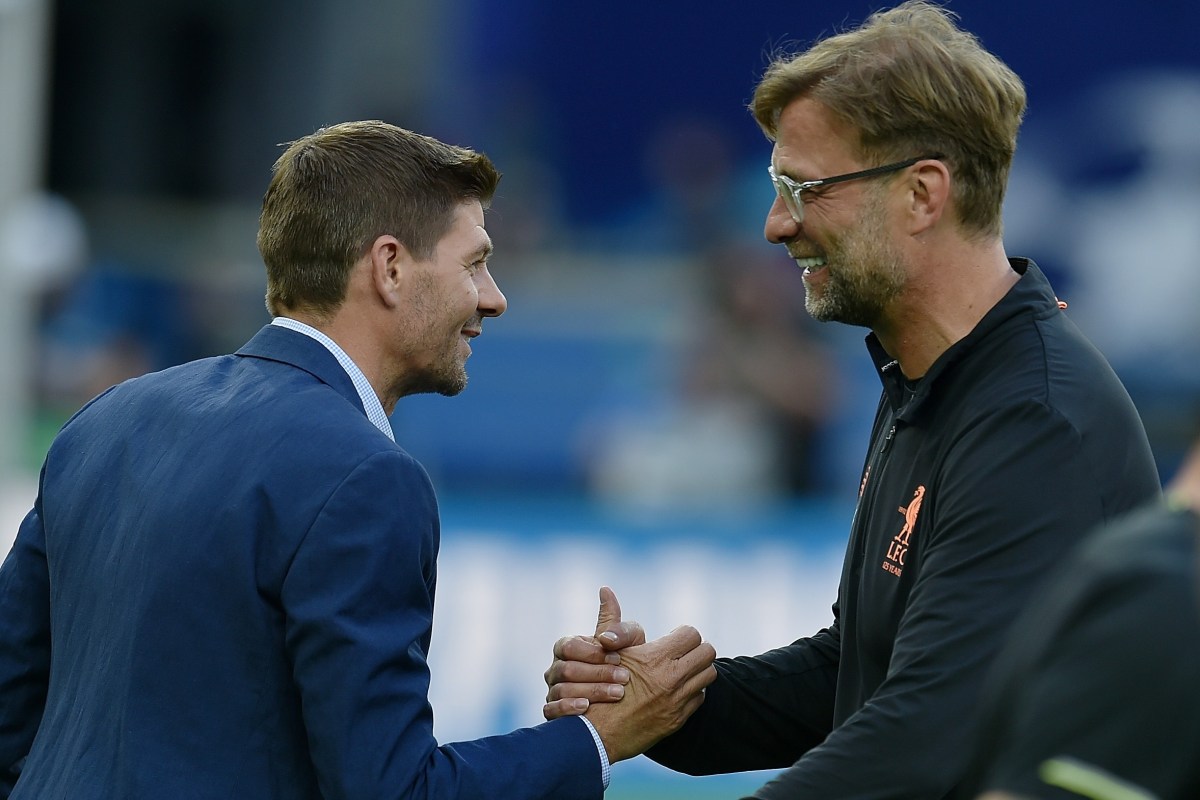 Steven Gerrard is set for an emotional return to Anfield on Saturday as his Aston Villa side take on his beloved Liverpool.

Gerrard played 710 times for his boyhood club and is adored by the fans on Merseyside after a glittering career having come through their academy.

The 41-year-old will have the unfamiliar feeling of being in the opposition dugout at Anfield as his new club take on Jurgen Klopp’s side.

It will be the first time in his career Gerrard has faced the Reds in any capacity, and he is sure to get a brilliant reception from supporters and a hug from his opposite number.

The pair know each other well, despite Gerrard leaving Liverpool the summer Klopp joined.

The former midfielder coached the club’s Under-23s while Klopp was first-team boss and the German has always been on hand for advice.

The pair have waxed lyrical about each other over the years and here is what they have said.

After Liverpool won the premier League title, Klopp said: “My message is: it is for you out there. It is really for you. I hope you feel it. I hope you saw it last night, not only last night but after a long time, last night again. It is for so many people.

“Kenny Dalglish and Graeme Souness spoke to me on another interview and they were obviously very positive about us.

“That’s nice, [but it’s] thanks to them because this club is built on what they did. It is built, of course, on Shankly and Paisley and Fagan and all the others, but on these players…

“Steven Gerrard – this club is built on, in the last 20 years, on Stevie’s legs.

“He had to carry all of the pressure on his shoulders and he did that exceptionally. I am really happy that we can deliver this title to him as well.”

Klopp told FourFourTwo in 2019: “Kenny and Stevie have both been a really big support from day one.

“Second, my position as a manager has nothing to do with the people around me. If Liverpool were to sack me tomorrow, then maybe Kenny would be the first choice to replace me, but they would probably bring Stevie down from Glasgow.

“If you ask who should follow me, I’d say Stevie. I help him whenever I can.

“If someone gets your job, it’s not about them, it’s about you not being good enough.

“I’m old enough to know that I give this job everything. I’m not a genius, I’m not perfect, but I give the club 100 per cent. If that’s enough, great. If it’s not, then it’s just the problem of the situation.

“I’m not jealous, I’m not sceptical. I’m completely open. If you want my help, you’ll get it.

“My family often thinks that I’m too quick to open up, but I think being any other way is a waste of time. I love life, I love my job, I like most people – that’s how it is.”

After Gerrard was named Aston Villa boss, Klopp said: ”Stevie is doing everything right so far, getting some experience here with the academy, taking his coaching experiences to Rangers, being very, very, very successful there, then he had made the next step. So far it has been the perfect career.

“While I’m here, it’s difficult but of course [he can be Liverpool’s future manager]. But it is important that from now on that the Steven Gerrard Aston Villa chapter starts and that’s exactly what will happen.”

BETTING SPECIAL – Get Lukaku, Ronaldo and Salah to score first at 50/1

Kop hero Gerrard admitted he would loved to have played under Klopp at Liverpool.

He told Sky Sports: “I always had little thoughts as I’ve gone along. Should I have stayed at Liverpool? Should I have signed a year extension? Maybe I might have been able to have that cameo under Jurgen Klopp as maybe a squad player.

“These things always cross my mind but, look, I made decisions. I am very proud of my Liverpool career, I am very proud of where I am up to now in my management. I want to give that my full focus and keep trying to learn and grow and improve and see where that journey takes me now.

“But, of course, you always have little moments – imagine if I’d stayed at Liverpool a bit longer and maybe I’d bumped into Klopp, as someone who could maybe have given him 10-15 minutes off the bench. Of course it has crossed my mind – I would have loved that.”

Gerrard said in 2018: “I remember having a conversation with Jurgen about management before I even took this role – what are some of the key things you can tell me? What can I take from you that will help me moving forward?

“He always said to try and be as balanced as you can. Now I know exactly why he said that.

“Because this journey takes you all over the place – incredible feelings, but it has also taken me down as well.”

Gerrard has always downplayed his links to being Liverpool manager, largely out of respect for current boss Klopp.

He told ITV in March: “The Liverpool fans don’t want me to be the manager.

“They want Jurgen Klopp to continue to be the Liverpool manager – and I’m totally with all of them.

“We shouldn’t talk about this. We have one of the best managers leading our club at the minute. I love him.

“I’ve got a job here. I don’t think it’s helpful to talk about this and I hope Jurgen stays at Liverpool for many years.”

After being named Aston Villa boss, Gerrard said: “I’ve been in touch with Klopp. I bump into him when he walks his dogs.

“He sent me a message saying he is looking forward to a big hug on the side when Villa play Liverpool next month.”

Gerrard’s eyes on the prize

Despite the furore over his Anfield return, his love for the club and his close bond with Klopp, though, Gerrard insists he’s heading back to Liverpool with one things on his mind…

Getting the win for Aston Villa.

“For me, I really respect and understand the noise around the game for obvious reasons as I’m going back to a club I spent many years there,” he said in his pre-match press conference.

“So it brings a smile to my face for many reasons. One, because I’ve got a good relationship with a lot of people at the club. I had a fantastic time there. I had a really good journey and I’m a local boy and supported them growing up and always will support that team. Of course I will.

“That’s my only focus. The noise is for other people to get excited about. For me, it’s about preparing the team in the best way I can to get a positive result for Aston Villa. That’s the way I will be.

“Everyone in that stadium will know me well enough to know what I’m about and what I’m going to Anfield for.”

Like Gerrard, Klopp insisted it will be strictly business as soon as the whistle blows at Anfield.

But the Liverpool boss admits before and after the game will likely be a celebration of one of the city’s favourite sons, and that he’ll very likely take his place in the Reds hotseat one day.

“Wonderful story. I can imagine how his feelings are,” Klopp said in his press conference.

“It’s not easy for a world-class player to become an outstanding manager, but it’s possible and it looks like Stevie has all the skills you need. I’m really happy for him.”

Gerrard has been touted as a long-term successor to Klopp and the German believes the former Reds captain is destined to manage the club in the future.

“Yes, absolutely. The only thing is when is the right moment for that. I think it will definitely happen and that is good for everybody,” he added.