Shane Warne has urged an out of form Glenn Maxwell to give himself “a chance” as he seeks to make an impact in tonight’s T20 World Cup Final.

Despite being one of the world’s most dangerous T20 players, Maxwell has struggled mightily during Australia’s World Cup campaign, managing just 36 runs in six visits to the crease.

While Maxwell has become known for his 360 degree strokeplay, he has succumbed to his switch hit twice in this tournament, including in his last knock in the semi-final, and Warne has urged the 33-year-old to put his extravagant shots away at the start of his innings. 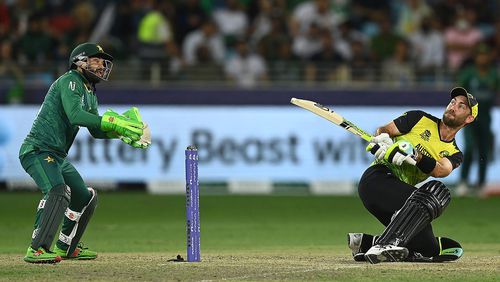 “I know he hasn’t got the runs he would’ve liked and he’s had a few opportunities in this tournament so far, but I think he’s the type of guy who’s never out of form, the next innings could be the one.

“For me, you’ve just got to have him in your side because he can do so much and he can mess with the bowlers.

“I think when Maxwell’s at his best he gives himself a chance and he’s a little bit more selective, he doesn’t try and impose himself too quickly. He gets himself in, he plays nice and straight and knocks it down the ground and then when he starts to get a few boundaries away, that’s when he’ll start getting funky and try his different shots.

“Sometimes he probably outsmarts himself because he’s got so many shots. There’s not too many batters in the world that have Glenn Maxwell’s shots. Give yourself a chance, Maxy, would be my advice, and then take them down.”

Maxwell has historically fared well against New Zealand during his T20 career, and currently averages 29.42 in nine matches against the Black Caps at a strike rate of 157.25.