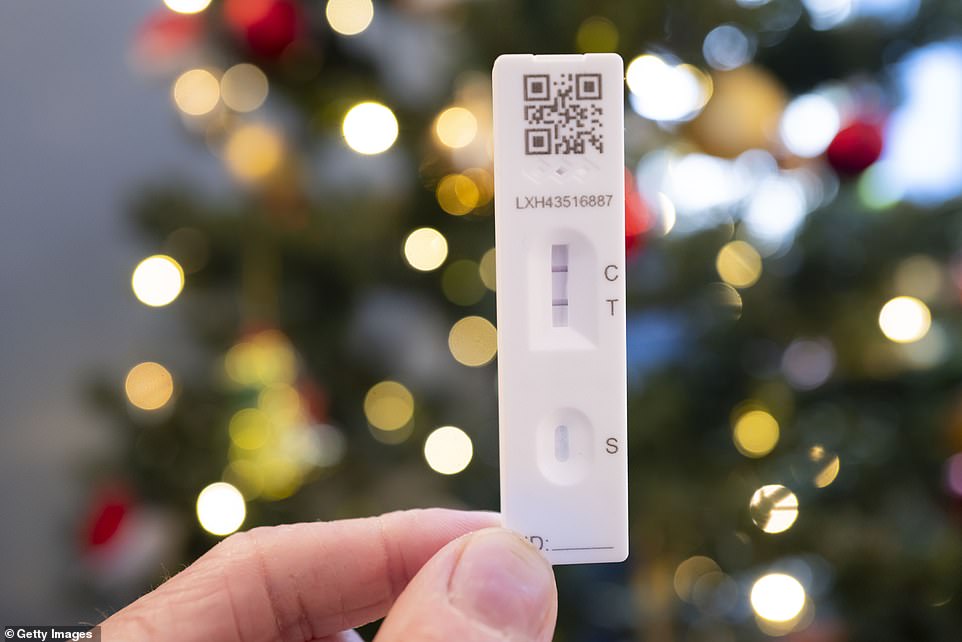 People across the UK were forced to abandon plans and cancel on their visitors after testing positive for Covid-19 on Christmas Day.

Some of those who were given the bad news took to social media to share their recent test result and the impact it had on their plans for the day.

While many were disappointed to spend time away from their families, others still found the positives, including those who were able to get out of seeing the in-laws.

MailOnline analysis revealed on Friday that nearly 900,000 people could be forced to spend Christmas Day in self-isolation after catching Covid in the days before December 25.

It comes as a record 1.7million people had Covid last week and it was revealed the ten worst-hit by Covid areas in England are all within a three square mile radius in south London.

The capital is being battered hardest by the supermutant Omicron variant after quickly becoming a hotbed for the strain earlier this month, with one in 20 infected in the capital according to Office for National Statistics (ONS) data.

Pictured: A graph showing the Covid infection rate in England based on data from Office for National Statistics

Those who shared news of their positive test results  on social media included a woman who was forced to cancel plans to host her family on Christmas Day after her nine-year-old son tested positive in the morning.

One user said her whole family had tested positive for Covid-19, while another woman said she tested negative in the morning and when she tested again in the evening she was positive.

While another Twitter user said he was due to visit his in-laws for the first time since 2019, only for his youngest to test positive two hours before they got together.

‘I literally know so many people who have tested positive on Christmas Day. That’s not very Christmassy’, said another.

But while some people were disappointed, others said they had ‘made the most of it’.

As the wave of infections continues across the UK, ministers are planning to send door-to-door teams armed with Covid jabs to reach the estimated five million people yet to be inoculated.

Government dashboard data shows there were 122,186 positive tests across the country on Friday, which was up about 30 per cent on the week before and more than double the figure a fortnight ago.

The new infections meant nearly 900,000 Britons who tested positive in the last 10 days faced spending Christmas Day in self-isolation — although people who tested positive a week ago in England can be let out early if they come back negative on lateral flows.

Meanwhile separate ONS figures revealed nationally there were 1.69million infections per day in the week up to December 19 — last Sunday — rising 55 per cent compared to the previous week.

The survey — based on swabs of more than 555,000 people — is regarded as the most reliable indicator of Britain’s Covid pandemic because it uses random sampling rather than relying on people coming forward for tests.

Despite there being a record number of infections last week, the ONS’ findings are out of step with gloomy Government modelling that has suggested Omicron was doubling nationally every two days.

Discussions between the Department of Health, NHS England and No 10 over the past week have looked at a nationwide drive to send vaccine teams to areas with low uptake rates as a crucial way to avoid lockdown and other restrictions.

It is also seen as a way to get jabs to rural areas or households where people cannot easily get to a vaccination centre.

This comes as SAGE warned the UK is about to be hit by a large wave of Covid hospitalisations and the peak could be even higher than last winter despite the reduced severity of Omicron.

Reports have claimed ministers are watching hospitalisation numbers in the capital, with a two-week ‘circuit breaker’ lockdown set to be imposed if daily numbers surpass 400

Meanwhile, hospitalisations in London were dangerously close to the Government’s threshold of 400 for more national restrictions, reaching 386 on December 22.

The rising statistics came as SAGE warned the NHS still faces a wave of Covid hospital admissions on par with or worse than previous peaks.

Mounting evidence — including findings of three key UK studies — has indicated the Omicron variant is up to 70 per cent less likely to cause hospitalisation than Delta.

But SAGE — which has advised Government throughout the pandemic — warns the variant is spreading so fast that it could offset any reduction in severity.

In minutes from a meeting on December 23 published last night, the Government’s Scientific Advisory Group for Emergencies warned that the peak on hospital admissions ‘may be comparable to or higher than previous peaks’ – including the second wave in January.

But MPs and hospitality bosses have warned Boris Johnson not to bring in new restrictions before New Year’s Eve or risk ‘devastating’ businesses.

The vaccination drive continued throughout Christmas Day. NHS England said thousands of first, second and booster jabs were given yesterday.

A very Covid Christmas: Rhian Sugden tests positive on the big day while Dianne Buswell is forced into isolation and furious Emily Atack reveals she’s been kept away from her mum

Rhian Sugden led the stars being forced to cancel their elaborate plans after testing positive for coronavirus on Christmas Day.

The glamour model, 35, shared a photo of a lateral flow test to Instagram along with a ‘Merry Christmas’ sticker.

MailOnline analysis revealed on Friday that nearly 900,000 people could be forced to spend Christmas Day in self-isolation after catching Covid in the past 10 days, with celebrities being no exception to the rule.

A very Covid Christmas: Rhian Sugden tested positive on the big day as she led a host of stars who had their festive plans ruined by the virus

Among those forced to isolate was Rhian, who later revealed she had been being contacted by fans who had incorrectly concluded that she had shared news that she’s expecting a baby.

In her caption, Rhian wrote: ‘The amount of people that think that was a positive pregnancy test!?? Where have you been for the last 2 years!!?’

Meanwhile, Dianne Buswell, 32, and her boyfriend Joe Sugg, 30, tried ‘to see the positives in the POSITIVE’ after the Strictly dancer contracted Covid.

She shared a masked-up selfie with her YouTuber boyfriend, who pulled a funny face while raising a glass of fizz.

Tragic: The glamour model, 35, shared a photo of the lateral flow test to Instagram along with a ‘Merry Christmas’ sticker

Optimistic: Meanwhile, Dianne, 32, and her boyfriend Joe Sugg, 30, tried ‘to see the positives in the POSITIVE’ after the Strictly dancer contracted Covid’

The optimistic Australian Strictly star wrote: ‘ Trying to see the positives in the POSITIVE [laughing emoji, Christmas tree emoji] to spite the situation actually we are having a lovely day ❤️.

‘And I sure hope you all are too xx Merry Christmas all [sic] @joe_sugg.’

Joe added: ‘Second year running for us having an unusual, unexpected Christmas.. unfortunately Diannes got the ol’ covid (and a mini Christmas tree) so we’re staying put in Santa land for now to stay safe.

Oh no! On Christmas Eve, the YouTuber shared that they will be spending Christmas Day in Lapland as Dianne has tested positive for Covid-19

Lifting spirits: Dianne shared a screenshot from her family FaceTime, writing: ‘I’m so lucky to have the most loving family can’t wait to be back with you all’ xx

‘It’s not exactly how we’d have liked to have spent Christmas Day but the main thing is that she’s already feeling a lot better and it’s another Christmas we’ll always remember.

‘Hope you all have a lovely day tomorrow and get merry and get your fair share of pigs in blankets.’

Emily Atack, 32, took to the photosharing platform on the big day to confess that she was sorely missing her mum Kate Robbins, 63, on their first Christmas apart.

Alongside, she uploaded an adorable throwback snap of the pair cosying up together during a recent trip to Paris.

The Inbetweeners star wrote: ‘Gutted to be having my first Christmas away from mum. But she’s alive so I won’t complain too much.

She still made the best of her situation, however, taking to Instagram later to share a snap sipping champagne alongside her pet pooch.

She captioned the image: ‘Merry Christmas you filthy animals. A very different one this year, but feeling grateful nonetheless. Sending love to you all ❤️’

Frustrating: Emily, 32, (left) took to the photosharing platform on the big day to confess that she was sorely missing her mum on their first Christmas apart

Positives: Emily still made the best of her situation, however, taking to Instagram later to share a snap sipping champagne alongside her pet pooch

Another star who had their celebrations disrupted was Olympic rower James Cracknell, who tested positive for Covid on the day.

Alongside a snap glaring at his lateral flow test, he penned: ‘Santa dropped off what I’d been “waiting all year for.” Covid. Trying to explain to Dug that I’m ill not just lazy. He’s not buying it. Have a fantastic Chirstmas everyone. Jx’

Seeing the funny side, James later shared a picture with his pet pooch that he captioned: ‘I’m no Dr Dolittle but I reckon he’s thinking “you can’t give me covid and you’re going nowhere.” Right on both counts.’

Bad timing: Another star who had their celebrations disrupted was Olympic rower James Cracknell, who tested positive for Covid on the day

He penned: ‘Santa dropped off what I’d been “waiting all year for.” Covid. Trying to explain to Dug that I’m ill not just lazy. He’s not buying it. Have a fantastic Chirstmas everyone. Jx’

While it is possible for pets to contact Covid, Britain’s Chief Veterinary Officer Christine Middlemiss has stressed that Covid cases in animals are ‘very rare’.

Dogs become infected in the same way as humans do, by inhaling droplets after an infected person coughs or sneezes.

There is no evidence that animals transmit it to humans, with research suggesting they do not ‘shed’ enough virus to be infectious.