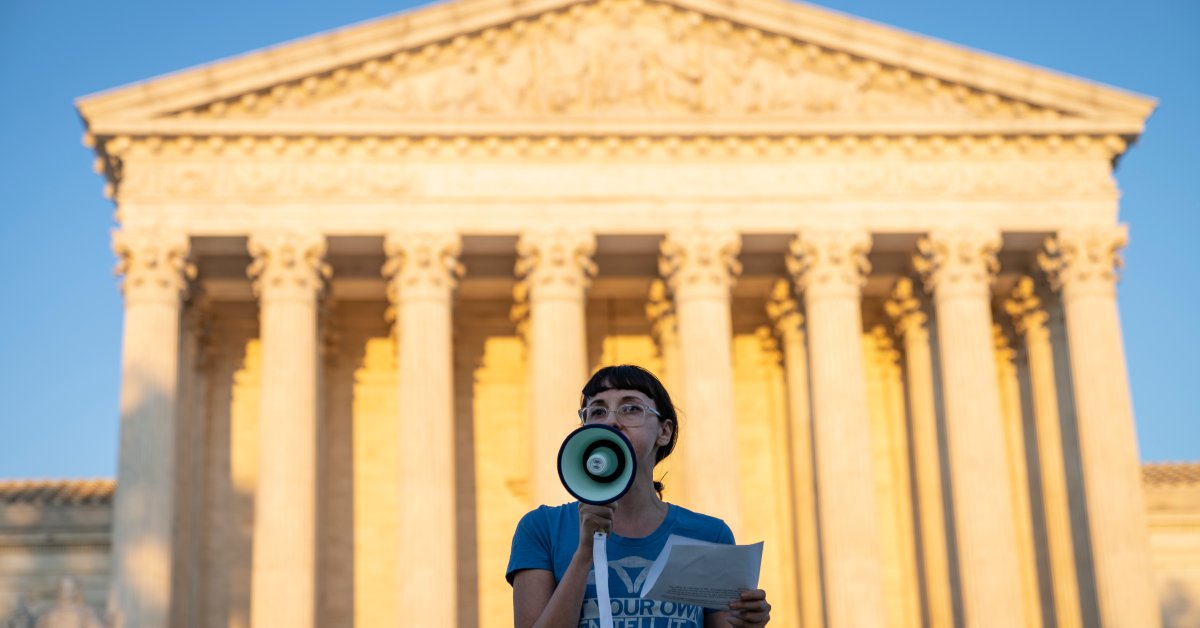 The Supreme Court will hear oral arguments Monday in two cases about the controversial Texas law that has banned most abortions in the state. The eventual verdict could have extraordinary implications for abortion access, as well as a slew of other rights, nationwide.

The dispute over the Texas law is the first of two major abortion cases to come before the high court this term. The second is scheduled for Dec. 1, when the justices will hear arguments about a Mississippi law that bans abortions after 15 weeks—a direct challenge to the constitutional right to abortion established by Roe v. Wade.
[time-brightcove not-tgx=”true”]

This term marks the first time that all three of former President Donald Trump’s nominees—Justices Neil Gorsuch, Brett Kavanaugh and Amy Coney Barrett—will hear an abortion case from the bench, which is now tilted 6-3 toward conservatives.

In the Texas case, the Supreme Court is reviewing two suits challenging the law: one brought by the federal government, and one brought by a group of abortion providers and advocates. But the justices will not directly consider the constitutionality of the law, known as Senate Bill 8 (SB 8), which prohibits abortion after roughly six weeks into a pregnancy. Rather, they will consider two procedural questions about whether Texas can use SB 8’s unique structure, which puts private citizens rather than state officials in charge of enforcing the law, to avoid federal court review.

These seemingly wonky questions could have far-reaching effects on the U.S. judicial system. Legal scholars warn that if the justices side with Texas, states would suddenly be free to pass a raft of other laws restricting other constitutional rights, like gun ownership or same-sex marriage.

Read more: The Supreme Court’s Texas Abortion Case Could Give States More Power Than Ever

On Oct. 22, the Supreme Court agreed to take up the Texas cases on an extremely expedited basis and deferred the question of whether to block the law until after oral arguments. That decision allowed the law to remain in place, meaning that most abortions in Texas remain banned for now. Justice Sonia Sotomayor dissented from that decision, saying that she would have blocked the law while the challenge continued.

“Women seeking abortion care in Texas are entitled to relief from this Court now,” she wrote. “Because of the Court’s failure to act today, that relief, if it comes, will be too late for many.”

A “complex and novel” enforcement mechanism

Texas passed SB 8 near the end of its legislative session last spring. When it took effect Sept. 1, it became the most restrictive abortion law in the nation. It makes no exceptions for rape or incest, and bans abortions once fetal cardiac activity is detected—a point about four weeks after conception, which is before many women know they are pregnant. Abortion clinics estimate the law would have stopped 85 to 90% of the abortions that took place in the state before it went into effect.

The law is before the Supreme Court because of its unique enforcement mechanism. Typically, to challenge a law’s constitutionality, a plaintiff files suit, naming government officials as the defendants. But the Texas law was specifically written to make that kind of challenge difficult. That’s because the law bars state officials from enforcing it, and instead empowers private citizens to sue anyone who performs an abortion beyond its limit, as well as anyone who “aids and abets” someone in obtaining an abortion.

Patients themselves can’t be sued, but doctors, clinic staffers, counselors, clergy, family members, people who help pay for the procedure or those who drive someone to get it are all fair game. The law also incentivizes lawsuits by saying that plaintiffs don’t have to live in Texas or have any connection to an abortion to sue, and they are entitled to at least $10,000 plus their legal fees if they win. Clinics and other defendants can be sued multiple times over the same abortion, and even if they win, they are not entitled to legal fees.

That enforcement framework is the focus of both Nov. 1 cases before the Supreme Court. In the case brought by the Department of Justice, the justices will consider whether the federal government can sue in federal court to “obtain injunctive or declaratory relief against the state, state court judges, state court clerks, other state officials, or all private parties to prohibit SB 8 from being enforced.” In the case brought by abortion providers and advocates, the court will consider whether “a state can insulate from federal-court review a law that prohibits the exercise of a constitutional right by delegating to the general public the authority to enforce that prohibition through civil actions.”

Last summer, abortion providers sued a collection of state judges, clerks, regulatory officials and an anti-abortion activist who they said were involved in enforcing the law. But when they asked the Supreme Court to intervene and block the law before it took effect in September, the high court refused in a divisive 5-4 vote. The conservative majority cited “complex and novel” procedural questions. It was not clear, the majority found, that the providers were suing the correct people. (Chief Justice Roberts joined the three liberal justices in dissent.)

Read more: Inside The Small Group of Doctors Who Risked Everything to Provide Abortions in Texas

The Department of Justice then sued Texas in a separate challenge to SB 8. On Oct. 6, District Judge Robert Pitman ruled in favor of the federal government, blocking the law. Some abortion clinics began providing abortions past six weeks once this happened—but it was a short-lived development. Just 48 hours later, the Fifth Circuit Court of Appeals issued a stay of Pitman’s ruling, which put the law back into effect. The Justice Department then ask the Supreme Court to lift the stay. Meanwhile, the abortion providers filed another request that the Supreme Court hear their case quickly before the lower courts weigh in.

Texas has argued that neither lawsuit is the proper avenue to challenge the law. “The Constitution does not guarantee pre-enforcement review of state (or federal) laws in federal court,” Ken Paxton, the state’s attorney general, wrote in his brief before the Supreme Court. Instead, Paxton said the only right way to challenge the law is for someone to take the risk of violating it, get sued, and then challenge the law’s constitutionality during their defense.

Jonathan Mitchell, a lawyer who helped design the law, also filed a brief arguing that SB 8’s unique enforcement mechanism bars the Department of Justice from challenging the constitutionality of the law at all. “The constitutionality of the statute must be determined in the lawsuits between private parties, not in a preemptive lawsuit brought against the sovereign government, which is not ‘enforcing’ the statute but merely allowing its courts to hear lawsuits arising under the disputed statutory enactment,” he wrote in a brief before the high court.

If the Supreme Court rules in favor of Texas—deciding, in effect, that a law written to include this unique enforcement mechanism bars the federal government or others affected from intervening—it would reshape the entire U.S. judicial system. Legal scholars have warned that allowing private citizens to enforce laws through the threat of litigation could be used to ban an array of constitutional rights, from abortion to gun ownership to same-sex marriage.

Florida has already introduced a bill in its state legislature that mimics Texas’s SB 8 with regard to abortion, and other conservative states have said they are looking to follow the model as well.

Read more: The Fate of Roe v. Wade May Rest on This Woman’s Shoulders

Advocacy groups from across the ideological spectrum have filed amicus briefs warning of this issue and urging the Supreme Court to strike down what they argue is a blatant attempt to avoid judicial review. A brief filed by the gun rights group Firearms Policy Coalition, for example, says the case “is important not because of its specific subject matter of abortion, but instead for Texas’s cavalier and contemptuous mechanism for shielding from review potential violations of constitutional rights.”

Brian H. Fletcher, the Justice Department’s acting solicitor general, argued that a ruling upholding Texas’ law would create a world in which any court precedent or previous law could be circumvented by a state that wants to do so. “Texas insists that the Court must tolerate the State’s brazen attack on the supremacy of federal law because S.B. 8’s unprecedented structure leaves the federal Judiciary powerless to intervene,” he wrote in the Justice Department’s brief. “If Texas is right, no decision of this Court is safe.”

What’s going on in Texas for now

The law will remains in effect unless and until the justices decide to halt it after Monday’s oral arguments. Since early September, Texans have flooded abortion clinics in surrounding states in search of care, and clinics in the state are struggling to keep their doors open.

Clinics in Texas have seen this happen before. When the state passed a law placing major restrictions on abortion in 2013, roughly half of the state’s clinics closed. Even after the Supreme Court struck down that law in 2016, few clinics ever reopened.

“The legal limbo is excruciating for both patients and our clinic staff.  Lack of access to safe abortion care is harming our families and communities and will have lasting effects on Texas for decades to come,” Amy Hagstrom Miller, president and CEO of Whole Woman’s Health, said in a statement when the Supreme Court scheduled this hearing without blocking the law in the meantime. “We’ve had to turn hundreds of patients away since this ban took effect, and this ruling means we’ll have to keep denying patients the abortion care that they need and deserve.”