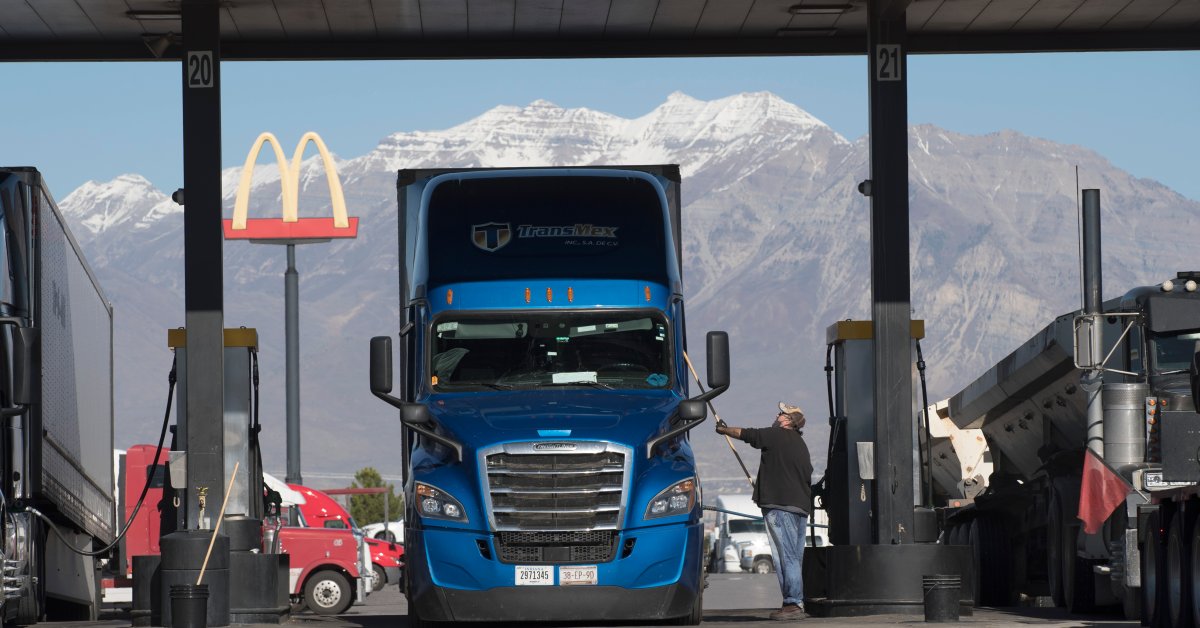 As the U.S. contends with supply-chain problems that could make holiday shopping harder, one explanation comes up again and again: The country doesn’t have enough truckers. “The Biggest Kink in America’s Supply Chain: Not Enough Truckers,” a New York Times story read this week. Where Are All the Truck Drivers? Shortage Adds to Delivery Delays, cried a Wall Street Journal headline the week before.

The stories inevitably cite a report from the American Trucking Association that says the industry is short 80,000 drivers and quote experts who blame the alleged shortage on a lack of people interested in these difficult jobs. Yet, in California alone, there are 640,445 people who hold active Class A and Class B commercial driver’s licenses, according to the Department of Motor Vehicles. Meanwhile there are only 140,000 “truck transportation” jobs in the state, according to the state Employment Development Department.
[time-brightcove not-tgx=”true”]

Those numbers speak to the fact that there are hundreds of thousands of people who become truck drivers every year—some with their training subsidized by the government—only to find that the job pays much less than they’d been led to believe, and that working conditions in the industry are terrible.

A Problem of Too Many Truckers

There’s no trucker shortage; there’s a trucker retention problem created by the poor conditions that sprung up in the industry in the wake of 1980s deregulation. Turnover for truck drivers in fleets with more than $30 million of annual revenue was 92% at the end of 2020, meaning roughly 9 out of every 10 drivers will no longer be working for that company in a year.

“​​There’s no shortage of workers, that’s the narrative that gets propagated by industry leaders,” says Mike Chavez, the executive director of the Inland Empire Labor Institute, which is working on a partnership to create better recruiting and retention programs for drivers. “We still have a lot of positions that can’t be filled because of the working conditions.”

There were 1.5 million people employed in trucking last month, according to the Bureau of Labor Statistics, just 1% fewer than in October 2019, and 15% more than a decade ago. That’s a faster growth rate than overall nonfarm employment, which is still down 2% from October 2019 and up only 12% from a decade ago.

In fact, there are so many truck drivers right now that brokers are able to pit them against each other and worsen conditions, says Sunny Grewal, a Fresno, Calif.-based driver. Grewal, 32, has been driving since 2010, and has a refrigerated truck, which he uses to haul fruits and vegetables. It costs him $1.75 to $2 to drive a mile empty, so any job that pays less than $3 a mile isn’t worth it, he says. Yet as brokers see more drivers looking for jobs, they post more loads that pay less and end up requiring a lot of unpaid waiting around. “If they know there are a lot of carriers, they treat you like crap,” Grewal says.

He’s recently gotten jobs hauling loads of produce, only to arrive and be told the produce hasn’t even been picked from the field. He has to wait until it’s picked and packaged, and doesn’t get paid for the first four hours he waits. There have been times when he’s waited 27 hours to pick up a load. Truckers get paid per mile driven, so all that waiting means lost money, especially since federal regulations stipulate that he can only drive 11 hours out of every 24. He only gets paid $150 for a “layover day,” which is a day spent waiting. He can’t tell brokers he doesn’t want to wait around, because they’ll find someone who will take the load, especially because rates are high right now.

“If I refuse it, someone else will take it,” he told me.

There are other frustrations—even when he has to wait for hours outside warehouses, he’s not allowed to use their bathrooms, and he can’t leave or he’ll lose his place in line. Government regulations mandate that he takes a break every 14 hours (and can drive 11 of those 14 hours), there aren’t enough places where he’s allowed to park his truck and sleep. Truckers across the country have long complained that the lack of truck parking creates unsafe conditions; Grewal shudders when he hears stories of truck drivers killed while at remote locations.

It’s hard to imagine another profession where people don’t get paid for hours they spend at work—unless it’s gig economy jobs where Uber drivers don’t get paid for the time they spend waiting for a passenger to order a car. Some of the problems in trucking arose because the job essentially went from a steady, well-paid job to gig work after the deregulation of the trucking industry in the 1980s, says Steve Viscelli, a sociologist at the University of Pennsylvania and the author of the book The Big Rig: Trucking and the Decline of the American Dream.

Deregulation essentially changed trucking from a system where a few companies had licenses to take freight on certain routes for certain rates into a system where just about anyone with a motor-carrier authority could move anything anywhere, for whatever the market would pay. As more carriers got into trucking post-deregulation, union rates fell, as did wages. Total employee compensation fell 44% in over-the-road trucking between 1977 and 1987, he says. Today, drivers get paid about 40% less than they did in the late 1970s, Viscelli says, but are twice as productive as they were then.

Now that truck drivers are gig workers, the inefficiencies of the supply chain are making the jobs worse and worse, as Grewal has discovered. “So much of this is about the inefficient use of time. Is there a shortage of truck drivers? Probably not. But they are certainly being used less and less efficiently,” Viscelli says. “That’s the long term consequence of not pricing their time.”

Ironically, the louder the narrative becomes about the “shortage” of truck drivers, the more resources pop up to funnel people into driving. In 1990, the trucking industry figured it needed about 450,000 new drivers and warned of a shortage; in 2018, before the pandemic, the industry said it was short 60,800 drivers.

During the pandemic, government money paid for even more people to attend truck driving school. California paid $11.7 million to truck driving schools in the state in 2020, up from just $2.4 million in 2019, primarily from federal money through the Workforce Innovation and Opportunity Act. The recently-passed infrastructure bill includes initiatives to grow the trucking workforce, including creating an apprenticeship program for drivers under 21 to work in interstate commerce. But the vast majority of the people who pay for truck driving school don’t end up becoming truck drivers.

“Every Monday, they’ve got 100 new people they’re going to put through orientation, and in three months, less than half of them will be in the industry,” says Desiree Wood, the president of REAL Women in Trucking, a network that provides resources and support to female drivers.

Many people take out debt to get a CDL, or enter into what Viscelli calls “debt peonage”—essentially going to school tuition-free but promising to work for a certain trucking company to pay off their debt. But getting your CDL is just the first step, says Wood. After you get your CDL, most drivers have to get further training, where they team up with another driver and learn how to drive and maneuver a truck, by actually doing it on the road. These other drivers are often not specialized trainers—sometimes they only have a little more experience than the newbie driver. This model is especially detrimental to women, many of whom have filed complaints about being sexually assaulted by their partners, who are responsible for determining whether they get the final okay to drive. Long-haul trucking company CRST settled a lawsuit in May brought by a woman who says she was raped by the lead driver, terminated, and then billed $9,000 for her training.

It’s during this stage that many people drop out, either because their trainers aren’t helpful, or they get intimidated by ice on the road, or because they’re not making much money as a team driver. But long-haul trucking companies move a lot of their freight through student-driver partnerships like these. When student drivers quit, the companies just has more trainees to sub in, fed into the industry by the myth of a trucker shortage. “Over-recruiting is the biggest part of the problem,” says Wood.

Blaming supply chain problems on trucker shortages enables trucking companies to recruit more people and charge them for school, only for the students to realize that trucking, as it exists today, is not a desirable profession.

“We need to find ways to attract, recruit and retain drivers,” said Gene Seroka, executive director of the Port of Los Angeles, on a call about supply chain backlogs last month. “ We’re gonna have to think about new compensation models, benefits packages, etcetera. We want to make this a profession that folks want to come to.”

Truck driving companies that pay workers well have much fewer problems with retention. Turnover at “less-than-truckload” fleets, where drivers can make $100,000 a year moving loads to local terminals where they are picked up by long-haul truckers, was just 14% in the same period that the overall industry experienced 92% turnover. Many of these drivers are unionized, Viscelli says, and work jobs similar to the ones they would have had before deregulation.

Of course, it’s not easy for trucking companies to just pay drivers more. If they tell a major retailer like Walmart that they’re raising the cost to haul a load, Walmart will only find a trucking company that can do it for cheaper. And trucking companies are dealing with many of the hardships of the supply chain backlog—they told me that they can’t get appointments to pick up or drop off containers at the ports of Los Angeles or Long Beach. Any increase in costs will be charged to the cargo owners whose stuff they are hauling—and likely passed onto consumers.

California’s landmark AB5, which would reclassify truck drivers from independent contractors to employees could force the system to become more efficient. The Supreme Court is currently deciding whether to hear a challenge to the law, which was vehemently opposed by truck driving companies.

In the meantime, says Grewal, there’s another way in which the supply chain shortages are making it harder to be a truck driver. The price of trucks has skyrocketed. He’s seen refrigerated trailers like his go for $100,000, 30% more than a year ago; dry vans—semi trailers enclosed from outside elements—have doubled in price, from $35,000 to $70,000. That means many would-be professionals who buy trucks after hearing that there’s a driver shortage will be hurting even more.