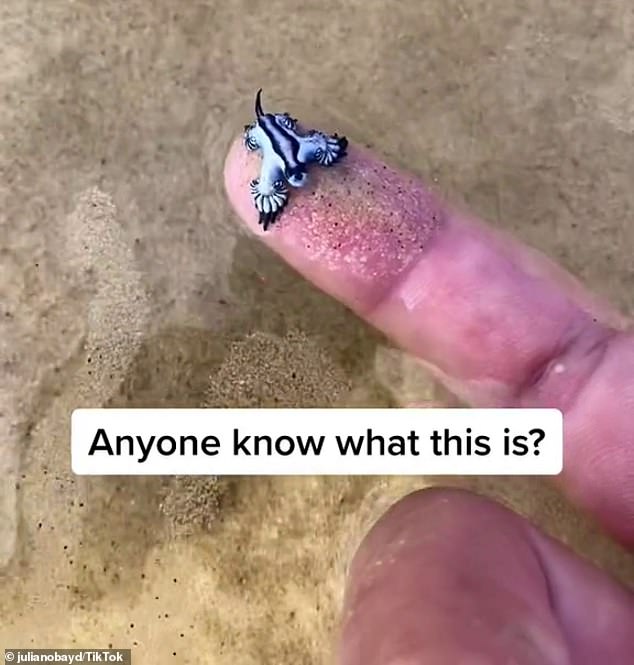 A curious swimmer who came across a striking blue sea creature on a beach unknowingly found himself handling a venomous sea slug.

Footage uploaded to TikTok on Wednesday shows a man pluck a blue-striped sea slug from the water while swimming at Stradbroke Island in Queensland‘s south-east.

Fascinated by the strange-looking creature the man took to social media to ask his 52.4,000 TikTok followers: ‘Anyone know what this is?’

But the beachgoer got more than he bargained for when a flurry of TikTok users pointed out he was actually playing with a venomous ‘blue dragon’ sea slug.

Also known as glaucus atlanticus, the sea slug can absorb the venom of other sea creatures when feeding including the blue bottle jellyfish or Portuguese Man o’ War – which can make someone seriously ill if stung.

After the poison is ingested it is stored by the blue dragon to be later released as a defence if it is threatened or touched.

While TikTok users took to the video to comment on its likeliness to a Pokemon, his followers were quick to inform him that the creature could be highly toxic.

‘That’s a glaucus atlanticus it’s a weird dragon thing that are commonly found on the beaches of Australia. It is a VERY poisonous animal,’ one person wrote.

‘It’s a blue dragon and they incredibly poisonous,’ commented another.

‘In Australia we call it a blue dragon do not touch’,’ added a third.

In 2018 the bizarre creatures washed up on beaches across Sydney.

Melissa Murray from Australian Museum’s warned beachgoers at the time not to touch the slugs because of its potentially dangerous sting.

‘The glaucus atlanticus normally has tentacles in its system. If another creature tries to eat it they use the tentacles as a defence mechanism,’ Ms Murray said.

‘So if you do see one, don’t pick it up with your hands. Use a bucket with water instead.’

Blue Ocean Slugs, or glaucus atlanticus, are small sea slugs that live in the ocean.

The blue ocean slugs are part of the ‘blue tide’ group of animals which includes bluebottle jellyfish.

What do they eat?

Feasting on some of the most poisonous jelly fish in the ocean, the blue dragons seem to favour the deadly Portuguese man o’war.

The blue slugs take the poison from the jellyfish it is eating and stores it to use against predators.

How big are they?

The rarely-seen blue dragons grown up to three centimetres long.

Where are they found?

The majestic looking slugs live in warm, tropical waters and follow the current which leaves them being washed up on shore at times.

Are they deadly to humans?

People are advised not to touch the blue sea slugs because they may receive a painful sting.

The sting could be potentially dangerous.