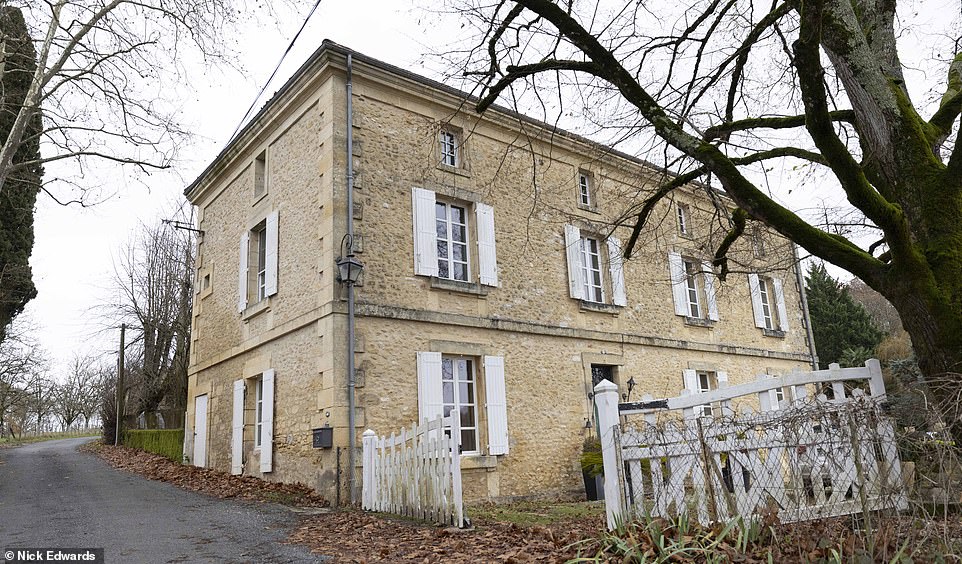 This is the luxury 18th Century French chateau where top Foreign Office mandarin Sir Philip Barton holidayed while thousands of desperate Afghans tried to flee Kabul in fear of the murderous Taliban.

Sir Philip, 58, the £185,000-a-year head of the Diplomatic Service, and his wife Amanda enjoyed a two-week break at this imposing stone-brick property in the heart of the Dordogne – one of the most picturesque regions of France.

The Permanent Secretary remained on holiday in France after Kabul fell to the Islamist fanatics last August, while his staff oversaw a shambolic system for allocating places on mercy flights.

Sir Philip stayed in France until 26 August – 11 days after the fall of Kabul – and during a car crash appearance before the Foreign Affairs Select Committee, he admitted this was a mistake.

‘I have reflected on this very carefully and if I had my time again I would not have done it,’ he told MPs this week.

Situated a short drive from the popular tourist town of Sarlat-la-Caneda and close to the beguiling Dordogne river, the château is estimated to be worth €1.2 million (£1 million). The Dordogne region is highly prized by expat Britons, Dutchmen and Germans who are willing to pay dearly for their dream French home.

Sir Philip, right, and his wife were guests of her sister Susan Colley, left, and husband Daryl, the CEO of a telecoms firm

The career civil servant, who has represented Britain in embassies across the world, stayed with his in-laws at the beautiful chateau set in the rolling hills in the Dordogne region which boasts numerous bedrooms and a vine-shaded terrace overlooking the valley below.

Horses graze in a paddock behind the house next to purpose-built stables.

Sir Philip, 58, and his wife Amanda were guests of her sister Susan Colley and her husband Daryl, the CEO of a French telecoms firm.

Mrs Colley today confirmed the Foreign Office chief had stayed at her home in the hamlet.

Standing on the doorstep of her 18th century, three-storey, mansion, she told MailOnline: ‘Philip Barton is my brother-in-law and he was here in the summer.

‘But I don’t want to discuss it. I know he has been criticised about what happened and I’m very upset about it.’

Sir Philip’s situation in the idyllic setting was in stark contrast to the scenes of chaos within the Foreign Office described to MPs by whistleblower Raphael Marshall in a damning 34-page dossier.

He told the committee that the operation was marked by a 9 to 5 culture, lack of coordination and overwhelmed officials unable to cope with the sheer scale of their task.

Mr Marshall estimated only five per cent of those Afghans seeking safety were given sanctuary by the British and pointed out that the chaotic prioritisation system meant that some of those most deserving of help were left behind.

A family friend of the Bartons back in Britain has defended the civil servant’s absence, claiming he was supporting his wife Amanda, following the death of her mother Joyce.

The friend told MailOnline: ‘Philip is a lovely guy and extremely hard working. He ‘s never at home. He leaves home early in the morning and returns late a night.

‘In August Philip and Amanda went on holiday to France to visit her sister Sue.

‘Their mother had died earlier in the year and they wanted to spend some time together to help each other through their grief.

‘I know he’s been criticised for not coming back to london when Kabul fell but he was on the phone all the time.

‘He wanted to be there for Amanda.’

On the day Sir Philip finally returned to work, an Isis-K member deployed a suicide bomb outside the gates of Kabul’s airport, killing at least 183 people.

Sir Philip said he regretted his decision to stay away and claimed that on 9 August, the day his holiday began, there was no certainty that Kabul would fall.

However that same day, it was widely reported that the Taliban had seized five provincial capitals in three days while Afghan air force pilots had deserted after a colleague was murdered.

Faced by claims from MPs that his continued absence represented a dereliction of duty, the civil servant repeated that he regretted his decision, saying his staff needed his visibility, but also claimed his absence had no impact on the number of people Britain was able to evacuate.

Responding to 25-year-old Mr Marshall’s testimony, Sir Philip said there ‘isn’t a clocking-off culture’ in the FCDO but that staff had been kept to eight-hour shifts to prevent ‘burnout’.

During his appearance before MPs, Sir Philip refused to say where he was on holiday, but disclosed it was partly in the UK and partly abroad.

The father-of-two has spent almost his entire career in the Foreign Office, joining in 1986 after a degree in economics and politics from Warwick University and a Masters at the London School of Economics.

His overseas postings have included Caracas, New Delhi, Cyprus and Gibraltar as Deputy Governor and Washington as Deputy Ambassador. He was British High Commissioner to Pakistan from 2014 to 2016.

He was Private Secretary to Prime Ministers John Major and Tony Blair.

He has also worked in the Cabinet Office as Director General on the 2016 Anti-Corruption Summit and as Director Foreign Policy and Afghanistan/Pakistan Coordinator supporting the National Security Council.

Kabul was overrun by the Taliban on Sunday August 15. Former Foreign Secretary Dominic Raab was severely criticised for not cutting short his holiday to Crete, and the permanent secretaries at the Home Office, Matthew Rycroft, and the Ministry of Defence, David Williams also came under fire for remaining on leave.

Mr Raab faced down calls for his own resignation in the Summer after it emerged he did not make a phone call to the Afghan foreign minister about getting interpreters out while he was at a five-star resort in Crete.

Officials initially claimed the task was delegated to a junior minister, but later it emerged that thecall never took place. The Foreign Office said it ‘was not possible to arrange a call before the Afghan government collapsed’.

A month later, the beleaguered Mr Raab was demoted from from the Foreign Office to the Ministry of Justice, though he was also granted the title of deputy Prime Minister and shared use of the 115-room grace-and-favour mansion and 3,000 acre estate at Chevening, Kent with his successor Liz Truss.

A spokesperson for the FCDO told MailOnline: ‘The Permanent Under-Secretary remained in close contact with the department throughout the time he was on leave.’