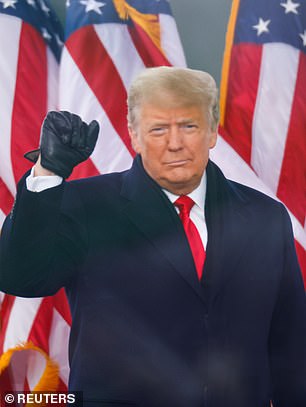 Former President Donald Trump phoned his ‘top lieutenants’ stationed at the Willard Intercontinental Hotel in Washington, DC to discuss ways to steal the election hours before his supporters stormed the US Capitol, The Guardian reported on Tuesday.

Trump’s top supporters in his effort to overturn Joe Biden‘s 2020 victory allegedly plotted how to prevent Congress certifying the election results from the upscale hotel the day before the riot.

On the evening of January 5 Trump reportedly made separate calls to his legal and non-legal aides to discuss avenues to stop the next day’s vote certification and delay the process until Congress received a new slate of electors.

The report claims the calls were separate on Giuliani’s insistence it would maintain attorney-client privilege.  It also cites ‘multiple sources’ without going into further detail on whether they were even present.

The calls, which would directly link the former president to his associates’ efforts to overturn a democratic election, reportedly took place a day after Eastman unveiled a memo outlining a theory of how then-Vice President Mike Pence could reject the existing results.

Pence as vice president would oversee Congress’ certification of electoral college votes. But according to Eastman, Pence could also use his role to kick the election down to the House or stop the session altogether and demand states send different electors over ‘election fraud’ concerns.

The Eastman memo was first reported in the book ‘Peril’ written by Washington Post journalists Bob Woodward and Robert Costa.

Trump allegedly complained about Pence’s refusal to go along with the plan in some of his first calls to the Willard from the White House.

Between the evening of January 5 and the morning of January 6 Trump reportedly told Bannon that Pence was ‘arrogant’ and recounted the meeting during which the vice president told Trump to count him out of any efforts to question the election.

On at least one other call, Trump asked his legal team to delay Congress’ certification until after January 6 to at least buy time to wage a pressure campaign on states to send new electors.

However the report notes that it’s unclear if Trump talked about stopping Biden’s victory ‘by any means’ after Pence refused to intervene, though if true the comments would align him closer with insurrectionists who stormed the Capitol looking to take back the election for Trump.

Multiple Trump lawyers there that night reportedly denied that Trump was looking to overturn the election but instead the team was only considering ways to delay it over ‘election fraud’ allegations.

Earlier this month the House Select Committee investigating January 6 announced it was looking into the alleged events at the Willard.

Today a federal appeals court will consider Trump’s bid to stop the committee from accessing his White House’s documents that the National Archives had already agreed to turn over.

On November 8 the panel announced subpoenas for Eastman, Miller and Kerik over their actions leading up to the Capitol riot including that meeting.

‘In the days before the January 6th attack, the former President’s closest allies and advisors drove a campaign of misinformation about the election and planned ways to stop the count of Electoral College votes,’ committee chair Democrat Rep. Bennie Thompson of Mississippi said at the time.

‘The Select Committee needs to know every detail about their efforts to overturn the election, including who they were talking to in the White House and in Congress, what connections they had with rallies that escalated into a riot, and who paid for it all.’

It’s unclear if the panel already knew about Trump’s alleged calls. DailyMail.com has reached out to the committee for comment on Tuesday’s report.

Bannon, an alleged participant at the January 5 ‘command center,’ was slapped with criminal charges for refusing to testify in front of the Democrat-led committee.

He was among the first high-profile figures in Trump’s orbit to be subpoenaed in lawmakers’ quest to know more about the events leading to the insurrection.

On Wednesday the committee will be voting on whether to refer another Trump lackey, former Justice Department lawyer Jeffrey Clark, for criminal contempt charges as well.