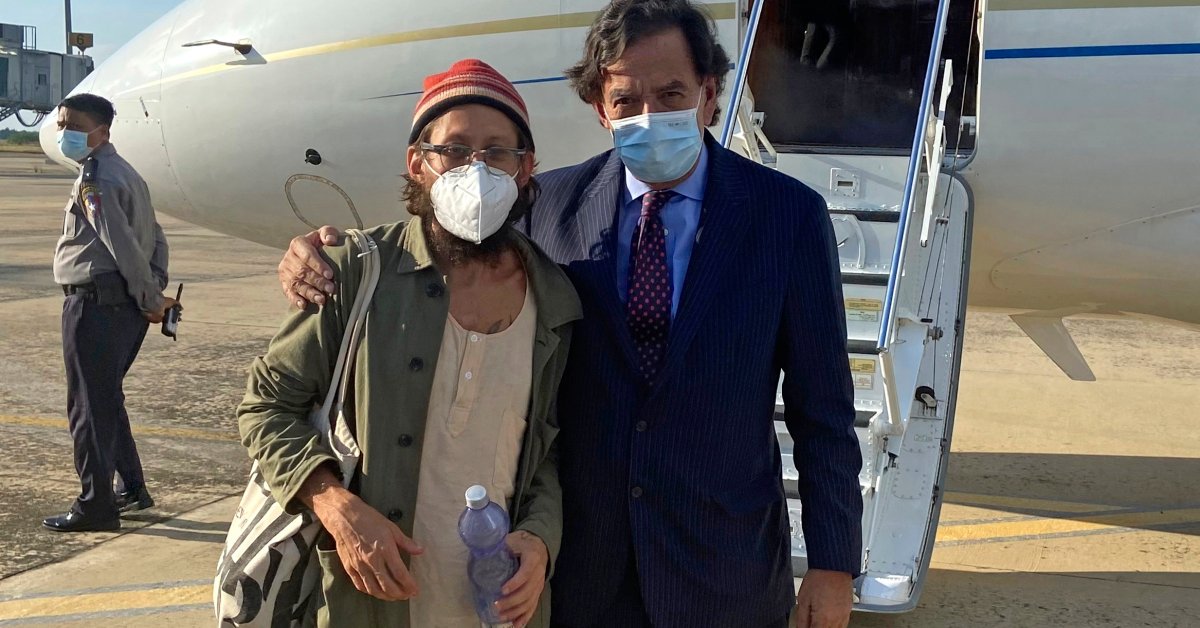 BANGKOK — American journalist Danny Fenster, who spent nearly six months in jail in military-ruled Myanmar and was sentenced last week to 11 years of hard labor, was freed Monday and began his journey home.

Fenster was handed over to former U.S. diplomat Bill Richardson, who helped negotiate the release, and the two landed in Doha, Qatar.

“I’m feeling all right physically,” a bearded Fenster, in baggy drawstring pants and a knit hat, told journalists on the tarmac. “It’s just the same privations and things that come with any form of incarceration. You just go a little stir-crazy. The longer it drags on, the more worried you are that it’s just never going to end. So that was the biggest concern, just staying sane through that.”
[time-brightcove not-tgx=”true”]

While still jailed, Fenster told his lawyer that he believed he had COVID-19, though prison authorities denied that.

Fenster, the managing editor of online magazine Frontier Myanmar, was convicted Friday of spreading false or inflammatory information, contacting illegal organizations and violating visa regulations. Days before his conviction, he learned he had been charged with additional violations of terrorism and treason statutes that put him at risk of an even longer sentence of life in prison.

He is one of more than 100 journalists, media officials or publishers who have been detained since the military ousted the elected government of Nobel laureate Aung San Suu Kyi in February, and his was the harshest sentence yet.

“This is the day that you hope will come when you do this work,” Richardson, a former governor of New Mexico and past ambassador to the United Nations, said in a statement emailed by his office. “We are so grateful that Danny will finally be able to reconnect with his loved ones, who have been advocating for him all this time, against immense odds.”

Fenster has been in detention since he was arrested at Yangon International Airport on May 24 as he was headed to the Detroit area to see his family.

“We are overjoyed that Danny has been released and is on his way home — we cannot wait to hold him in our arms,” his family said in a statement. “We are tremendously grateful to all the people who have helped secure his release, especially Ambassador Richardson, as well as our friends and the public who have expressed their support and stood by our sides as we endured these long and difficult months.”

The exact allegations against Fenster were never clear, but much of the prosecution’s case appeared to hinge on proving that he was employed by another online news site that was ordered closed this year during a crackdown on the media following the military’s seizure of power. Fenster used to work for the site but left that job last year.

Fenster, a native of the Detroit area, has a master’s degree in creative writing from Wayne State University, and had worked for a newspaper in Louisiana before moving to Southeast Asia, according to Deadline Detroit, a news website to which he was an occasional contributor.

His brother, Bryan Fenster, has said he had “passion for writing about folks who struggle and fight for social justice” and was particularly interested in the plight of people from the Muslim Rohingya minority, hundreds of thousands of whom fled Myanmar during a brutal counterinsurgency campaign by the army in 2017.

Frontier Myanmar Editor-in-Chief Thomas Kean said Fenster was “one of many journalists in Myanmar who have been unjustly arrested simply for doing their job since the February coup.”

According to the U.N., at least 126 journalists, media officials or publishers have been detained by the military since the takeover and 47 remain in custody, though not all of them have been charged.

In a statement broadcast on state TV, the military said that Fenster had been released at the request of Richardson and the chairman of the Japan-Myanmar Friendship Association. Japan, unlike the United States and the European Union, does not take a publicly confrontational stance with the military-installed government, and would like to see improved relations between Myanmar and the West.

The generals in Myanmar “were convinced that it wasn’t worth it to hang on to Danny,” U.S. Rep. Andy Levin of Michigan, who represents the Fenster family in Congress, told Detroit radio station WWJ. “He was innocent, and he was just an annoyance for them. If they kept him and anything really happened to him, we would never forget it. We would never forgive them.”

Richardson said he discussed Fenster’s release during a recent visit to Myanmar when he held face-to-face negotiations with Senior Gen. Min Aung Hlaing, the country’s ruler.

Richardson is known for traveling to nations with which Washington has poor, if any, relations — such as North Korea — to obtain the freedom of detained Americans.

He also has a long history of involvement with Myanmar, starting in 1994, when as a member of Congress he met Suu Kyi at her home, where she had been under house arrest ordered by a previous military government.

Shawn Crispin, Southeast Asia representative for the Committee to Protect Journalists, said Fenster “never should have been jailed or sentenced on bogus charges in the first place.”

“Myanmar’s military regime must stop using journalists as pawns in their cynical games and release all the other reporters still languishing behind bars on spurious charges,” Crispin added.