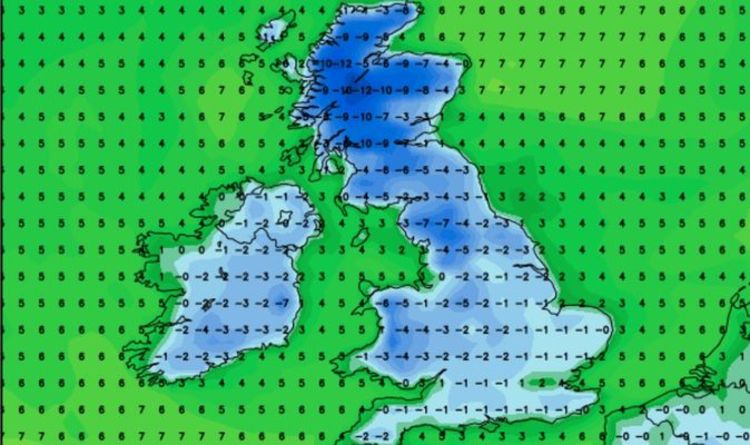 Britons are poised to experience bone-chilling temperatures later this month and into December as the mercury plunges to lows of -12C. Minimum temperature maps produced Netweather show the whole of the country turning icy-blue on Wednesday, December 1.

Netweather.TV described the cold snap as a “frosty regime”, with southern England “holding on” to the bitter weather.

Weather maps suggest freezing air is moving over the UK from the North Atlantic and Scandinavia.

The cold weather system begins to grip the UK from the end of November, before the wintry blast strengthens into December.

A stark change in conditions is expected from Friday, November 28, as overnight temperatures crash to -7C in Scotland, -2C in the North and just 2C in the South East.

The mercury is then poised to fall further over the next 24-48 hours as the bitterly-cold weather spreads southwards.

By the beginning of December, the low pressure system lingers northwest of Scotland, but the temperature maps show a blue area has engulfed the whole country, this suggests an average temperature of -7C.

Netweather.TVs long-range forecast from November 29 to December 5 says: “The early part of the week is likely to be cold and sunny with some overnight frost and fog patches, but mid to late week it will become cloudier and generally mild, especially by night.

“Some sunny intervals are still likely later in the week in sheltered parts of eastern Scotland and north-east England.

“Southern England will hold onto the cold bright frosty regime for longest. Also, during mid to late week we may see more changeable weather develop over Scotland, with rain belts mainly affecting the north and west of Scotland, perhaps penetrating further south and east at times but fizzling out as they do so.”

It adds: “The main risk for this period would be for a stronger area of high pressure to remain stationed west of the UK and struggle to extend into Northwest Europe.

“This would allow for colder northerly winds to be a bit more persistent during the first portion of December. “