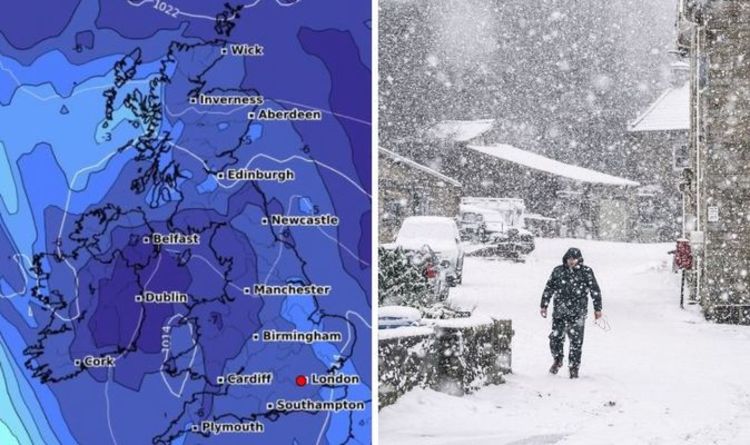 Britain has been smashed by a barrage of snow and plunging temperatures this weekend as Storm Arwen whips up vicious gale-force winds of up to 100mph. The Met Office has issued several yellow warnings for ice as well as two for the UK on Monday as the freezing conditions cause havoc. ​ Now the latest weather maps from WXCHARTS show a barrage of snow once again blanketing Britain early next month.

At midnight on December 5, the charts show up to 16cm of snow could fall in North West Scotland close to Inverness.

Around 4cm of snow is likely in an area of North West England, with the North East and Midlands also seeing a couple of centimetres.

This bitterly cold snap will continue into December 6, with deep snow forecast for north of the border and possibly the far north of England.

Snow will continue to be a real threat throughout the course of that week when on December 10, up to 16cm of snow is once again forecast for an area of North West Scotland, with 11cm more centrally.

The border of England and Wales could find itself under 7cm, with 4-5cm in North West England, North East England and an area of the Midlands near Birmingham.

The huge risk of snow across the UK will also trigger a plunge in temperatures, which could fall to as low as -11C as the Arctic freeze takes a firm grip.

Latest weather maps from Netweather for midday on December 5 show minimum temperatures plummeting to -7C in an area of North West Scotland, and falling below freezing throughout most of the UK – including London.

The mercury could crash to as low as -9C in Scotland later that evening while remaining below zero for a huge swathe of the UK.

“Snow possible at low-levels across northern England and Scotland for a time, before turning to rain away from high ground.

“Brighter showery conditions following, these frequent and heavy in the northwest, wintry over high ground.

“Continuing unsettled through the rest of this period with spells of wet and windy weather, interspersed with brighter interludes accompanied with showers.

“Likely the wettest conditions to be in the west and northwest, and drier conditions in the south towards the end of the period.

“Often windy with a risk of gales at times, especially in the north and northwest.

“Often mild, with the potential for brief colder interludes.”