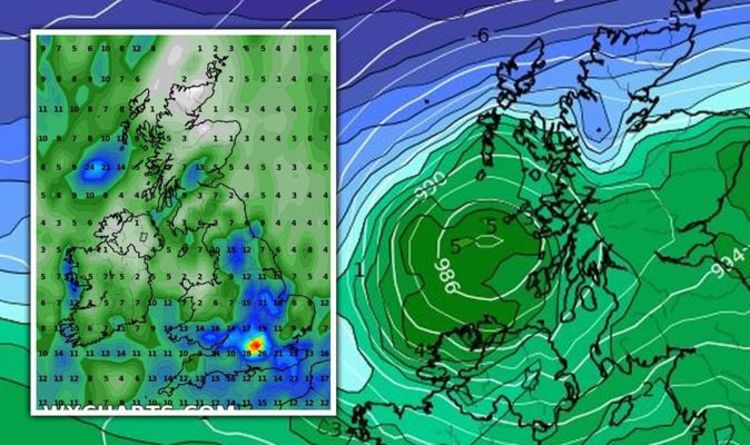 Charts and maps show the week ahead continues “unsettled” conditions, with winds and rains striking much of Britain in the run-up to 2022. However, new graphics show an Atlantic storm builds up and pushes across northern Britain by New Year’s Eve.

After a White Christmas for much of Scotland and northern England, conditions are set to be split for the start of the last week of 2021, with the North seeing colder conditions and the south enjoying warmer temperatures.

However, according to maps from WXCharts, by December 29 western fronts of rain and winds will strike Britain.

Much of the UK is set to be struck by the weather front, but the worst affected will be the west coast of Scotland as well as northern England and Wales, with 34mm of rain falling south of Port William.

By 9am on Wednesday, rainfall up to 5mm an hour will move eastwards over the UK, stretching across Northern Ireland as well as much of the midlands and Wales.

Wednesday’s front of weather is set to be clear for England by midday, however Scotland is set to soak for the rest of December 29.

After a relatively settled Thursday, Friday December 31 sees pressure systems form a cyclone of rain in the Atlantic.

As it hits 6am on New Year’s Eve, the storm begins to push northeastwards, spreading rains up to 1mm an hour over parts of Northern Ireland and causing havoc in Scotland, with 3cm of snow over Inverness and Wick.

Midday on January 31 sees the storm strike Scotland in full, with 5mm of rain over most of the country with the exception of Edinburgh.

By 6pm however, the worst of the storm will have passed over Scotland, with snowfall in the highest regions of the country and light rainfall in Aberdeen to end 2021.

Conditions across the rest of the UK are expected to stay dry, but brisk at 8C.

UK weather: Rains up to 1mm an hour will cause havoc in Scotland (Image: WXCHARTS)

Paul Michaelwaite, from Netweather.tv, said however “milder weather is taking over” after a freezing Christmas.

He said: “Temperatures will be contrasting north to south, with Northern England northwards struggling in low-single figures whereas southern England will reach 10-12c.

“Low pressure will then be crossing the country during Tuesday, so it’ll be another unsettled, messy sort of day with showers or longer spells of rain possible just about anyway.

“Although, they should ease back during the afternoon. Then, the theme continues through the remainder of the week and as we approach New Year.

“It’ll stay mild with temperatures peaking into the teens, but there’ll be frequent bands of rain or showers moving in from the Atlantic.”

UK weather: By 6pm, snow will fall over the highest parts of Scotland (Image: WXCHARTS)

The Met Office said in its long range forecast for New Years Day to January 9 Atlantic weather systems will continue to arrive from the west, bringing “unsettled weather”.

They said: “To begin, largely fine with brighter spells likely for some once rain clears eastward. Further rain arriving into the west and southwest later.

“Heading into January, further showers or longer spells of rain from the west are possible, perhaps bringing heavy rain to western hills. Drier, brighter and colder spells may develop between the rain at times, with spells of showers still possible.

“Driest conditions mainly confined in the southeast. Through this period, it will be rather windy with possible coastal gales in the west.

“Temperatures likely mild or very mild. A possible brief settled spell may develop towards the very end of the period.”

UK weather: The rest of the UK is expected to stay dry on News Years (Image: WXCHARTS)

BBC Weather’s long range forecast also holds the weather will be “changeable with some better days”.

They said: “Next week, high pressure is favoured over Iberia with the Atlantic storm track affecting the UK. The trend early next week will be changeable as a series of fronts move across the country.

“Later in the week, things remain active as further lows affect the country. Tuesday and Thursday are looking particularly wet for all parts of the country. There will be some breaks in the rain as transitory ridges move across.

“Right now, these better drier days are Monday and Friday. Temperatures around 1-2C above average but then rising 4-5C above normal mid-week.

“A further band of rain could move across the country on New Year’s Day but at the moment it appears it could mainly impact Scotland.”