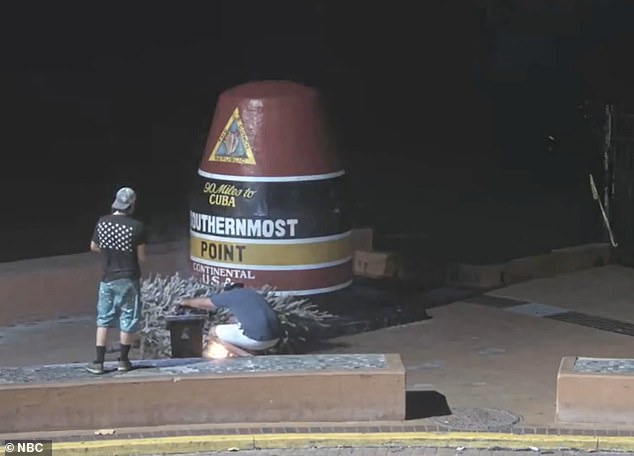 By James Gordon For Dailymail.com

Authorities said two men lit a Christmas tree on fire in front of the buoy around 3:30am on Saturday morning.

The incident, which was caught on video, shows two men placing a Christmas tree in front of the concrete buoy and then setting the tree on fire

The two men could be seen laughing and joking as they filmed the criminal act. ‘Extensive damage’ was caused to the buoy between 3 and 3:30am on Saturday

Webcam video of the buoy from a marketing company shows two people lighting the tree on fire near the marker as they take photos and selfies of one another.

The flames left a large black burn mark on the monument. The Key West Fire Department were called to extinguish the fire.

Tourists were seen gathering near the damaged buoy for pictures later on Saturday.

‘If anyone knows who these two jerks are…please contact the Key West police,’ one person wrote on Facebook.

It proclaims that Key West is 90 miles from Havana. Artists restored the monument after it was damaged during Hurricane Irma in 2017.

The red, yellow, black and white marker resembles a giant marine navigational buoy. Artists last restored the monument after it was damaged during Hurricane Irma in 2017