Well it’s hard to know where to start with that one.

Unfortunately controversial refereeing decisions will be the talking point from this Test match yet again as Wales centre Nick Tompkins is awarded a try.

Tompkins knocked the ball down from a Wallabies pass in an incident that was very similar to the Kurtley Beale yellow card.

He picked the ball up and ran away to score but didn’t look convinced he’d get away with it. 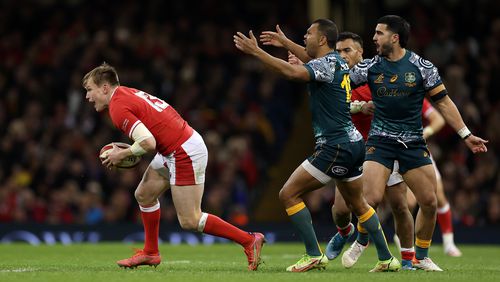 But after a chat with the TMO, referee Mike Adamson declares the ball has gone backwards and the try stands.

“The referee has had a howler,” Drew Mitchell says on Stan Sport.

“It’s one of the craziest tries we’ve seen in a long, long time,” Sean Maloney adds.

“There’s a chance that Andrew Mehrtens might self combust in the commentary box.”

Indeed, as Mehrtens says: “It makes a mockery of the knock on. That’s just crazy.”

What a gut punch for a game Australian side.