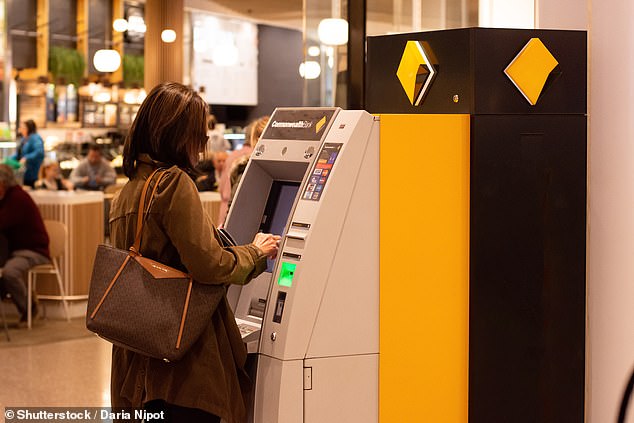 Many retailers have since the start of the pandemic encouraged their customers to use their credit or debit cards instead of old-fashioned cash.

Despite that, a new Reserve Bank of Australia issues paper said consumers were continuing to withdraw large sums of money from teller machines.

The value of banknotes in circulation has surged since the first case of Covid came to Australia, climbing by 20 per cent between February 2020 and October 2021.

Last month, $100 billion worth of banknotes changed hands, double the value of 2010.

But Australians aren’t withdrawing cash to buy things with, they are storing it under the mattress because they don’t trust the banks.

The RBA blamed worries about the Covid pandemic and lockdowns for the surge in consumers keeping money physically rather than leaving it in the bank, noting this was particularly prevalent during a crisis.

‘The store-of-wealth function performed by banknotes is particularly important during times of financial and economic uncertainty, such as the Global Financial Crisis and the Covid-19 pandemic,’ it said.

Even if Australians aren’t using cash for daily transactions like they did before the pandemic, they were still treating it like gold.

‘Cash is increasingly used as a store of wealth,’ the RBA said.

In 2018, two years before the pandemic, three-quarters of banknotes were ‘estimated to be hoarded’.

That adds up to between $50 billion and $75 billion in cash, equal to about 13 per cent of Westpac’s entire deposits of more than $600 billion, based on its full-year annual report.

Since the pandemic, high denomination money are more likely to be circulating with 73 per cent of them $50 and $100 banknotes.

Since the start of the pandemic, many retailers have encouraged their customers to use their credit cards instead of old-fashioned money (pictured is a Harris Farm sign in Sydney)

The Reserve Bank said pandemic changes made ATMs much costlier to operate, resulting in thousands being removed around the country like phone booths.

‘The declining use of cash for retail payments, accelerated by the Covid-19 pandemic, has placed pressure on the current cash distribution system,’ it said.

‘Specifically, lower processing volumes have led to under utilisation of cash distribution infrastructure and increased the average cost of transporting and processing banknotes.’

Even before the pandemic in 2019 just 32 per cent of in-person transactions were done with cash.

High cash users were more likely to be older, have a lower income, live in a regional area, or have limited internet access.

‘The majority of these high cash users indicated that they would suffer a major inconvenience or genuine hardship if they could no longer withdraw cash or if retailers stopped accepting cash,’ the RBA said.

The RBA blamed worries about the Covid pandemic and lockdowns for the surge consumers keeping money physically rather than leaving it in the bank, noting this was ‘particularly important’ during a crisis