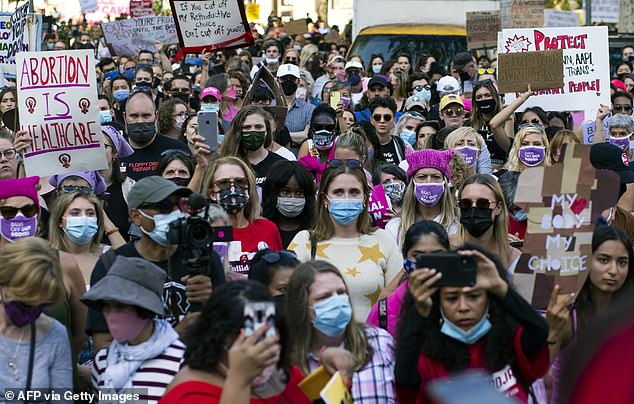 ‘It was a year of colonization’: Women’s March is slammed for ‘wokery’ after apologizing ‘deeply’ for email reporting an average donation of $14.92

By Stephen M. Lepore For Dailymail.Com

The organization behind the Women’s March took some heat on Tuesday after an apology for a reference to the year 1492 in a donation email.

The group, which was founded out of the 2017 march and organizes the annual event, sent out an email with the subject line ‘$14.92.’

The body of the email said: ‘We have an important favor to ask.’

Subscribers to the group’s email list were then asked if they’d be willing to donate $14.92.

The year 1492 is associated with Christopher Columbus’ sailing to the Americas. While Columbus still has a holiday with his name on it, many municipalities have changed it to Indigenous Peoples Day to respect the native peoples who Columbus slaughtered.

The Women’s March organization is behind the annual marches, which began in 2017 following the election of Donald Trump

The group apologized on Twitter for an email that asked for donations of $14.92

The group eventually tweeted an apology.

‘We apologize deeply for the email that was sent today,’ they said. ‘$14.92 was our average donation amount this week. It was an oversight on our part to not make the connection to a year of colonization, conquest, and genocide for Indigenous people, especially before Thanksgiving.’

They added that it ‘is committed to dismantling systems of oppression through nonviolent resistance and building inclusive structures guided by self-determination, dignity and respect.’

The group drew disdain on social media from all sides of the political spectrum.

Republican Texas Senator Ted Cruz said that the marchers ‘hate America’ and that his supporters should respond by donating amounts of $17.76 and $20.04.

Leftist Nando Villa wrote: ‘We did it. We finally held the Women’s March accountable for Columbus’ crimes.’

Former George W. Bush Press Secretary Ari Fleischer: ‘Let’s all chip in and and raise the amount to $17.76. Then they’ll really lose their minds.