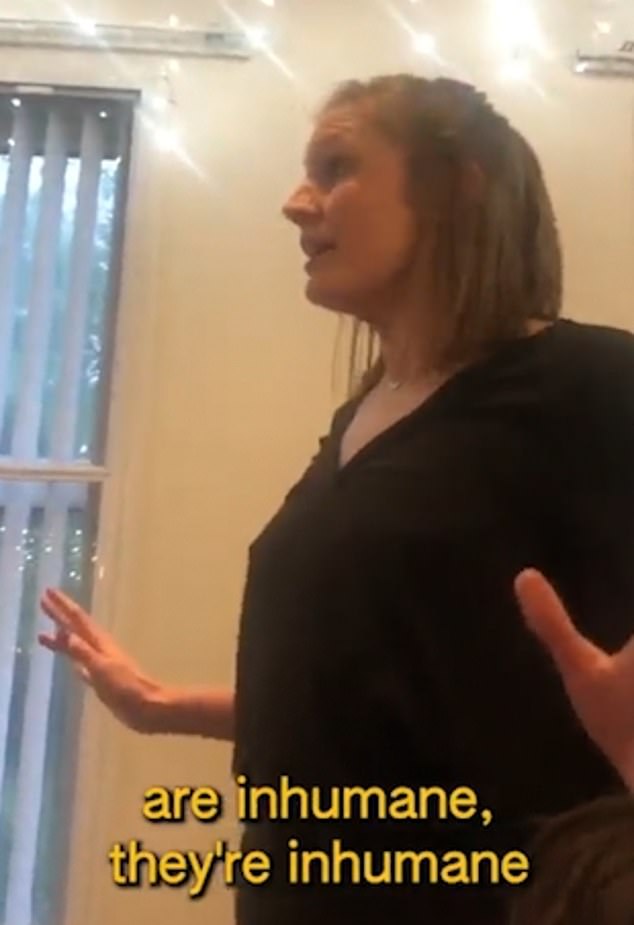 Yelling demonstrators disrupt Priti Patel speech at £40-a-head Conservative native occasion dinner in protest at her ‘merciless, racist and inhumane’ Rwanda boat individuals plan earlier than being dragged away as Tories chant ‘Out out out!’

By Laurence Dollimore For Mailonline

This is the second Priti Patel was ambushed by a bunch of protestors over her Rwanda migration coverage whereas giving a speech at a Tory dinner on Friday night time.

A video shared by marketing campaign group Green New Deal Rising exhibits a number of protestors abruptly arise one by one to ship a message to the Home Secretary.

The clip exhibits Ms Patel donning a pink gown as she approaches the rostrum on the Bassetlaw Conservatives Spring Dinner.

The cupboard minister manages to say: ‘Good night all people, I truly simply wish to begin…’, earlier than a protestor posing as a visitor at £40-a-head occasion abruptly stands up from her chair.

She shouts in direction of the stage: ‘Priti Patel your racist insurance policies are killing individuals. Your plans to ship individuals in search of asylum to Rwanda are inhumane, they’re inhumane and are going to smash individuals’s lives.’

The demonstrator is then escorted by safety, however then one other lady stands up from her chair and continues the protest, saying younger individuals are ‘disgusted’ by the controversial immigration coverage.

As she is ushered out, yet one more protestor will get up and types the coverage ‘merciless’, earlier than all of them start chanting: ‘Out, out, out!’

An additional man and lady stand up from their chairs, shouting that the coverage is ‘racist and problematic’ and ‘inhumane.’

The entire group can then be heard shouting: ‘Say it loud, say it clear, refugees are welcome right here!’

MailOnline has contacted the Home Office and Green New Deal Rising for remark.

The Green New Deal Rising group tweeted the video immediately, saying: ‘Last night time we disrupted @pritipatel as a result of her #Rwandaplan is merciless, morally bankrupt & it should price lives.

‘We demand the Government drops this broadly condemned coverage & offers help for individuals in search of security.

‘No matter the place we come from, all of us deserve dignity & respect.’

They added: ‘We’re sickened to see the Gov ramping up its hostile insurance policies slightly than serving to these fleeing from warfare, poverty & excessive climate.

‘And as a rustic with an extended historical past of exploiting individuals and sources, the UK should recognise its duty.

‘We name on the Government to offer an accessible & first rate system for individuals in search of refuge, to drastically reduce emissions and to pay its dues! #GreenNewDeal’.